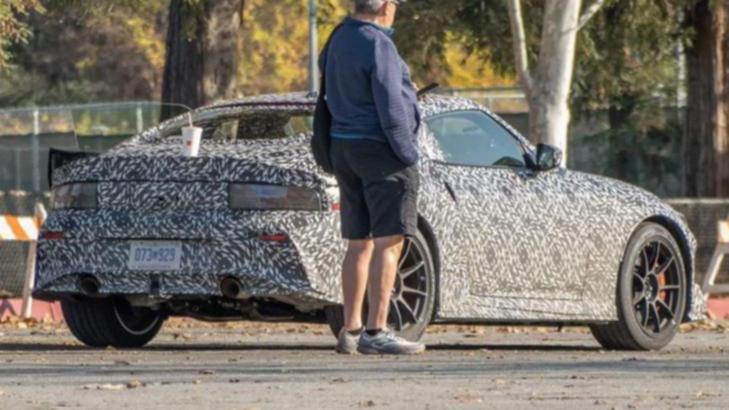 Nissan’s hotter Z seems to have been spied testing ahead of an expected reveal next year.

The 2023 Nissan Z Nismo, as seen in a series of images shared on Facebook and Twitter, features a raft of visible changes.

There are new wheels, wrapped in Dunlop tyres, behind which sit what appear to be bigger brakes, while there are also new bumpers.

Up front, there’s a more pronounced splitter while down back there’s a subtle rear wing.

A higher-output version of the Z’s twin-turbocharged 3.0-litre V6 is likely. The standard car produces 298kW of power and 475Nm of torque, and is mated with either a six-speed manual or a nine-speed automatic.

The outgoing 370Z’s Nismo variant packed an extra 8kW and 8Nm over the standard 370Z, and included a raft of mechanical enhancements that give us an indication of what changes we could expect to see with the Z Nismo.

It also featured a unique body kit with revised front and rear ends, a unique rear spoiler and side sills, and 19-inch forged alloy wheels, while the cabin featured Recaro front seats and plenty of Alcantara trim.

The 370Z Nismo was around $10,000 more than a regular 370Z, for context. The standard new Nissan Z is currently priced at $73,300 before on-road costs, regardless of whether you choose the manual or auto.

Nissan revealed the Z GT4 track car (above) at SEMA in November, perhaps hinting at aspects of the Nismo version. The GT4’s version of the Z’s 298kW and 475Nm twin-turbo six is tuned in this circuit car to 330kW and 600Nm

Nissan Australia managing director Adam Paterson told CarExpert the Z, launched this year as a replacement for the 370Z, has immediately proved popular despite its higher price.

The brand has a bank of 1200 undelivered orders for the new Z, having delivered just 84 units since the latest iteration of the iconic sports car launched earlier this year.

“The exciting part for Nissan with that car is that the customers that are putting their hands up for it and expressing interest are absolutely passionate about it, and [they] understand the way production works isn’t 1000 built one month and then none the next,” said Mr Paterson.

“So there is a little bit of a wait required, and they’ve been patient with us… we have customers that understand that they’re not necessarily available tomorrow,” Mr Paterson continued.

When quizzed about a general wait time for new orders, Mr Paterson indicated that the aim right now is to keep delivery times at “less than 12 months”, and noted that the situation with freight and supply challenges is constantly evolving.

“It’s tough to tell you whether that’s three months of orders, or five or six with all the different supply challenges and shipping challengers we’re facing, but the goal is definitely less than 12 months.”

The Z Proto launch edition, priced at $80,700 before on-roads, has already sold out.

According to the Nissan Australia website, customers wishing to place an order can ‘join the queue’ via an online form as a result of “overwhelming” customer response.