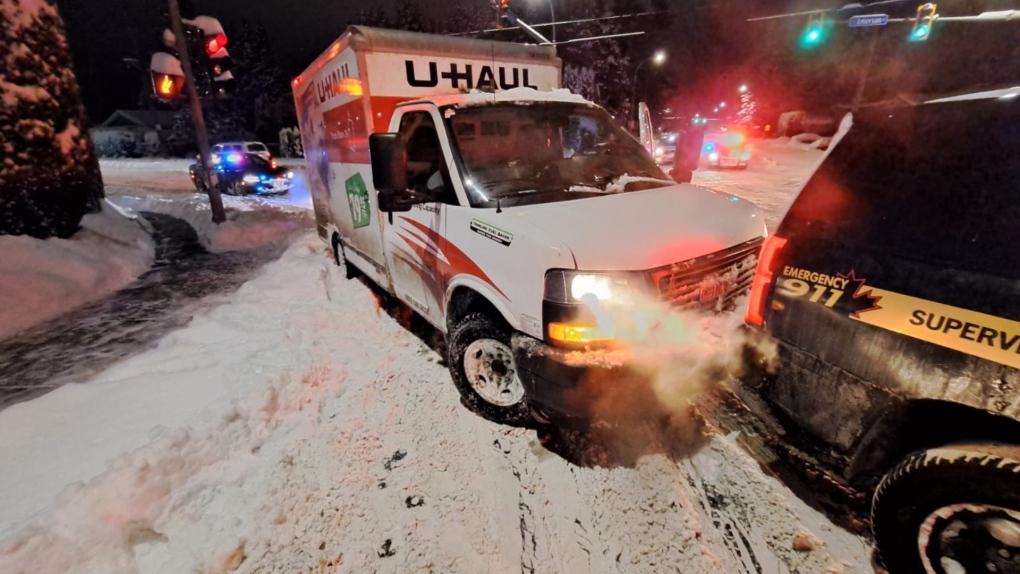 A suspect’s getaway attempt was thwarted this week by the snow blanketing B.C.’s Fraser Valley, according to police.


Authorities said the suspect was trying to evade capture in a U-Haul truck when the vehicle became stuck in the snow Tuesday evening in Abbotsford.


Staff Sgt. Chris Nightingale of the Abbotsford Police Department shared a picture of the aftermath on Twitter, describing the incident as a “true Canadian police chase.”


Officers began pursuing the vehicle after a witness reported seeing someone cutting the locks off a parked U-Haul.


In a statement, Abbotsford police said they spotted a suspect vehicle “travelling with much difficulty through minor snow-filled roads” around 8 p.m.


Officers managed to stop and arrest a 36-year-old suspect who was previously known to law enforcement. Russell Mayhew is facing several charges, including flight from police, wilfully resisting or obstructing police, breach of undertaking and driving while disqualified, authorities said.


Police also managed to recover several Amazon packages they suspect were recently stolen from porches in the city.


“The Abbotsford Police Department welcomes reports of suspicious activity by the public as we are stronger together in stopping and preventing crime and getting offenders into custody,” Const. Art Stele told CTV News in an email.


“We wish everyone a safe and joy-filled holiday season as we diligently patrol and work together to keep our community safe.”