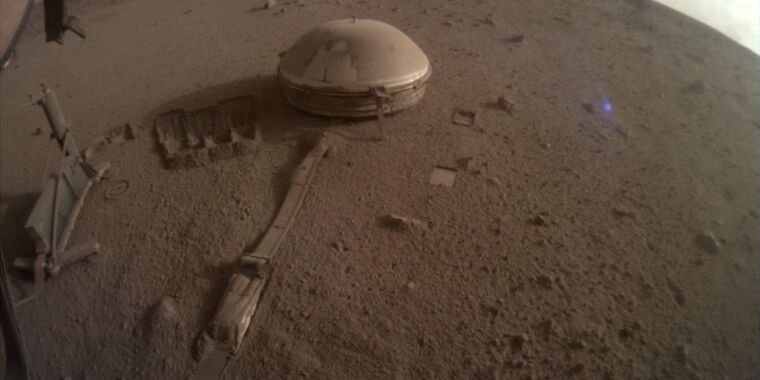 NASA’s InSight lander has probably phoned home for the last time from the planet Mars.

The space agency said the spacecraft did not respond to communications from Earth on Sunday, December 18. The lack of communications came as the lander’s power-generating capacity has been declining in recent months due to the accumulation of Martian dust on its solar panels. NASA said that it is “assumed” that InSight has reached the end of its operations but that it will continue to try to contact the lander in the coming days.

Also on Monday, the InSight Twitter account shared a photo with a message saying this was probably the last photo it was sending from Mars.

My power’s really low, so this may be the last image I can send. Don’t worry about me though: my time here has been both productive and serene. If I can keep talking to my mission team, I will – but I’ll be signing off here soon. Thanks for staying with me. pic.twitter.com/wkYKww15kQ

InSight landed on Mars in 2018 with the aim of studying seismic activity. It has been a success—InSight has detected more than 1,300 marsquakes, including a relatively powerful magnitude 4.7 quake on May 4. This was the largest marsquake detected to date and at the upper limit of what scientists hoped to observe. This seismic activity has allowed scientists to tease out details about the inner structure of the red planet.

However, during its operations on Mars, dust has steadily accumulated on the stationary lander’s solar panels. By May 2022, the panels were producing just 500 watt-hours of energy, a tenth of what they could generate upon landing on Mars. Since then, its power levels have steadily declined to the point where InSight does not have the juice necessary to radio back to Earth.

Saying goodbye to spacecraft such as InSight is always difficult. Humans send these robotic probes out into the frigid depths of the Solar System to increase our scientific understanding. Over that time, they shine brightly for a few years. And then, they’re gone.

Look, I’m not sure why water is running down from your eyes. But speaking for myself, that’s Martian dust causing tears to come out of my eyes. That’s my story, and I’m sticking to it.