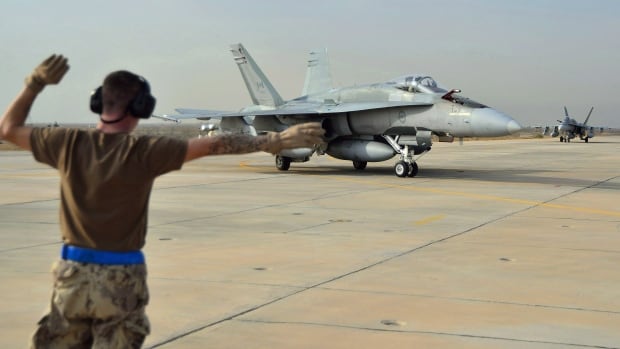 While the Royal Canadian Air Force plans to add more control over how fighter pilots get their call signs, a senior officer says there are no plans to abolish the nicknames — or the social gatherings where they are handed out.

In an interview with The Canadian Press, Maj.-Gen. Iain Huddleston said he is aiming to have a formalized process for assigning call signs in place by the end of January.

Yet he also defended such nicknames as important for morale and esprit de corps.

“They’re a tool that’s been used for many years to bring those teams that are focused on fighter operations together,” Huddleston said. “So, I think it’s important to have that team spirit, that esprit de corps, that camaraderie.”

Huddleston’s comments follow a disciplinary hearing last week in which two senior officers under Huddleston’s command were reprimanded and fined for not intervening after a sexually inappropriate call sign was assigned to a junior fighter pilot.

The call sign, which was homophobic and targeted a female pilot, was assigned during what is known as a “call sign review board” on June 22 at one of Canada’s two fighter-jet bases, 4 Wing Cold Lake, Alta.

Despite their official-sounding name, such boards are social events where pilots tell funny or embarrassing stories about each other over drinks before deciding on an appropriate nickname for new aviators.

Yet he also said that he does not want to change the basic structure of such review boards, adding: “They’re still going to be social events, because it is about esprit de corps. And I feel that it is still a tradition that we want to support, but with structure.”

Exactly what form that structure will take remains uncertain, but Huddleston said one idea is to have a senior member in the room who will not drink and whose job is to control the group.

“Someone has to be there to be able to say: ‘Hey, this is stupid, knock it off,”‘ he said.

Asked how a roomful of fighter pilots would assign such a name at a time when military members are supposed to have been warned about inappropriate sexual behaviour, Huddleston said he was at a loss.

He also couldn’t say why Col. Colin Marks and Lt.-Col. Corey Mask, who were the senior officers in the room, didn’t intervene.

However, he said both have accepted responsibility and worked to understand the harm that was caused by their failure to act.

The two officers pleaded guilty during a summary hearing held in front of 50 Air Force members at 4 Wing Cold Lake on Monday.

Marks was deprived of eight days’ pay while Mask lost five days of pay.Marks and Mask are also receiving a six-month “mentorship” to ensure they learn from their mistake, Huddleston said.

That mentorship, which Huddleston is conducting with Marks while 4 Wing commander Col. David Turenne works with Mask, involves various discussions about leadership and reviews of the military’s orders on sexual misconduct.

The mentorship program falls under what the military has described as its “reintegration framework.” Launched earlier this year, the framework aims to help Armed Forces members learn from mistakes, rather than simply kicking them out.

“I think it gives us a path to allow people to make mistakes, reasonable mistakes, and then move forward and be part of a cultural evolution,” Huddleston said.

It remains unclear what position Marks, who was poised to take command of Canada’s other CF-18 base in Bagotville, Que., and Mask will be assigned in the future. That decision will be up to Air Force commander Lt.-Gen. Eric Kenny and defence chief Gen. Wayne Eyre.

Lori Buchart, who previously served as co-chair of “It’s Not Just 20K,” a support and advocacy group created by victims of military sexual misconduct, said they should be required to take specific actions before being considered for another command position.

“For instance, they have to show they’ve learned by making connection with the (military sexual trauma) community,” she said. “They have to understand how their actions caused pain and suffering. They also need to know their role in preventing this from occurring again.”

She added: “If they were to be immediately appointed to a command position without some sort of restoration and time for reflection and learning, this would be a mockery of all CAF says they are doing to bring about meaningful change.”