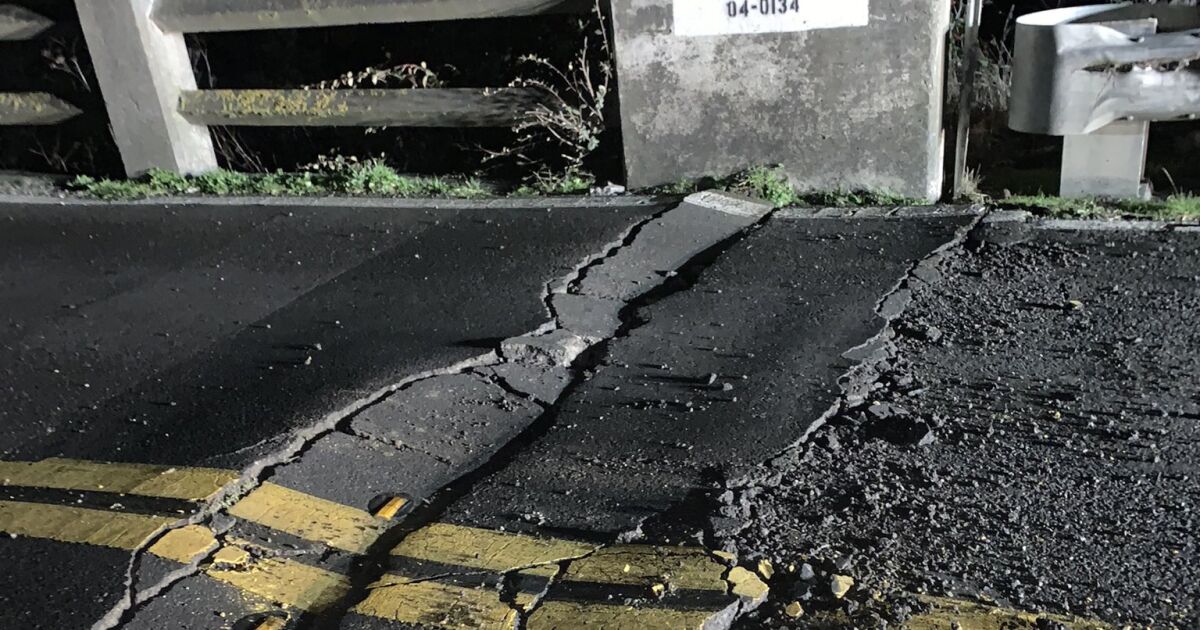 A magnitude 6.4 earthquake that rattled Northern California early Tuesday has resulted in at least two deaths from medical emergencies, causing damage across the region and leaving tens of thousands without power in Humboldt County, according to authorities.

The quake was reported at 2:34 a.m. just offshore about 7½ miles southwest of Ferndale, according to the U.S. Geological Survey. No tsunami was expected, the Sheriff’s Office said on Twitter, but the agency advised residents to prepare for aftershocks.

According to the Humboldt County Sheriff’s Office, two individuals have died as a result of medical emergencies occurring during or just following the earthquake, and at least 11 people have sustained injuries.

There was one fatality in Rio Dell during the earthquake, Rio Dell Mayor Debra Garnes, said, but it is unclear if it was related to the tremors.

A call came in during the earthquake about someone having difficulty breathing. The person went into cardiac arrest and medics performed CPR, Garnes said. The person was taken to a hospital but did not survive.

There have been dozens of aftershocks since the initial quake, according to the USGS, including a magnitude 4.6 shaker 4½ miles northwest of Rio Dell.

“It was the most intense earthquake that I’ve felt,” Garnes said. “It was a long-duration earthquake, so it was not only significant in size at 6.4, it was also long.”

She then had to get to work, coordinating with Rio Dell’s building department and volunteer fire department to check on structural integrity of homes as well as the dozens of emergency calls that were flooding in from residents. City officials expect about 50 to 150 people to be displaced by the earthquake.

“Our biggest issues are no electricity and no water. Structural damage is the next thing on the list,” she said. “Our water system got really wrecked. So many leaks.”

Arcata residents Amy Uyeki and Reese Hughes were asleep when they felt the earthquake. The power went off immediately.

“Afterwards, you feel sort of dizzy,” Uyeki, 65, said. “When it was happening, I thought it was the big one, because we haven’t felt anything this strong.”

The couple dropped to the floor and said the shaking lasted about 15 seconds. “This was very disconcerting, because it happened at nighttime, and you can’t see how much has gone down until you go around with your flashlight,” Hughes, 69, said.

The earthquake yanked shelves off the walls and broke some items in the house, but the house’s structure was undamaged. Hughes said the last time he felt an earthquake of this magnitude was in April 1992, when a 7.1 quake rattled Humboldt County.

There was extensive damage to roads and homes, Karges said. Most of the destruction is in Rio Dell, Fortuna, Ferndale and Scotia in the Eel River Valley. There was one confirmed structure fire in Rio Dell associated with the earthquake that has since been put out, said state Sen. Mike McGuire, a Democrat who represents Humboldt County.

According to PowerOutage.us, more than 70,000 people across Humboldt County — the majority of its residents— were without power. Pacific Gas & Electric was working to restore power, Karges said. The company estimated on its website power could be restored around 10 p.m.

Several gas leaks were reported, as well as damage to water lines, Karges said. PG&E tweeted that it “initiated its emergency response plan, and crews are responding to gas and electric hazards.”

There were no reports of damage to major roads, said Sgt. Caleb Carsey with the California Highway Patrol in Humboldt County, who described the earthquake as “pretty violent.”

Tony Tavares, director of the California Department of Transportation, said an inspection team was evaluating bridges, structures and roadways in Humboldt County. Fernbridge, a historic Humboldt County landmark built across the Eel River in 1911 to connect Ferndale to U.S. 101 via State Route 211, suffered some damage, he said. It is currently closed.

The bridge was cracked in four places, according to a CHP incident log. Pictures on Twitter showed the pavement fractured in several places. Crews were dispatched for an integrity check, Carsey said.

The Governor’s Office of Emergency Services said on Twitter that it was coordinating with local and tribal governments on damage assessments and support with aid and other resources. The California Department of Forestry and Fire Protection, California Geological Survey and Caltrans are among the agencies assisting in response efforts.

McGuire said that both state and local emergency systems have so far worked well together in this isolated coastal corner of California. “It’s a remote area,” McGuire said. “All levels of government [are working] together to ensure a rapid response.”

“It is being described as a long, violent shake,” McGuire said. “Individual residents are reporting that entire bookshelves and kitchen cabinets were emptied by the shaking. This was not your typical shaker that Northern California is used to.”

While those closer to the epicenter reported feeling the quake, the shaking was actually weaker than expected at greater distances, said Richard Allen, a seismologist and director of the UC Berkeley Seismological Laboratory.

Mark Ghilarducci, director of the California Governor’s Office of Emergency Services, said the state’s new early warning system was able to send alerts 10 seconds in advance of the quake to some 3 million people in Northern California, giving them the opportunity to drop, cover and hold on.

Ghilarducci said there are no confirmed quake-related fatalities. There are reports of minor to moderate injuries, mostly stemming from furniture falling over, he said.

Allen said that the MyShake app, which was built by UC Berkeley, sent notifications to around 271,000 phones about the earthquake. It was the biggest earthquake since the MyShake warning system was set up.

“This is getting up there, but it’s not at the level where events do a lot of damage,” Allen said. “This is reminder of the impact of earthquakes and the impact that it’s going to have on us.”

Many residents reported receiving an alert on their phone, including during the event.

Greta Turney, superintendent of the Kneeland Elementary School District whose sole campus, Kneeland Elementary, was closed Tuesday, said in a text that she received her shake alert as she was “transfixed” by her swaying ceiling fan.

A screenshot of the notification she posted shows it came in at 2:34 a.m. from the USGS and read “Earthquake Detected! Drop, Cover, Hold On. Protect Yourself. —USGS ShakeAlert.”

Turney, who lives in Kneeland, about 15 miles from Eureka, said in a text that she almost never feels quakes, but this one was “REALLY big.” She’s heard from colleagues, friends and family in Eureka and Arcata who reported shattered glass from mirrors and broken dishes and cups that fell during the quake. One friend had her kitchen ceiling cave in, Turney said.

Garnes, the Rio Dell mayor, said she was jolted awake by the earthquake.

“It was the most intense earthquake that I’ve felt. It was a long duration earthquake, so it was not only significant in size — at 6.4 — it was also long,” the mayor told The Times.

She then had to get to work, coordinating with the city’s building department and volunteer fire department to check on the structural integrity of homes as well as dozens of emergency calls flooding in from residents. Garnes said that about 60 emergency calls came through in the immediate aftermath of the quake.

Jennifer Savage, 53, who lives on the Samoa Peninsula just outside Eureka, said she’s familiar with earthquakes, particularly small rumbles that hardly rouse her from bed. But “this was scary,” she said, adding that she received an alert, but her phone was on “Do Not Disturb” mode. “It was just really a violent shaking, not one of those rolling ones,” Savage said.

Her home was littered with broken glass, mostly from picture frames and cups falling off the walls and shelves. A glass of water on a bedside table wound up drenching her, she said.

“We were up for a while trying to do the best we could cleaning it up in the dark with a flashlight,” Savage said.

Arcata residents Amy Uyeki and Reese Hughes were asleep when they felt the earthquake. The power went off immediately.

“Afterwards, you feel sort of dizzy,” Uyeki, 65, said. “When it was happening, I thought it was the big one, because we haven’t felt anything this strong.”

The couple dropped to the floor and said the shaking lasted about 15 seconds. “This was very disconcerting, because it happened at nighttime, and you can’t see how much has gone down until you go around with your flashlight,” Hughes, 69, said. The earthquake yanked shelves off the walls and broke some items in the house, but the house’s structure was undamaged. Hughes said the last time he felt an earthquake of this magnitude was in April 1992, when a 7.1 quake rattled Humboldt County.

The quake struck along the coast south of Eureka in a seismically active part of California. It was felt across the North Coast region.

Exactly one year ago, the same area was hit by a magnitude 6.2 quake that shattered windows and caused other damage.

Since the 6.4 earthquake, there have been an estimated 80 aftershocks, including three registering 4.6, 4.0 and 3.9, said Cindy Pridmore, a geologist with the California Geological Survey.

The USGS’s earthquake forecast shows a 13% chance of a magnitude 5 or larger earthquake, Pridmore said, but that could change. “People do need to be prepared, especially if they’re in weakened structures, to be mindful of where they’re staying,” Pridmore said.

The USGS said Tuesday’s quake occurred 17 miles from Eureka, 24 miles from Arcata and 30 miles from McKinleyville.

In the last 10 days, there have been no earthquakes of magnitude 3.0 or greater centered nearby.

An average of five earthquakes with magnitudes between 6.0 and 7.0 occur per year in California and Nevada, according to a recent three-year data sample.