Support for changing the date of Australia Day has grown, two new polls have shown.
An Essential poll commissioned by The Guardian found 26 per cent of around 1,000 people surveyed were supportive of creating a new date to replace Australia Day, up from 20 per cent in last year.
Backing for this option has steadily climbed since 2019 when 15 per cent thought there should be a new date.
Support among young people is particularly high, with 45 per cent of 18 to 34 year olds backing this option, compared to 25 per cent of those aged 35-54, and only 13 per cent of those aged over 55 years old.

The poll this year also found 33 per cent supported the option of creating a separate day to recognise Indigenous Australians while keeping the 26 January holiday, with support for this option rising and falling over the years. Overall support has come down since 2019 when it was at 37 per cent. There is growing support for changing the date of Australia Day, especially among young people. Source: AAP / David Crosling

Around 33 per cent did not support a separate day for Indigenous Australians, which is up from 29 per cent last year, but is down from the 2019 figure of 40 per cent.

Growing support for changing the date of Australia Day is also reflected in a survey commissioned by conservative think tank, the Institute of Public Affairs (IPA), which does not support changing the date.

IPA senior fellow John Roskam said those who wanted to keep Australia Day on 26 January should not be complacent.
“If we don’t fight for Australia Day, we’ll lose it,” he said.
Mr Roskam also noted support was lower among younger age groups. 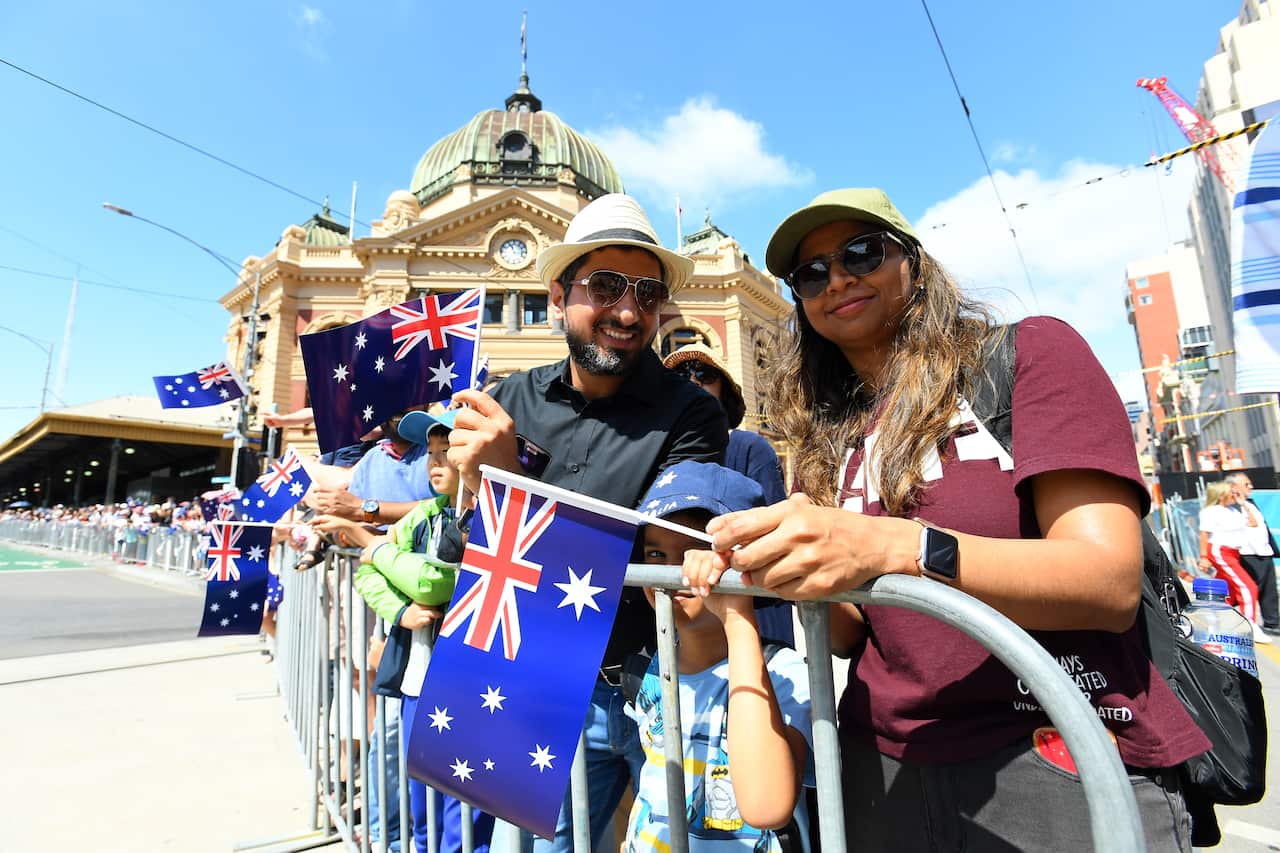 Other polls have indicated even higher support for changing the date of Australia Day.

A 2018 poll by The Australia Institute found 56 per cent of respondents didn’t mind which day Australia Day was held on, so long as there was a national day of commemoration, while 49 per cent said it shouldn’t be on a day that offended Indigenous people.
The view among new migrants and refugees appears to be mixed.
A survey commissioned by refugee and migrant settlement agency AMES Australia this year, which only had a small sample size of 150 people that makes it more susceptible to error, found only 25 per cent of those surveyed were aware of the controversy around 26 January.
Those who were aware were split evenly over the issue of changing the date with 38 per cent supporting a change, and 36 per cent opting for the status quo. A further 26 per cent did not have a view.

The survey found only 31 per cent knew the significance of 26 January – that it marked the arrival of the First Fleet in Sydney Cove. Around 68 per cent planned to celebrate the day in some way.

There has been increasing support for changing the date of Australia Day in acknowledgement of opposition from Indigenous groups, with many referring to it as Invasion Day or Survival Day. This year, many organisations including Woolworths, Telstra, Network Ten, Deloitte, KPMG, EY, PwC, Woodside Energy, and even the University of Wollongong, are .

The Victorian Government has quietly
The federal government is also allowing public servants to take an alternative day off, and has also overturned laws forcing local councils to hold citizenship ceremonies on 26 January.
According to the Essential poll, around 8 per cent of those surveyed said they would be working this year, which is only 1 per cent higher than last year. But just 30 per cent said they would be doing something to celebrate Australia Day, with 53 per cent saying they considered 26 January as just another public holiday.
Prime Minister Anthony Albanese has brushed off claims his government will seek to move Australia Day.

Historian Jane Lydon of the University of Western Australia said change seemed to be inevitable now that many organisations were allowing workers to take alternative days off, eroding the primacy of 26 January.
“I think we’re living through a very historical moment of transformation,” she said.
Professor Lydon said she thought there had been a widespread misunderstanding that Australia Day had always been held on 26 January, which is not the case.
“I think people have lost that sense of history and historical change,” she said.

She said there was a segment of the population that believe events like Australia Day are about consensus, values and mainstream shared principles of democracy and citizenship.

“Rather than seeing it in that longer term, historical context – looking at the big picture – they’re seeing it purely in terms of a debate about much more specific issues [such as] do we celebrate our past? Or should we be ashamed of it? Do we make Aboriginal people the centre of our history and exclude white people or do we maintain the status quo?
Professor Lydon said she thought another barrier was there was not a clear alternative and no one was strongly campaigning for an alternative day.
“The 26th of January is a time when a lot of Australians are at the end of the summer, they’re at the beach, they’re relaxed, they want to have a barbie,” she said.
“Aussie culture likes to have Australia Day at this great moment, they want to play cricket on the beach and think of it that way.”
But Professor Lydon said she did not think any alternative date had to necessarily be attached to a historical event.
“I think people love this sort of timeline history … but that’s not what history is all about,” she said.

“To me history is about understanding the context, what was going on, the process, it’s not about just sticking a pin in a calendar and saying ‘this means that we understand and respect the past’.”