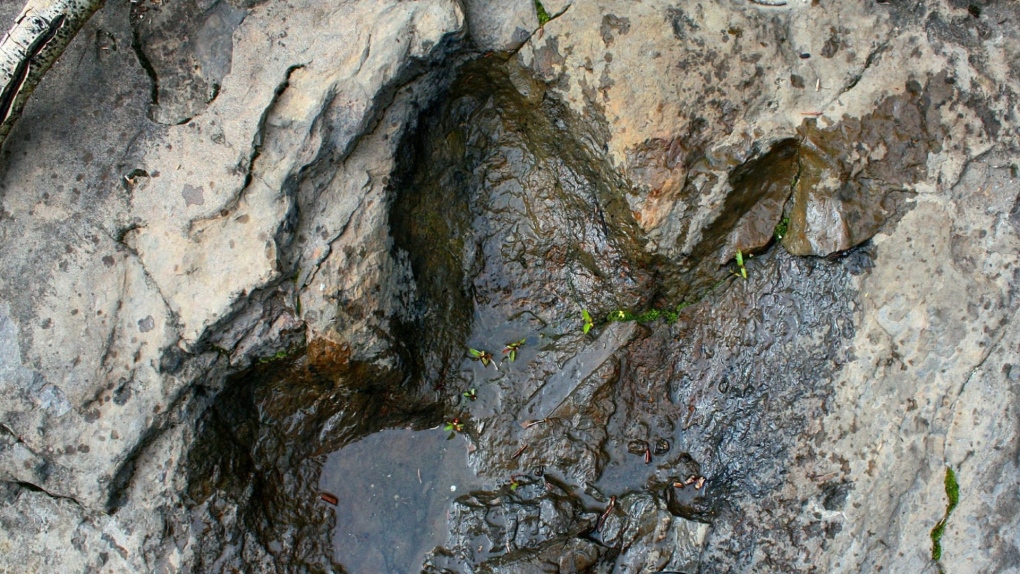 A man who dug up fossilized dinosaur footprints from a protected site in Northern B.C. has been sentenced to 25 days in jail and ordered to pay a $15,000 fine.


In a decision handed down earlier this month, a provincial court judge described the damage done to the Six Peaks Dinosaur Track Site near Hudson’s Hope when Bennward Ingram, along with three others, vandalized the site in 2020.


“Surveillance photos and witnesses reported four men driving in two vehicles and using power tools to remove individual tracks from the site over a period of at least two-and-a-half hours, the court heard.


“Large slabs of fossil tracks were either removed, or were damaged by being broken up, and were possibly destroyed. The power tools used included a portable generator, air compressor and air chisel, and heavy-duty hand tools including sledgehammers and pry bars. Mr. Ingram was observed using a sledgehammer and pry bar and other excavation tools.”


The men, the court heard, stopped what they were doing and fled when witnesses arrived. The fossilized footprints have never been recovered.


Ingram was charged under the province’s Land Act and pleaded guilty to one count of unlawfully excavating on Crown land. The site was designated as protected in 2016.


Judge Darin Reeves’ sentencing decision describes the site as one of the most important in North America, with preliminary studies revealing more than 500 dinosaur footprints.


“These tracks represent diverse dinosaurs from the Early Cretaceous epoch who walked on sandy ground approximately 125 to 113 million years ago, following which their tracks were fossilized,” the decision says.


Further, the site contained 56 separate “trackways,” which the judge explained can give researchers unique insight into how the dinosaurs lived and behaved.


“Damaging and removing an individual footprint not only destroys that footprint for its scientific value, it also disturbs the integrity of the remaining tracks and landscape and the series of tracks of which it was part,” Reeves said.


In addition to the damage done by removing the footprints, the court found the “illegal excavation” will ultimately accelerate erosion, continuing to cause damage in the future.


“A significant degree of scientific information has been lost and will continue to be lost,” Reeves said.


The court decision notes that the site is on the traditional territory of the Saulteau First Nations, which submitted a community impact statement to the court. The destruction of the site, the court heard, undermined its safety and sovereignty.


“Several additional First Nations cultural locations are found close to the (site) and community members are now fearful that additional acts of vandalism may occur in these otherwise remote and culturally important areas,” the court heard.


The potential of the site as a destination for researchers and eco-tourists was diminished by the damage done which the court noted would also have an impact on the Saulteau First Nations’ plans for the area.


“Their traditional territory has been damaged, a source of cultural reflection has been interfered with and along with the rest of B.C., a potential source of economic development has been harmed,” Reeves said.


In weighing a fit sentence the judge outlined several aggravating factors, including the extent of the damage done which he described as ‘significant” and “permanent.” The judge also described the offence as one that required “planning and preparation.”


“Mr. Ingram frankly admitted to the court he had no excuse for his actions, that he did not appreciate the importance of the site to the First Nations or science, and expressed deep remorse for his actions and the damage he created,” Reeves said.


The need to deter similar acts in the future was another consideration.


“Sites like the SPDT are often in remote locations that are not easily monitored and rely on courts like this to impose sentences that will give pause to others who may seek to engage in the same behaviour,” Reeves’ decision concluded.


In addition to the jail sentence and the fine, Ingram was also ordered to pay a victim surcharge of $4,500.