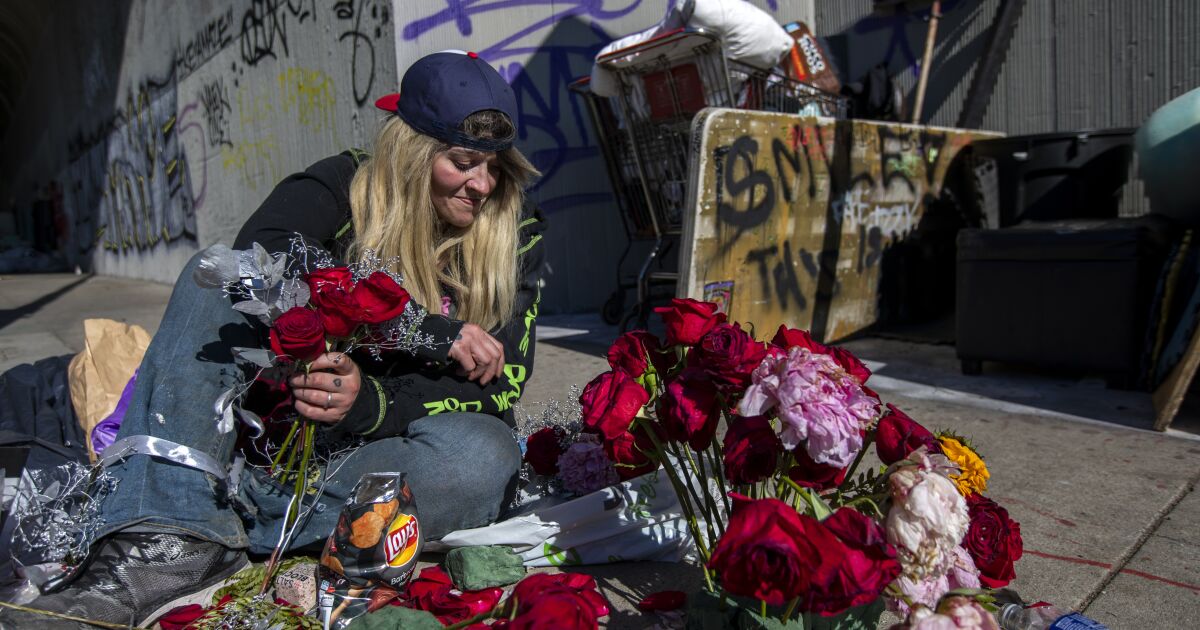 Seated on the hard sidewalk along Cahuenga Boulevard, Rue Ryan arranged a batch of red roses she had plucked from the trash into a memorial for her “street mom,” Hyper, who died two years ago.

The work was an escape from the activity around her, as friends and fellow encampment residents hurriedly prepared to move into nearby hotel rooms, choosing what to keep or toss.

Outreach workers had counted about 25 people living under a 101 Freeway overpass in Hollywood, and on Tuesday, 11 of them went to one of three nearby hotels. A hot shower, a good night’s rest — these are luxuries housed people take for granted, Ryan said, and would help her find a job, some security and a permanent place to live.

“It’s dangerous out here. People are getting trafficked. People are getting killed,” said Ryan, a 32-year-old Alabama native. “You can’t sleep if you’re staying on the streets. So you’re exhausted. You’re not going to work. You look filthy and smell. Nobody wants to deal with you. How can you move forward in life? That’s why people get stuck out here so long.”

Ryan hoped to get a hotel room of her own as part of Los Angeles Mayor Karen Bass’ “Inside Safe” initiative, which Bass unveiled Wednesday, nine days after she declared a citywide state of emergency on homelessness. The declaration she signed Wednesday formally kicks off a determined effort to clear encampments by offering people such as Ryan hotel and motel rooms.

Fellow politicians, nonprofit providers and some activists have applauded the urgency and focus that Bass is bringing to moving people off the street and into temporary housing, from which social workers can help them find permanent housing.

In the first two weeks of her administration, Bass has sought to centralize the work of identifying encampments with the most vulnerable people and which are the biggest sources of frustration for nearby residents. She has also focused on identifying the steps in the process that delay people going indoors, or housing from being built.

What occurred at the encampment on Cahuenga was effective, providers say, because they had hotel rooms rented and ready for people to occupy.

“The pace at which Inside Safe can bring people indoors from encampments across the city will largely depend on the availability of beds,” said Cheri Todoroff, executive director of Los Angeles County’s Homeless Initiative. “What the city is doing that will likely be a game changer is accelerating housing placements, both in interim and permanent housing.”

More buildings master-leased — a process in which the city would take control of entire hotels or motels — means more people off the streets. But it remains to be seen whether the city can lease enough beds to meaningfully reduce or eliminate large encampments across Los Angeles.

Bass has made clear she wants to work closely with Todoroff’s bosses — the five Los Angeles County supervisors — appearing before them Tuesday to talk about the need for better partnership between the bureaucracies. The county does much of the funding and contracting of the outreach work taking place on city streets.

The county will be expanding some of these different outreach teams in the coming year, which will bolster the plans that Bass and council offices have to address large encampments across the city.

Still, providers say the work of gaining a homeless person’s trust to persuade them to move off the street is easier when a bed is available along with transportation to it. Case in point: A city Dash bus idled in position Wednesday, poised to ferry people to a motel once they were ready and had packed the two bags they were allowed to bring.

As people moved out of their makeshift structures, sanitation workers quickly moved in to throw away large items and dispose of what was left behind. Homeless people have often complained that this work by the Sanitation Department causes them to lose personal items and important documents.

Bass appeared cognizant of this broader challenge Wednesday as she highlighted how this effort on Cahuenga followed the approach that had been developed at large encampment cleanups across the city in 2021. She made clear that these operations weren’t being led by law enforcement and that she didn’t want to see homeless people ticketed or punished for living on the street.

“We know that there are specific motels where people can go to,” she said of the Hollywood cleanup and effort to move people indoors. “In the best of all worlds, what I would like to see is us to be able to do this citywide. But we’re not at that capacity just now. It’s going to take us a minute to ramp up. I think this is day nine or day 10 of me being mayor.”

Bass was flanked by outreach workers and social services providers at Wednesday’s news conference, where she signed the executive order. Among other things, it directs city officials to compile a report by the end of March that will “create a unit acquisition strategy, including master leasing for both interim and permanent housing options.”

The first goal, she sets out in the document, is to “decrease the number and size of encampments across the city.”

Bass’ emergency declaration, which the City Council authorized, gives her a lot more flexibility to quickly commit city funds toward leasing motel and hotel rooms. City officials said Bass currently has about $20 million at her disposal that could be put toward leasing beds quickly.

More funds could be made available to her, but that would require more input from the council.

Last year, Adams Kellum’s organization coordinated the outreach and renting of hotel rooms along Ocean Front Walk in Venice, where a massive encampment had sprung up, frustrating local residents and business owners.

The city gave her organization about $5 million to do that work, and more than half of the funds went to renting motels for more than 200 people. Much of the rest went toward staff to supervise the outreach and operations of the hotels.

That operation was delayed in part because Adams Kellum’s team had to wait for the City Council to sign off on the money being spent, recalled former Councilmember Mike Bonin, who represented the area and helped organize this work.

“There was a really drawn-out process then,” Bonin said. “Karen has the opportunity to say ‘let’s get moving’ and people will move. It’s a big difference from the usual legislative process.”

Both Bonin and Adams Kellum said the success of that work in Venice hinged on having beds available for people to quickly move into.

In an interview, Adams Kellum, who is on Bass’ transition advisory team, said that of the 213 people moved off Ocean Front Walk, 109 have found permanent housing. She added that it’s much easier to get people paired with a housing subsidy and into permanent housing if they’re indoors already.

“She knows housing has to be a part of it,” Adams Kellum said of Bass and her team’s work. “I know she’s lining that up because she knows you can’t go into an encampment sincerely without [the motel bed] in hand.”

Back on Cahuenga, Ryan waited for her case manager to arrive with her driver’s license — a delivery that continued to be delayed. Some of Ryan’s friends planned to stay on the street — uninterested in the offers of a hotel room. She had also seen some people lose items they cared about during the cleanup Tuesday.

It was chaotic, she said, as sanitation workers struggled to separate what could be thrown out and what people wanted to save. For all the frustrations and stops and starts, an offer to go indoors was something she’d still jump at.

It could be the “first step to restart my life,” she said.