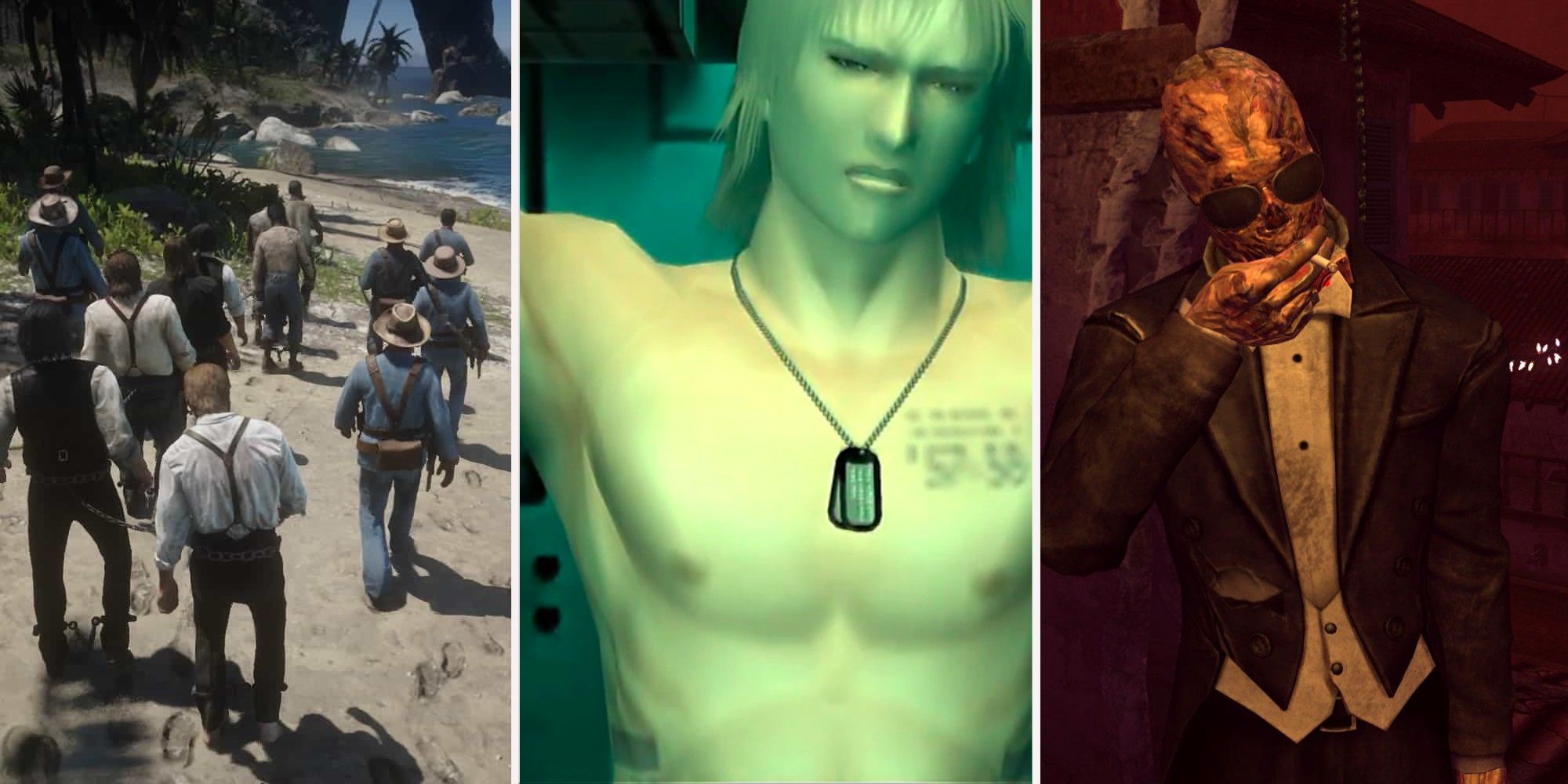 Fireballs, Power Pellets, and 4x Damage: video games love throwing power-ups at you. It’s a great way to empower you in a moment of need or reward you at the end of a challenging level, but sometimes developers want you to slow down.

These moments where you lose your powers and gear make you rethink combat situations and be grateful for all the cool stuff you had collected. So take your time, smell the roses, and wonder where all your guns have gone.

GTA 5 has a few levels where one of the three protagonists loses their weapons, including when Michael fakes his own death and must escape from the inside of a morgue without any guns. However, the best sequence like this leaves Michael with just a pistol on his return trip to North Jankton.

Lying low from the heat in San Andreas, Michael returns to where it all started in the hopes of burying the hatchet. He doesn’t come unarmed, but when the Triads arrive, you only have one handgun, instead of the countless rockets and grenades you left across the country. This sequence is great because it feels like it is out of a different, grittier, and more intense game. If anything, it’s basically the follow-up to Max Payne 3 we never got.

Many bemoaned the Guarma sequence of Red Dead Redemption 2 at launch, but years later, it feels like a vital part of that story. It’s the breaking point for Arthur, where after putting endless faith in Dutch and his plan, he finally realizes that Van der Linde is nothing but a snake oil salesman.

You wind up shipwrecked on an island, getting caught up in a civil war you don’t understand, without your friends, your camp, or any of your stuff. Yes, it’s a long sequence, but that just crystalizes what a struggle it is to get off Guarma. After this sequence, the fate of the gang is sealed.

Mario is no stranger to losing his powers at the worst possible time – FLUDD was taken away from him during Mario Sunshine several times, and there have been countless times his invincibility star has run out just in time for him to run into a goomba. While neither of those sorts of moments ever felt fun, Mario Odyssey manages to turn taking away the plumber’s power into a great level.

The Lost Kingdom sees the bird Klepto steal Cappy. Not only does this ruin Mario’s stylish outfit, but it also means that you can’t capture anything until you get it back. This sequence does a great job at showing just how good all the new movement abilities are by bringing things back to basics, but is also a fun puzzle level as you have to re-approach how you play the game.

Raiden really can’t catch a break, all he wants to do is be the world’s greatest ninja-cyborg-assassin, and instead, he keeps having his clothes stolen or having a moral crisis. Metal Gear Solid 2’s Naked Raiden sequence is iconic, surprising, and hilarious, but it’s a moment in Revengeance that carries a great deal more weight.

This sequence has everything you could want in a Metal Gear mission. The lead-up sees you playing as a shaken Raiden as he struggles to fight and dodge, and he becomes hard to control as he processes his guilt and anger. This all culminates with a monologuing boss, a discussion of the nature of memes, and Raiden finally letting Jack the Ripper out again.

Losing all your firearms in an FPS usually sucks. When everyone is firing guns at you, it’s only fair that you have a weapon to defend yourself. That’s why this segment of Half-Life 2 is so good – while Freeman does lose access to all of his guns, he’s left with a much-upgraded Gravity Gun to protect himself.

The Gravity Gun is already an incredible tool and it getting supercharged only makes dealing with the Combine even more of a breeze, as you send heavy objects hurtling towards your foes. You might not have most of your equipment, but the bad guys still never stood a chance.

Mass Effect’s Commander Shepard has to deal with a lot, as it feels like everyone in the galaxy is out to kill them – Collectors, Geth, Blood Pack, Eclipse, Blue Suns, and of course, The Reapers. So it’s nice that for Kasumi’s loyalty mission, you get to slow it down a bit and spend time taking in some fine art.

Who cares that the private collector is a violent murderer, your guns are smuggled in, and eventually, things break out into a huge firefight anyway. For a while there the hardest-working member of The Alliance just got to relax and appreciate some art.

Horror games love to take away the already feeble defensive capabilities they give you, and no series does it better than Resident Evil. The Ashley sections of Resident Evil 4 are iconic, while the Sherry parts of the remake of Resident Evil 2 are creepy – but the best section that leaves you vulnerable in a world full of mold and zombies is the Beneviento Manor in Resident Evil Village.

This section feels a lot like the Beginning Hour prologue for Resident Evil 7, in that all of Ethan’s equipment is stolen, and the game goes full hide-and-seek horror as you try to solve puzzles in the basement of the tragic Lady Beneviento. By far the weakest you’ll be in the most action-focused Resident Evil game since RE6, this sequence is scary, memorable, and goes off the rails fast.

The end of Titanfall 2 is brilliant. All hope is lost, the IMC and Apex mercenaries have The Fold Weapon, you have no guns, and BT has been destroyed. However, your AI’s final act was to give you their S.E.R.E. kit – this small container that leaves Jack Cooper with a knife, BT’s AI core, and a Smart Pistol.

Related: Every Titan In Titanfall 2, Ranked

With only these three things you’ll parkour your way to saving the Maitia, all while locking onto enemies with this auto-targeting pistol. This moment is great because while you basically have nothing left, you still feel immensely powerful

The entire Berlin level of Hitman 3 turns the whole series on its head. Where normally Agent 47 would methodically make his way into a secure location, smuggling weapons in with him to take out targets, this underground club in a warehouse on the outskirts of Berlin sees the hunter become the hunted.

In this level, 47 only has access to the items he can find after the van he is traveling in crashes. From here on out, there are ten other assassins trying to hunt him down for a change. This level changes the entire way you play one of these games, and it’s thrilling as a result.

Saying too much about the first DLC for Fallout: New Vegas would only spoil its countless surprises. So instead just know the setup: you wake up in town surrounding a Casino that was said to open the day the bombs dropped. The Courier and several other people have been kidnapped, stripped of everything, and you’ve had bombs strapped to your necks.

You must now try to get into the Casino, find its hidden treasure, and most importantly, get out alive.

1 Eventide Island – The Legend Of Zelda: Breath Of The Wild

No one forgets their first encounter with Eventide. One of the few Islands off the coast of Breath of the Wild’s main landmass, you’ll spend a fair deal of time trying to figure out how to get there. Whether you take a boat, manage to swim, or build a makeshift flying contraption, you’ll certainly feel like you deserve a reward for getting there.

However, something else wait for you. When you arrive, the game takes all your items and bonuses away, and challenges you to get off the island. It’s a challenging and memorable moment on its own, but It’s also maybe the most rewarding section of a great game.

Next: Small Details In Breath Of The Wild That Make The Game Even Better