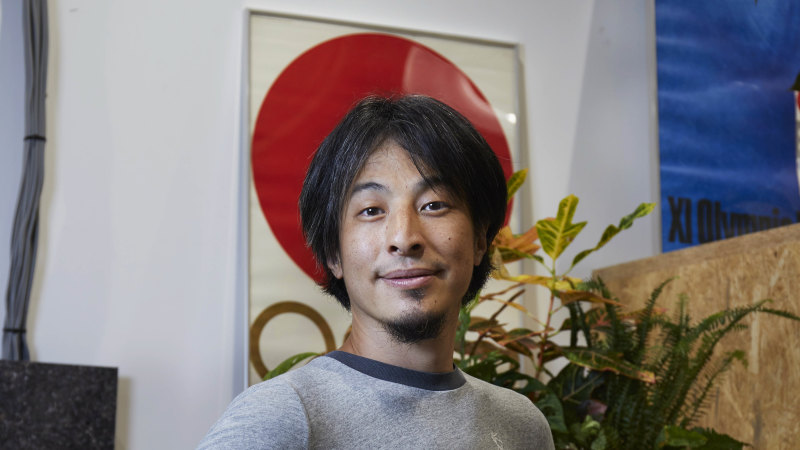 “I think about my current choices and about the future without reference to morals, then take action,” he said in a 2007 interview in Spa, a Japanese magazine. “Normal people have morals, so they’d probably say thinking like mine is strange.”

That outlook seems to have guided Nishimura in running both 4chan and its Japanese predecessor, 2chan. As described in court records, interviews and dozens of his books and other writings, Nishimura, 46, followed a playbook for 2chan that seems to have become a template for its successor: Do as little as possible to control the site and rebuff any demands to change it.

He constantly operated at the knife’s edge of the rules, and even as pressure from Japanese society and the courts mounted, he refused to budge, arguing that he was not doing anything illegal.

When interviewers over the years asked about his responsibility for the site, Nishimura — who, despite his prodigious output, relishes portraying himself as a slacker — repeatedly said that managing 2chan was “boring” or “too much trouble.” If people have a problem with its content, he added, they should ask parliament to change the law.

Pressed on the issue in 2001, he responded that he had “no feeling of responsibility” for the site’s content, adding that its most active users should make their own rules.

“I provide a space, but I tell people, ‘You all decide what you do inside it.’”

In 2015, when Nishimura bought 4chan, he did something he has rarely done since: He answered questions about his vision for the site.

It was already one of the internet’s most notorious corners. But if he could make just one change, he told users, it would be for more interesting things to happen there, “even bad things.”

His wish came true. Since Nishimura took over, users of 4chan have birthed the QAnon movement, spread conspiracies about COVID-19 vaccines and the 2020 election and helped radicalise mass shooters. A congressional committee investigating the January 6 riots at the Capitol demanded that Nishimura hand over information about individuals linked to the attack. And the man accused of attacking House Speaker Nancy Pelosi’s husband in October wrote that he was a frequent poster on the site.

With his websites, Nishimura — who declined to be interviewed for this article — has said he is merely filling a demand for outlets where people can exercise free speech. He has insisted that he has always followed the law and responded to requests for information from authorities about suspected crimes related to posts.

Nishimura got his start with 2chan, a sprawling, chaotic and — most important — anonymous message board he created on a lark in 1999 as a student at the University of Central Arkansas.

By May 2000, it had already become infamous, after a user posted a cryptic message about a city bus in southern Japan, then hijacked it, stabbing three people and killing one.

The episode transfixed Japan. New users flooded the site, and Nishimura soon found himself in the news, unapologetically explaining his hobby to a nation just coming to terms with the internet.

“We don’t live in a utopia,” he said in a 2002 interview with Japanese magazine Flash. “Something was bound to happen.”

More soon did. The site blossomed into a wellspring of freewheeling, oddball internet culture, becoming one of the few places in buttoned-up Japan where people could openly voice their opinions.

In 2004, 2chan went mainstream with the publication of “Train Man,” a collection of posts from the board that purportedly showed how users had helped a hapless nerd woo the woman of his dreams. The story became a bestselling book, a blockbuster movie and a popular TV show. It made 2chan the most heavily trafficked site in Japan.

While most users discussed hobbies or griped about work, others threatened murder, posted bomb threats and spawned reckless conspiracy theories. A flood of posts from far-right users denied Japan’s war crimes and contributed to a nationwide rise in anti-Korean hate.

As Nishimura profited handsomely from the site — earning as much as $US100,000 a month — he also became adept at dodging its costs. By his own account, he was sued more than 100 times over 2chan posts. He refused to pay at least $US1 million in court judgments, pointing to the lack of criminal penalties for doing so.

“If I would be put to death for not paying, I would. But nothing’s going to happen to me if I don’t pay, so I won’t,” he told reporters after a 2007 court hearing.

For Nishimura, dodging the lawsuits — like everything else related to 2chan — was “just a game,” said Eichiro Fukami, who worked closely with Nishimura on 2chan-related projects for years. Fukami successfully sued Nishimura for libel after Nishimura had accused him of embezzlement.

Nishimura, he said, spent countless hours thinking up ways to avoid laws and regulations. The servers used by 2chan were based in the United States, beyond the reach of Japanese law. At one point, Nishimura considered declaring the site a religious organisation to receive a tax exemption, Fukami said.

“He was always moving at the very edge of the rules,” he added.

As the reputational costs of 2chan grew, Nishimura sought to distance himself. In early 2009, he suddenly announced that he had sold the site and severed his connections. He wrote a book titled “The Reason I Threw Away 2chan.”

The story didn’t hold up for long. A court proceeding involving Nishimura revealed that police believed his sale of 2chan was a ruse to hide his ownership. In a subsequent, unrelated legal action, his lawyers confirmed that Nishimura had secretly continued running the site.

In 2013, Nishimura lost control of 2chan in a dispute with Jim Watkins, a longtime friend who later became the owner of 8chan, an even less regulated version of 4chan. With one blow, Nishimura had lost a crucial source of both income and influence.

About two years later, Nishimura bought 4chan from an American named Christopher Poole. The site had been the birthplace of early internet memes like Rickroll and LOLcats. But it had a darker side, spawning Gamergate — a harassment campaign that flooded women in the video game industry with death and rape threats — and the misogynistic incel culture.

By 2014, Poole was exhausted and eager to find a replacement. Nishimura was interested.

In his bestselling anti-productivity manifesto “One Per cent Effort,” Nishimura wrote that he had decided to buy 4chan because he wanted to move out of the ageing, shrinking Japanese market. Anonymous message boards, he said, were well known as places where “problems easily happen,” meaning that most companies were afraid to touch them.

While there was plenty of demand for the sites, there was little competition. “The site would make money even if I did nothing,” he wrote.

Today, the site’s operations are almost completely opaque. Unlike Poole, Nishimura has only rarely answered questions about 4chan. Its ownership is hidden behind a corporate veil, and it is managed by anonymous moderators bound to silence with nondisclosure agreements. (Nishimura, according to documents reviewed by The New York Times and people familiar with the situation, bought 4chan with funding from three Japanese partners for an undisclosed sum.)

”Since I’ve been running 4chan, we’ve never been taken to court,” he recently wrote on Twitter, without noting that, unlike Japan, US law protects web platforms against responsibility for users’ posts.

“Logically,” he added, “that means 4chan has been fulfilling its obligations, and there are no problems.”

This article originally appeared in The New York Times.