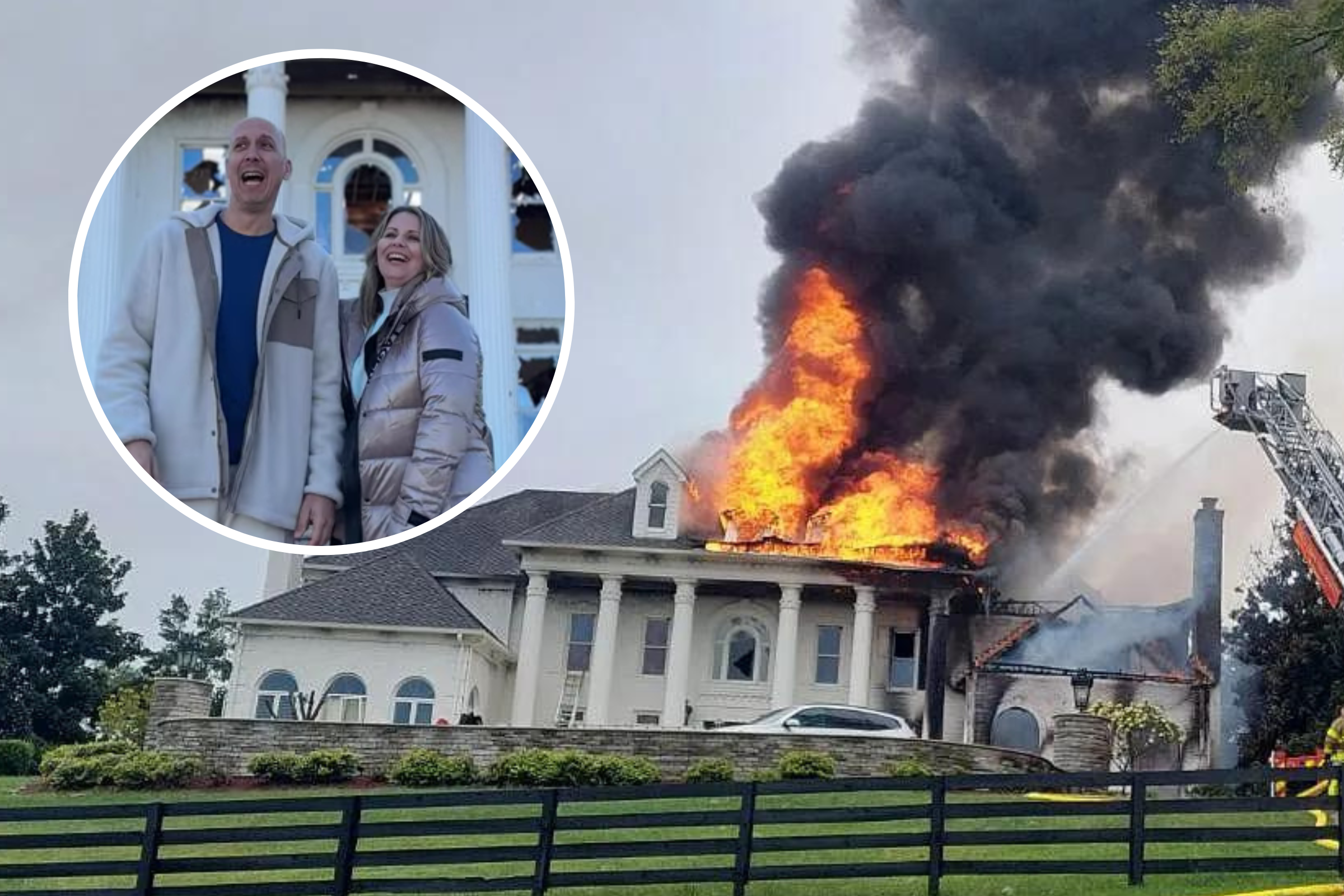 A house listing has secured a buyer after capturing viral attention for an unusual image showing the moment the home went up in flames.

The $1.5 million mansion in Franklin, Tennessee, was built in 1997 and recently renovated by owner and seller Danny Duvall. But just before the renovations were complete, tragedy struck.

“On September 10, 2022, about 2:30 p.m., my painters were finishing up painting our library. The painters were spraying lacquer paint in that room when a tiny spark from the paint sprayer ignited the fumes from the paint and the entire room, and home, quickly went up in flames,” Duvall told Newsweek.

“I took the photograph of our home as it stood burning out of control. As I stood in the street weeping, I watched as my life savings and two years of work perished before my eyes,” said the devastated owner.

The powerful photograph was taken just moments after the owners arrived at the scene, where the fire department worked to try and get the fire under control.

“This was no ordinary home,” said Duvall. “The home was filled with exquisite details from the moment you parked your car, and walked in the front door. Most of the home is a total loss but, there are still numerous, valuable assets that can be saved from the fire.”

Facing what he described as a “catastrophic loss,” Duvall decided that it was time to sell the home: “We decided to sell everything as is. I thought that maybe I should include the same photo that we were so emotionally attached to,” he explained. “We wanted to convey in the listing a sense of what we had been through, and we wanted to be transparent to all interested parties.”

The addition of the photograph sparked overwhelming interest in the property from people throughout the U.S. and the rest of the world.

Popular Twitter account @Zillowgonewild posted a picture of the listing on January 20, where it has been viewed over 1.1 million times.

After gaining viral attention, the brave move to include the full extent of the damage in the listing seems to have paid off as Duvall found a buyer.

“By Mid-Afternoon the Contracts Were Signed”

Entrepreneur Mike Thakur revealed on his YouTube channel on January 23 that he had purchased the property at 5603 Winslow Road.

“I wanted something I could fix up and make it the way I wanted it, the way my wife wanted it,” Thakur told his viewers on YouTube. “Then we came across this bad boy over here, and the roof was literally on fire.”

Captivated after seeing the picture of the house on fire online, Thakur and his wife headed to the location to view the interior and made the decision to purchase the incredible yet damaged home.

“We arrived at the house for the first time on Friday morning at 11:30 a.m. By around 1 p.m. we’d agreed a deal and shook hands on it, any by mid afternoon the contracts were signed,” Thakur told Newsweek.

Alongside the damaged mansion, the listing includes almost five acres of property and a guest home that wasn’t damaged during the fire.

With a big journey ahead, Thakur explained that he and his family fell in love with the home instantly, despite the fire damage. “We kind of wanted something we could make our own a little more, but never dreamed it would be something like this,” he explained. “When we arrived at the house and started to walk around it, we all fell in love. We have a family meeting with our 3 kids on the driveway while the realtors waited and all agreed it could be amazing to buy it and restore it right then and there.”

The Thakur family plan to restore the exterior first, removing any unusable wood and material and add a new roof to get the house weather-proof. From there, they will work on the interior layout: “That’s when we’ll get to have fun reusing some of the items we can salvage but also modernizing the design inside to really make it our home,” said Thakur.

As part of the journey, they plan to share every step on their YouTube channel in a series called Restoring the Manor, sharing weekly vlogs and also posting updates on Instagram using the handle @realmikethakur.