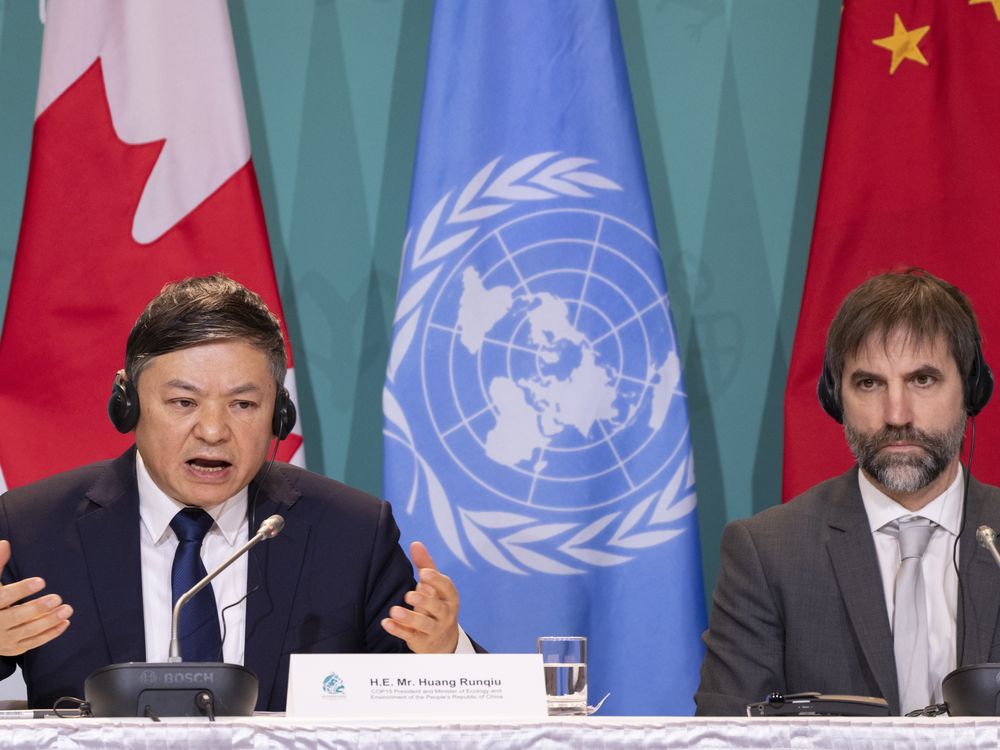 OTTAWA — The international biodiversity framework reached Monday in Montreal was possible because Canada and China were able to set aside their diplomatic differences to co-lead the negotiations, Environment Minister Steven Guilbeault said as the summit came to a close.

And the agreement will bind the two countries together, because it is named after the cities in China and Canada where it was negotiated. Though China officially hosted the COP15 event, the final negotiations were ultimately moved from Kunming to Montreal because of China’s COVID-19 policies.

The Kunming-Montreal global biodiversity agreement is being lauded by governments and nature experts as a historic deal meant to turn the tide on the devastating impacts humanity is having on wildlife and critical ecosystems.

The 196 parties to the agreement are now aiming to set aside 30 per cent of their land and marine territories as conservation areas by 2030, reduce the use of pesticides and harmful plastics, increase urban green spaces, ensure sustainable use of wild species and reduce overconsumption and food waste.

“The Kunming-Montreal global biodiversity framework is a major win for our planet and for all of humanity.”

Canada was asked to host the talks in Montreal because it’s the city that houses the UN biodiversity secretariat offices. While China remained the official host, Canada took on logistics and had a bigger influence over the ambition of the talks.

Before COP15 began, there were concerns about the joint hosting efforts of China and Canada given the ongoing tensions between their two governments.

The relationship took a nosedive in 2018 after Canada arrested a Chinese tech executive on behalf of the United States and China swiftly detained two Canadians in apparent retaliation. While more than a year has passed since all three were released, tensions haven’t eased much.

In the month leading into COP15, new allegations were made in Canada about Chinese government interference in Canadian elections, Canada enacted a new policy to force Chinese state-owned companies out of their ownership stakes in Canadian critical mineral operations and Canada issued a new Indo-Pacific foreign-relations strategy designed to counterbalance China’s influence in the region.

But during the last two weeks, Guilbeault and China’s environment minister, Huang Runqiu, shared a stage multiple times, expressed similar positions on the negotiations and thanked each other often and profusely for their support.

Asked about that level of co-operation Tuesday, the Chinese minister said he and Guilbeault had spoken at least weekly since the Montreal venue was selected in June, and often more than that.

“Canada has been really helpful,” Huang said through a translator.

Minutes after Huang lowered his gavel to declare the deal done overnight on Monday, Guilbeault congratulated him and thanked him for his solidarity.

“What we have accomplished, in a way, is a reflection of the journey that our two countries have gone through over the (last) months in deciding to set aside our differences, and to choose to work together on the things that unite us,” he said.

“I think this is reflective of what we have just adopted tonight, under your leadership, and I, on behalf of Canada and Canadians, I want to thank you for that.”

Guilbeault’s words were met with loud applause from the rest of the delegates in the final plenary.

China will remain in the president’s chair for the biodiversity convention over the next two years, and Huang said he will use that time to keep pushing for implementation.

The framework includes a call for every party to develop or revise a national biodiversity strategy and action plan to align with COP15’s targets, and regularly review their progress. It also allows for voluntary peer reviews, where one country takes a look at how another is holding up their end of the bargain.

Developed countries also need to ramp up their financing for developing nations to help them meet the conservation targets, and a new dedicated biodiversity fund must be established within the existing Global Environment Fund.

Guilbeault said that in 2020, developed nations put about US$16 billion on the table toward biodiversity financing. He said, that will have to rise to US$20 billion by 2025 and to US$30 billion by 2030.