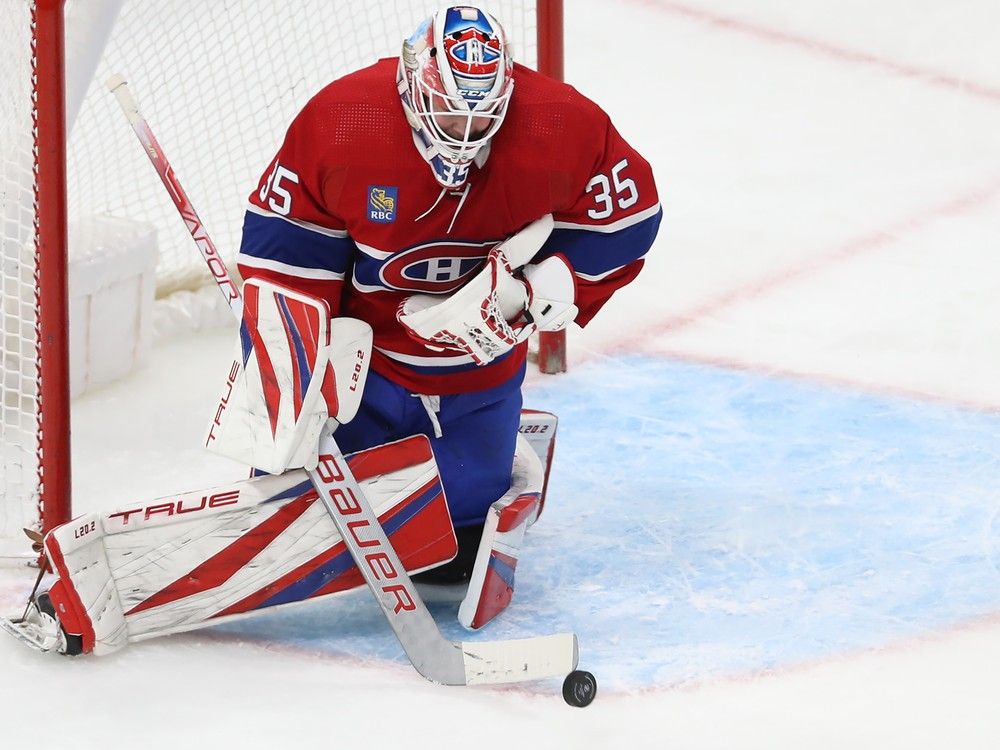 Jake Allen said he’s happy to see Sam Montembeault’s recent success, even if it means less ice time for him.

“Sam’s doing his thing, I’m doing my thing,” Allen said Wednesday after being cleared for action following eight games missed with an upper-body injury. “Whenever I get in net, I’m not sure when it is yet, I’m going to be me. If Sam keeps rolling and keeps playing, it’s better for this team. That’s the way I approach it, try to get better every game.”

Montembeault is expected to make a ninth consecutive start Thursday when the Detroit Red Wings visit the Bell Centre (7 p.m., TSN2, RDS, TSN-690 Radio, 98.5 FM), but Allen said that he would like to make at least one start in the next three games before the Canadiens take a 10-day break without games and with only two practices before the traditional Super Bowl weekend matinees on Feb. 11 and 12.

“I’m super happy for him,” Allen said. “He’s probably played the best in the league the last couple of weeks. He’s been patient, he’s been confident. I’m glad that he’s getting a chance.”

Allen said he was impressed the first time he saw Montembeault last season.

“He’s an athlete and not just a goalie who stands there and blocks pucks; he’s a lot more than that,” Allen said. “Nobody talks about it, but one of the underrated parts of his game is his puck-handling. No one talks about it, but I think nine out of 10 times he handles the puck he makes the right play.”

“He’s been way more patient on his feet,” Allen said. “I think patience is something that’s always important in today’s game, the way it’s so fast and how skilled the offensive players are on all 32 clubs. Patience is clutch.”

The 32-year-old Allen has two years remaining on his contract after this season, but he said he’s realistic and knows that Montembeault and Cayden Primeau are ticketed to be the future for the rebuilding franchise.

“I think Sam has put himself in that group that wants to take this team to the next level and where the Montreal Canadiens want to go,” Allen said. “I understand the situation. I’m a realist that I’m not going to be the guy for the future, but I want to see this team have success whether it’s Sam, Cole or Suzy. To be able to see Sam play this way and being a Quebecer it’s even bigger, it’s impressive. I want him to keep getting better. … There’s a high ceiling for him.”

It has taken years for Montembeault to reach this point in his career and the 23-year-old Primeau is a work in progress, which raises the question: Why does it take so long for goaltenders to develop?

“There are very few Carey Prices or Vasilevskiys, guys who have the God-given talent a lot of us don’t have unfortunately, although we wish we did,” Allen said. “A lot of it is experience, understanding what works for you. What works for Sam might not work for me or vice versa. It takes a long rime to understand the game. There are also transitions to the way the game is played over the past five, six years. Some goalies can adapt to it and some don’t.”

And it’s opportunity,” Allen added. “Sam got that opportunity when we picked him up last year. If we didn’t pick him up, who knows what the situation would be for him? This is the chance to prove he’s the goaltender of the future and he’s doing a helluva job.”