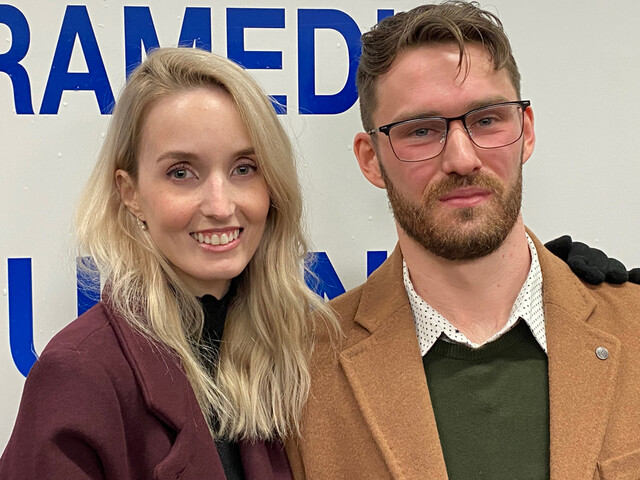 His actions that night helped save Strauss’ life, an act for which he was honoured for on the one-year anniversary with the BC Emergency Health Services Vital Link Award.

He was lauded a hero.

“Just happy to do what I could do to save my friends life. I’ve had training on it so it didn’t feel out of the ordinary to do that.

“I’m just happy to make sure she is still around.”

Tucker, Strauss and friends had been out that evening for dinner and drinks and, according to Tucker, Strauss collapsed minutes after the group got back to her home.

He immediately called 911 and was connected with a BCEHS dispatcher who was able to walk him through it.

“The dispatcher was super helpful. She walked me through it.

“She told me, ‘Stayin Alive’, the Bee Gees song that is still so apparent. Super thankful for that.”

Paramedics arrived about 10 minutes after the initial call and continued CPR and were able to get a pulse after one shock with an automated external defibrillator AED.

Strauss says she doesn’t remember that day but has gradually learned the events of the evening and how they unfolded.

“I think it’s a lot more special that someone who I had contact with regularly (was able to save my life),” she said.

“It was nice to know that in such a vulnerable situation it wasn’t some stranger, it was someone who knew me.”

“I can never thank you enough, and all of you for saving my baby’s life,” said Loralee Strauss, Tasia’s mother at the conclusion of the ceremony.

Lana Wilde, one of the four paramedics who responded to the call, says everyone should take the time to learn CPR.

“If more people were brave and were willing to step up like Charlie, deaths or serious long-term affects caused by cardiac arrest could drop significantly,” said Wilde.

“I want everyone to take a day and get CPR training. It can save your mom’s life, your dad’s life, your lover’s life, so it’s very important.”