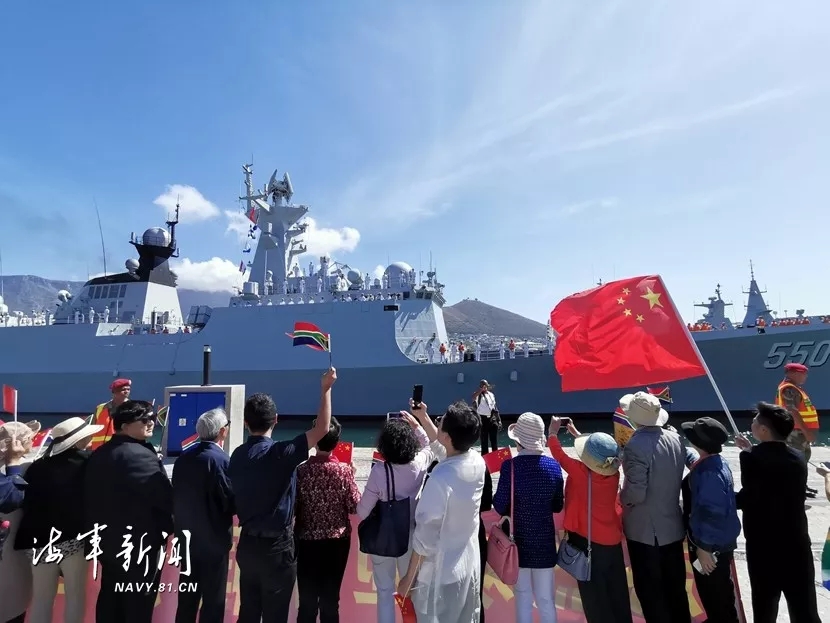 China and Russia have set out to bring their growing defense ties to Africa, in which both powers have increasingly invested their economic, political and military capital.

China, Russia and South Africa announced last week their intention to hold 10-day trilateral naval exercises off the southern coast of Africa next month, a plan that has raised concerns among critics of Moscow’s ongoing war in Ukraine.

Following talks with his South African counterpart in Pretoria, Russian Foreign Minister Sergey Lavrov defended the drills as a natural development in which “three sovereign countries, without violating any norms of international law, conduct exercises.” He suggested that only “probably our American colleagues” would take issue because “they believe that only they can conduct exercises around the world.”

The top Russian diplomat said that Moscow was “in favor of each country having its own rights in the international system, as stipulated by the U.N. Charter,” and “it is on such grounds—not dictate, but equality, not the imposition of decisions, but consensus, the search for a balance of interests—that we develop our cooperation, including within the BRICS framework.”

BRICS is a multinational grouping including emerging economies Brazil, Russia, India, China and South Africa that have increasingly sought areas of cooperation outside the Western framework of international relations.

Following Lavrov’s remarks, South African Foreign Minister Naledi Pandor took a similar position on the upcoming joint exercises, which she called “just a natural set of exercises that occurs between countries that have such relationships.”

She referred to earlier comments in which she asserted that “Africans need to resist” the “impulse of wanting to direct the double standard for of international conduct toward us, that, ‘What I do, it’s okay for me, but you cannot do it because you are a developing country,’ or, ‘You are Africa.'”

“That is an abuse of international practice,” Pandor said. “All countries conduct military exercises with friends worldwide.”

The three countries have previously held joint exercises at sea, including in November 2019, but the latest training was set to take place at a particularly precarious time in geopolitical tensions.

The Biden administration has launched a new effort to revitalize ties with Africa, especially through last month’s U.S.-Africa Leaders Summit. U.S. officials used the opportunity to not only pledge greater assistance and investment in Africa, but also to warn the leaders not only against expanding economic ties with China, but also about maintaining trade with Russia amid Western sanctions over the Ukraine conflict.

But Beijing and Moscow have continued to develop their presence on the continent, where they have found a number of willing partners, including South Africa.

In line with a tradition that has extended over more than 30 years, China’s new foreign minister and former ambassador to the U.S. Qin Gang visited Africa for his first trip of the year, touring Ethiopia, Gabon, Angola, Benin and Egypt, and holding a meeting at the African Union Headquarters earlier this month.

He proclaimed there that “the profound traditional friendship between China and Africa, rooted in mutual support between both sides in the fight for national liberation and originating from mutual help in the course of pursuing development, is a friendly relationship of cooperation featuring sincerity, real results, affinity and good faith based on mutual respect, equality, mutual benefit and win-win results.”

Both Beijing and Moscow have a long history of supporting African anti-colonial movements, many of which went on to form newly independent countries during the Cold War. The modern staying power of these relations has been greeted with dismay by the Western powers, some of which colonized the continent and continue to wield influence there.

But in his remarks earlier this month, Qin said that “no country or individual has the power to force African countries to pick sides,” arguing that “Africa should be a stage for international cooperation, not an arena for major-force rivalry.”

For China and Russia, two countries already expanding their bilateral military ties, the joint drill with South Africa represented an opportunity not only to boost defense engagement in Africa but also among BRICS, which has opened up for expansion. A number of countries, including Algeria and Egypt in North Africa, have expressed interest in joining.

The drill itself, called “Exercise Mosi,” will take place in the Durban and Richards Bay areas of South Africa’s Kwa-Zulu Natal province between February 17 and 27, according to the South African National Defense Force, which referred to the event in a statement.as a “means to strengthen the already flourishing relations between South Africa, Russia and China.”

China, where President Xi Jinping has vowed to establish world-class status for the People’s Liberation Army by the middle of this century, established its first and only official overseas base in the East African country of Djibouti in 2017. Beijing also works with African governments on defense matters through the China-Africa Defense and Security Forum.

Every country on the continent, with the exception of the tiny kingdom of Eswatini, has joined Xi’s Belt and Road Initiative, in which China promises billions of dollars in infrastructure investment to participants.

Russia has forged security agreements and deepened influence with a number of African countries, including Algeria, Burkina Faso, Central African Republic, Egypt, Eritrea, Ethiopia, Madagascar, Mali, Mozambique, South Africa and Sudan, where the Russian Defense Ministry has been in talks over establishing a base of its own. Russia’s Wagner private military group is also active in several African countries, seeking to address lingering security issues at the request of national governments as Western influence declines.

From 2017 through 2021, Russia also held a substantial lead on weapons exports to Africa, accounting for some 44 percent of major arms transfers to Africa, more than the U.S., China and France combined, according to the Stockholm International Peace Research Institute.

But while France and other European participants of counterterrorism operations in the Sahel region have begun to withdraw their forces amid political disputes with host countries, the U.S. still maintained the largest foreign military presence in Africa by far, with a presence in at least 29 locations across 15 African nations as of 2020.

He said that “there are a lot of countries that maintain a security or defense relationship with Russia,” many of which “have in the past purchased Russian-built or Soviet-era equipment, so it stands to reason that they may maintain some type of relationship.”

“From a security cooperation standpoint, certainly from the U.S. perspective, I think that the types of security assistance the United States provides, to include capabilities, are much more dependable and also maintained,” Ryder said.

He emphasized that the U.S. remains open to discussions with other nations about the purchase of those weapons systems.

“And something that we continue to discuss with various partners and allies around the world [is] should they choose to purchase those kinds of systems, we’re certainly all ears,” Ryder said.