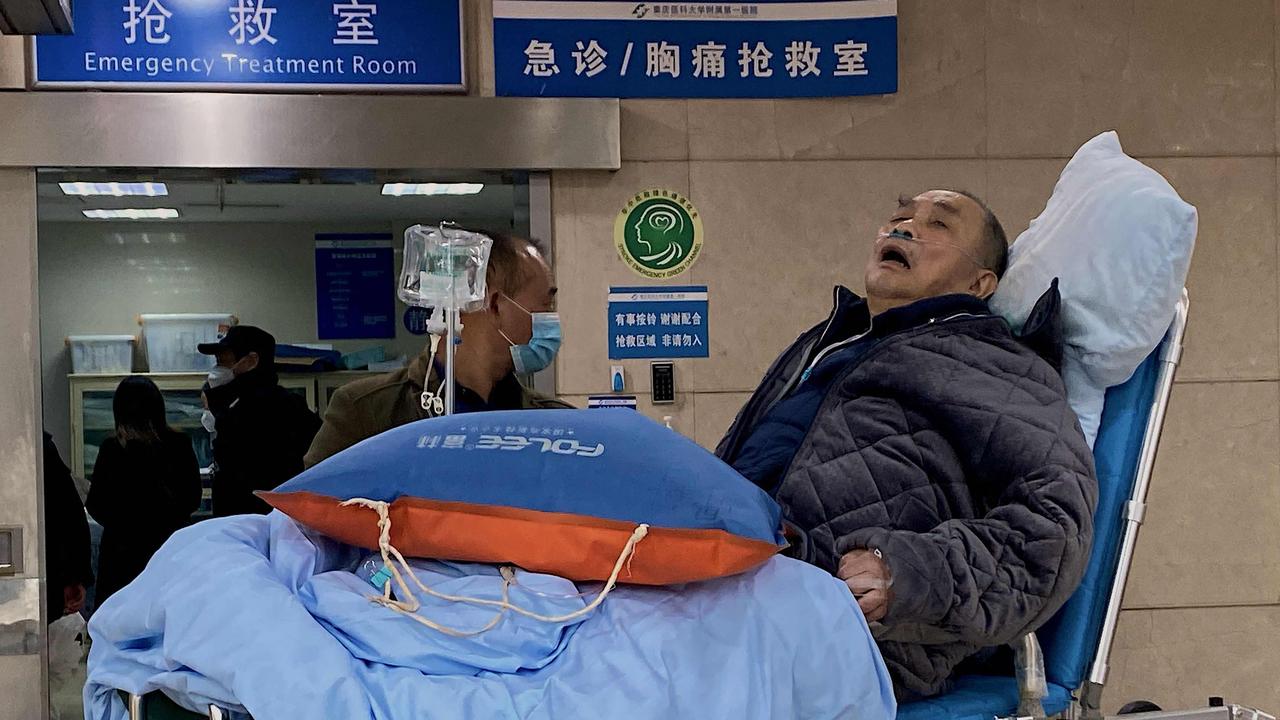 China is floundering under a tidal wave of Covid cases, and is likely seeing one million infections and 5000 deaths every day as it grapples with what will likely be the largest outbreak the world has ever seen – all as the official tally screams of a cover up.

The situation is only set to get worse as the virus sweeps the country of 1.4 billion people. The current wave may see the case rate rise to 3.7 million a day in January, according to London-based predictive health researcher Airfinity.

There will likely be another surge in infections that will push the daily total to 4.2 million in March, they estimated.

Suspicions of a cover up

Officially, China reported just shy of 3000 new cases on Wednesday, and claimed there had been fewer than 10 Covid deaths since the beginning of December.

It contrasts a growing number of reports of overwhelmed hospitals and crematoriums pushed beyond their capacity. Horrifying footage has shown bodies “piling up” outside morgues and in hospital hallways as the medical system buckles.

One Shanghai hospital has told its staff to prepare for a “tragic battle” with COVID-19, as it expects half of the city’s 25 million people to be infected by the end of next week.

The Shanghai Deji Hospital, posting to WeChat late on Wednesday, estimated there were 5.43 million cases in the city and that 12.5 million in China’s main commercial hub would be infected by the end of the year.

Since walking away from Covid-zero, China has largely abandoned its network of mass testing booths and scrapped efforts to include every infection in its daily tally, asking residents to rely on rapid antigen tests with no obligation to report the results.

Only those who die directly of a respiratory failure are now considered to have died from Covid. Previously, as is the case across much of the world, people who died of an illness with infected with the virus were also counted as a Covid death.

“The official data is unlikely to be a true reflection of the outbreak being experienced across the country,” said Louise Blair, Airfinity’s head of vaccines and epidemiology.

Spread of a new variant

Meanwhile, there are fears a dangerous subvariant could form in the rapid-fire transmission among China’s huge population.

Daniel Lucey, a fellow at the Infectious Diseases Society of America and professor at Dartmouth University’s Geisel School of Medicine, previously told Bloomberg there would “certainly be more omicron subvariants developing in China in the coming days, weeks and months”.

The World Health Organisation also rang the alarm bells, with Director-General Tedros Adhanom Ghebreyesus telling reporters on Wednesday that more information was needed as a matter of urgency.

China’s foreign ministry spokesperson, on the other hand, claimed China had always released Covid-19 information in a “transparent” manner.

The outbreak is particularly worrying in a country with low vaccination rates among the elderly.

China has relied largely on its own vaccines, which have been proven less effective at preventing serious illness and deaths from Covid than the mRNA jabs used across the world.

Meanwhile, the sweeping illness has “collapsed” China’s logistics and transportation sector. Viral footage taken in China shows huge piles of boxes lying in the street and packed into overflowing vehicles, indicating a serious backlog of deliveries.

It adds to an already worrying shortage of pain and fever medications, and sparked concerns of a global shortage given China’s status as a global manufacturing hub.