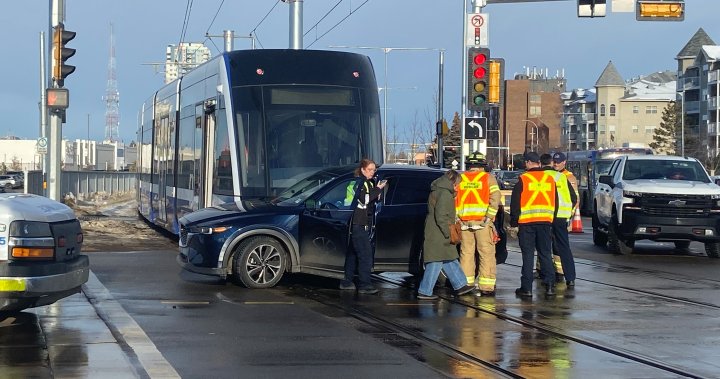 As Edmontonians eagerly await the official launch of the Valley Line LRT, some drivers are colliding with the new design.

This past weekend during testing, a Valley Line train collided with a car at 82 Avenue and 83 Street.

Police said the train and car were both headed south on 83 Street, when the car turned right on a red light in front of the train.

As traffic signage indicates, right turns are not allowed on reds at some intersections.

The city said drivers will have to get used to not having crossing gates and audible bells in order to stay safe. The new low-floor design is different from the city’s other LRT system and proving to be a tough adjustment for some.

Cooper isn’t surprised there’s growing pains, but said this is the direction trains are going around the world.

“It actually follows a lot of industry standards: you go to Waterloo, Ont., you go to Toronto, you go to Portland, you go to Minneapolis — these are LRT systems that don’t have crossing gates, they’re pretty open by design,” Cooper said.

“The design of this train line is a much slower speed, it has more frequent stations. You will not have the travel speed that you’ll see in the Capital/Metro Line.”

The 13-kilometre Valley Line southeast from Mill Woods to downtown is different from the current high-floor LRT system that Edmonton operates.


In residential and commercial areas, embedded tracks are integrated to the established design and traffic flow of the area.

“I think there’s a frustration among Edmontonians about the Valley Line LRT at times, but I think when it opens — people will love it,” Cooper said.

“It’s very different, it’s going to open up the city in very different ways. It’s much less intrusive than we seen some of the some other LRT projects.”

The line is being built by public-private partnership contractor TransEd, a consortium is made up of four companies: engineering firm Bechtel, construction company EllisDon, train builder Alstom (which acquired former builder Bombardier in 2021) and Fengate Asset Management.

TransEd is responsible for designing, constructing, operating and maintaining the line for the next 30 years.

The City of Edmonton and TransEd reiterated their message and slogan on Monday, around the new train and safety.

“If you see tracks, expect a train,” Dallas Lindskoog, a spokesperson for TransEd, wrote in an email to Global News.

The campaign includes education on the no right on red traffic signals.

“We have had one other collision in early Nov. 2022 where a motorist similarly turned right against a no-right on red signal and sign and sideswiped a train at low speed. This collision occurred on 66 Street northbound, as the vehicle was attempting to turn right and go east onto the Whitemud Drive on-ramp,” Lindskoog said.

Mayor Amarjeet Sohi said there’s no plans to change anything about the design and safety around the train, everyone will just need to adjust to it.

“It was unfortunate the collision that happened last week, but this is also part of the awareness that TransEd has been engaging Edmontonians on,” Sohi, said.

“It will require some adjusting, absolutely but I am hopeful that there will be enough education and awareness as part of the testing.”

The train vs. vehicle incidents are covered by insurance, typically the at-fault insured, according to TransEd. Taxpayers are not on the hook for the cost of repairs to the trains.

The opening of the Valley Line has been delayed several times and is two years behind schedule.

It was most recently expected to open summer of 2022 — but then engineers discovered cracks in several piers and different elevated sections of the track, delaying the project indefinitely.

TransEd said the cracks were caused by insufficient steel reinforcement inside the rebar of the piers.


The next step towards an opening is resuming the testing process and having the $1.8-billion project certified by third-party safety inspectors.

There is no confirmed timeline for when the line will be open to passengers.

More cracks on concrete LRT beam in Edmonton are not a structural concern: TransEd