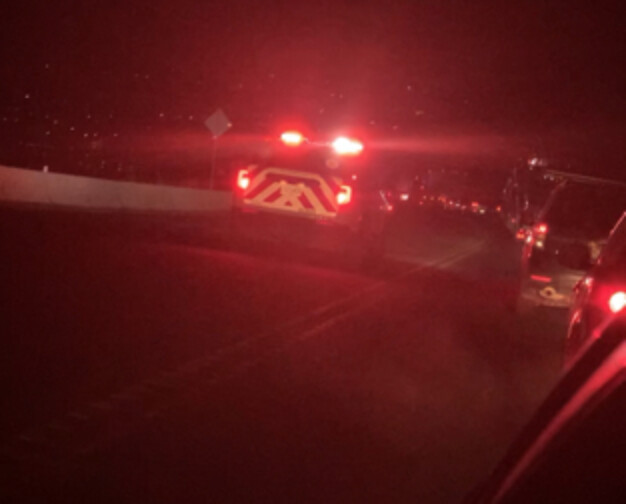 Southbound traffic was at a standstill and several emergency vehicles could be seen arriving at the scene of the crash.

A driver who used the detour route along Trepanier Bench Road is cautioning other motorists to take care.

She says it’s getting icy on the detour route. She says some stretches are so narrow that other vehicles are slowing down and pulling over to allow tractor-trailers to get by.

DriveBC confirms that Highway 97 is closed north of Peachland on Drought Hill due to a vehicle incident.

?#BCHwy97 – Closed in both directions due to a vehicle incident in #PeachlandBC, south of Drought Hill.

So far, there is no estimated time for reopening the road.

Another motorist said police are now turning drivers around. She says they told her the highway would be closed for hours.

Traffic was at a standstill Wednesday evening on Highway 97 near Peachland.

One person posted on the Penticton Facebook group to say that a passenger vehicle had collided with a tractor-trailer hauling automobiles just north of Peachland. She said it happened around 7 p.m. near the turnoff to Seclusion Bay Resort.

Another caller said she was going southbound, but traffic was stopped. She could see the lights from several emergency vehicles in the distance.

Expect major delays in the area .

The flashing lights of emergency vehicles could be seen in the distance by southbound drivers on Highway 97.