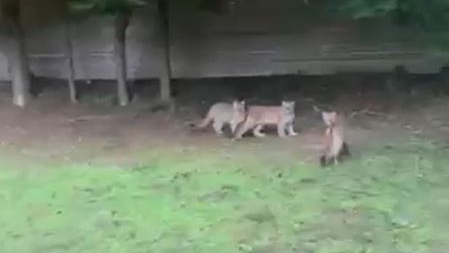 Mounties are warning the public after three cougars were spotted in the backyard of a home in Colwood, B.C.


The West Shore RCMP say they received a call from a resident in the 580-block of Latoria Road, near Veterans Memorial Parkway, at 8:20 a.m. Monday.


The man told police he was safe in his home but three cougars were in his backyard.


The cougars eventually left the man’s yard but a West Shore RCMP officer who was conducting patrols in the area spotted a cougar crossing the street and heading into Havenwood Park a short time later.


“The officer advised the cougar appeared to be younger and not quite full grown,” Cpl. Nancy Saggar, spokesperson for the West Shore RCMP, said in a release Monday.


Video provided to CTV News by a Latoria Road homeowner shows three cougars in his backyard Monday. The cats appear startled by the resident and scatter in different directions a few seconds into the video.


Conservation officers have been notified of the confirmed sightings, police said.


In an email to CTV News, another Colwood resident said a cougar came onto her ground-level patio and killed her son’s cat as it sat on their hot tub on Thursday.


Debbie Dennis, who lives near Latoria Creek Park, said her son heard a loud thump and then a screech around 6:30 p.m. He opened the curtains and saw the cougar’s tail as it fled, dropping the housecat next to the hot tub.


“This is becoming a real issue that needs to be taken seriously,” Dennis said.