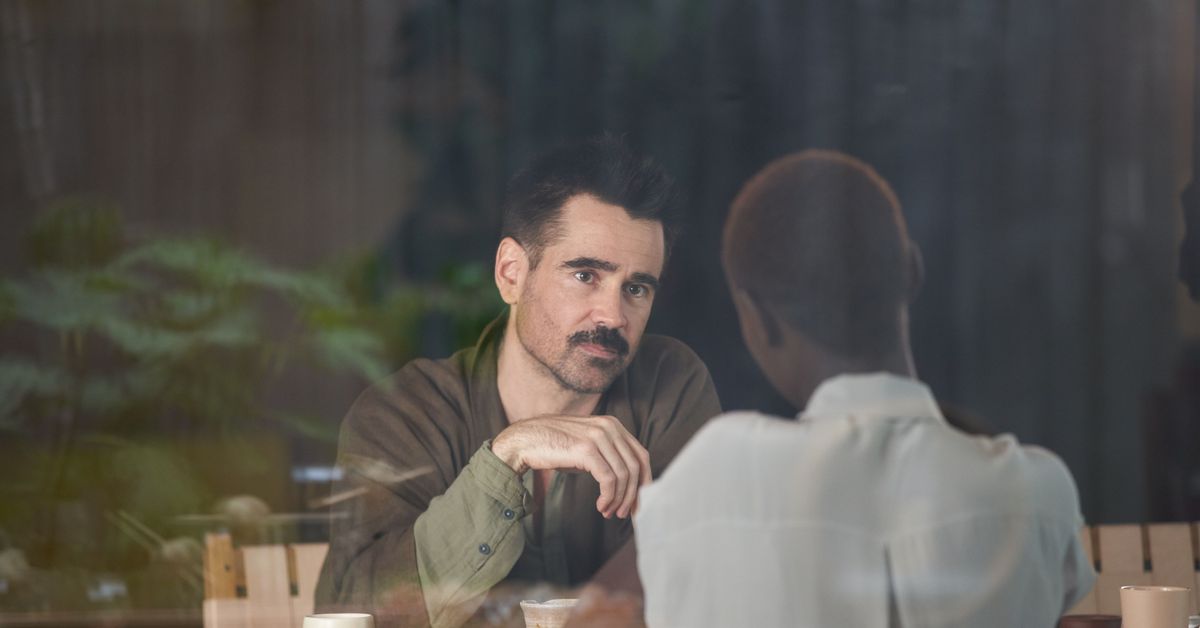 After Yang is probably the coziest science fiction movie this year. Directed by Kogonada, the film takes place at some point in the indeterminate future following an unspecified calamity and follows a young family who struggles through the loss of their android (the titular Yang, played by Justin H. Min), who serves as both a caregiver and a sibling for an adopted daughter.

The movie touches on all kinds of subjects, from transracial adoption to what it means to be human, but much of its worldbuilding comes from, well, the world. Few specific details are given about the time or place in which the movie is set or the events that led to the almost postapocalyptic world the characters dwell in. That means that the visual design did a lot of heavy lifting in terms of storytelling.

Schaller says she was attracted to the project initially when, after reading the script, she found herself able to visualize the world that After Yang takes place in. That decision was then solidified after she met with the director. “Kogonada is a real aesthete and cares a lot about design and the storytelling that goes on in space,” Schaller explains. “I actually came on to the project really early. I had a long preproduction period where I could really spend time thinking about the movie, talking about it with him, and designing it. I did a lot of concept work before we did the official prep. So I would say that a lot of the movie looks how I imagined it because I had so much time to think about it.”

And that vision is quite different from most science fiction. Schaller, who has a background in immersive theater, says she even avoided watching futuristic movies to keep from being influenced. After Yang’s world is one overwhelmed with plant life, and the homes have an almost hygge vibe to them, full of muted lights and natural materials. Even the way people dress looks comfortable. It’s a stark difference from the often harsh and sterile view of the future found in a lot of sci-fi.

“We wanted that part of the storytelling to be felt, rather than very obviously stated.”

But it’s also more than just a purely aesthetic choice. “I would describe it as grounded futurism,” Schaller says. “It was really important for Kogonada for the backdrop to feel as if it was a postapocalyptic period. Humanity has rebuilt itself after a calamity, so it’s a very green world. It was also really important for him for the movie to feel borderless and global.”

That presents itself in lots of different ways throughout the film. The self-driving car that the Fleming family rides in, for example, is filled with plants because they serve as the fuel source, while their home is dominated by a huge tree in the courtyard. The tea shop run by Colin Farrell’s character has bare stone walls, as if it was carved out of a mountain, and in one scene, you can see huge vertical farms in the background. Few of the specifics of the world are spelled out; rather, they’re things viewers are meant to infer while watching.

“The idea is that we’re living in a postapocalyptic period. Humanity has had to undergo some kind of major change, and they realize that we need to live with nature and not against it,” Schaller says. “There’s a symbiosis between humans and nature. Everything is engineered to work with nature.” She adds that “we wanted that part of the storytelling to be felt, rather than very obviously stated.”

The same goes for the location. There are some hints that After Yang is set in the US, but it’s also a movie about a couple, played by Irish and English actors (Farrell and Jodie Turner-Smith) who adopt a Chinese daughter (Malea Emma Tjandrawidjaja) in the wake of some kind of catastrophe. It’s a world that Schaller describes as “global,” and that’s shown through the mash-up of cultural aesthetics but also in the smaller details, like a carton of milk with information written in multiple languages. “It’s not really a placeless world, but it’s a world without borders that’s maybe freer and more accepting or more comfortable with itself,” she explains.

(Among the many creatives who worked on the film were concept artist Oliver Zeller, who helped design the car, and Matthew Vidalis, who, among other things, created all of the packaging featured.)

All of these details help create a richly defined backdrop for a story that is, at its core, about a family struggling through change. And they’re especially important in a film like After Yang, which is filled with slow, lingering shots that really let you soak in the details, making it easier to pick out small things you might’ve otherwise missed. “Kogonada as a filmmaker is very conscious of space and the quiet storytelling that takes place between the lines,” Schaller says. “These are small details that wouldn’t matter if you’re not really looking. But for Kogonada, it really did matter.”

The contrast between After Yang and other visions of a postapocalyptic future can be seen in another project Schaller worked on, last year’s TV adaptation of Y: the Last Man, which had a much more typical, and bleak, outlook as expressed through its world design. Schaller felt this difference acutely. As part of her research process, she uses Pinterest to create mood boards full of images for whatever she happens to be working on. “I remember finishing After Yang and thinking ‘my Pinterest is so beautiful,’” she says. “And then I started researching Y: the Last Man and it was like ‘goodbye.’”