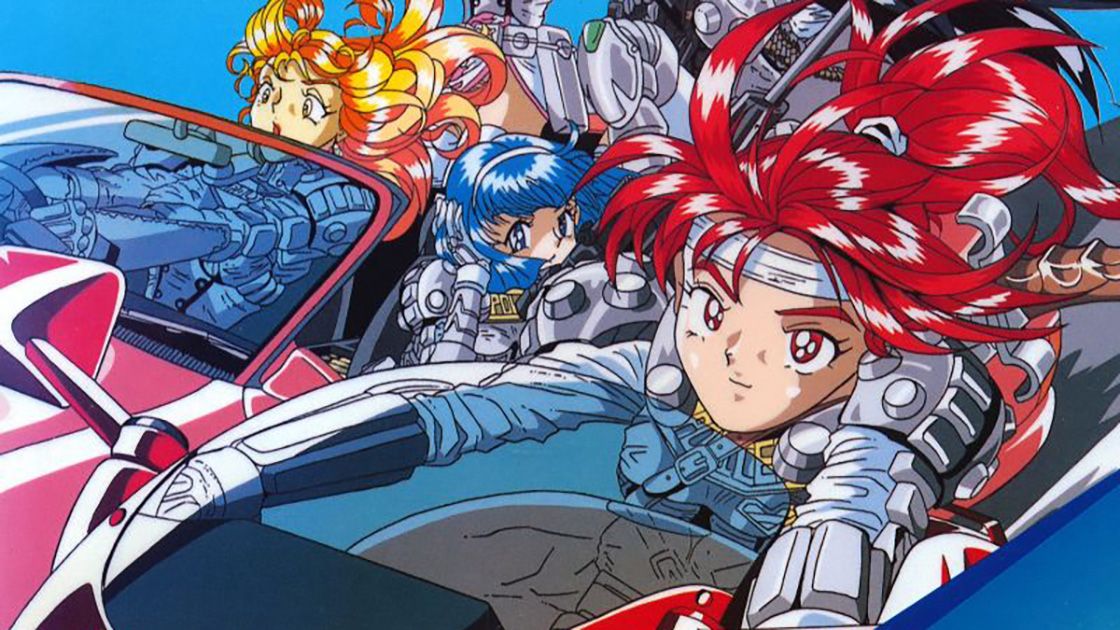 Pasokon Retro is our regular look back at the early years of Japanese PC gaming, encompassing everything from specialist 80’s computers to the happy days of Windows XP.

SystemSoft’s long history is littered with strategy games. From Imperial Forces’ sci-fi setting to Master of Monsters’ all-out fantasy, if SystemSoft’s developers could find a way to slap a grid on top of a map and then bestow themed units with a list of stats, they did it. And they often did it well. Decades later the SystemSoft Beta label is still busy creating modern entries of some of its more popular series, including the magical Tir Na Nog and war themed Daisenryaku (the latter’s even on Steam).

Many of SystemSoft’s games fit comfortably into obvious genres, but then there’s 1996’s Tuned Heart, a complete one-off where the titular squad of young adult police officers live in a Japan similar to but slightly different from the real thing. Like many colour coordinated groups of fictional women they love spending their days enthusiastically fighting crime, taking orders from their beloved blank slate of a captain, and not-so-subtly trying to win his—and by extension, the player’s—romantic attention.

All of their crime fighting is done from either the seat of a car or the back of a motorbike, with justice dispensed one pixelled bullet at a time. Unusually the bikes they ride aren’t just vaguely based on popular real-world models—many of them are officially licensed Kawasaki machines from the era, rendered in exquisitely detailed pixel art form.

Before long even those with no real interest in the finer points of ’90s motorbike design will be able to talk about the differences between a ZXR 250 and a KSR-II, or appreciate the sweeping curves and eye-catching headlamp on a Balius.

The guns fired by the Tuned Hearts are as accurate as the bikes, everything from handguns to gigantic shotguns painstakingly recreated in crisp pixels. The valuable screen space given over to the (technically useless) side-on views of each named firearm, every hammer, sight, and gun barrel meticulously transferred from reality to floppy disc, gives off a “Someone voluntarily subscribes to magazines on this subject and pins the centrefolds to their cubicle wall” vibe that would feel a little concerning if the game didn’t so cheerily embrace its own gun nerdery.

Naturally Kawasaki had a major concern with Tuned Heart’s official mix of their machines and cartoonish gun violence—biker safety. The manual takes pains to point out that not only is the game a work of fiction but also that although the characters within are shown riding motorbikes without helmets, nobody should ever copy them in real life because that’s dangerous and illegal. It’s only after this that the concerned boxout somberly reminds us all that shooting guns at people is dangerous and illegal too, and also not to be imitated.

Thanks for the clarification, Tuned Heart.

That’s as solemn as the game ever gets though, with the rest of it having too much fun being too willfully daft to care about how its mish-mash of dissonant styles go together. Defeating an enemy causes their vehicle to explode in a Looney Tunes style puff of smoke with a solitary tyre comically boinging off the screen just for good measure. Characters will have a little cry if they’re defeated in battle, and then always come back for the next one fresh and smiling. One recurring friendly detective is definitely not based on Columbo. And of course firing a high-powered sniper rifle out of a car window whilst driving the car has a certain amount of absurdity baked into it for free.

But as consciously silly as just about everything in Tuned Heart is, the game’s far more serious about its strategy than it may appear. A sincere effort’s been made to tie the bikes, cars, and guns into the grid-based gaming running underneath in meaningful and often inventive ways.

Instead of typical character equipment Tuned Heart lets you “tune up” your transport instead. Sleek motorbikes and police cars with adorably squishy proportions can be kitted out with a range of fresh mufflers and new aluminium frames either given away by NPCs or dropped by defeated enemies. Movement has also been given a unique twist, with high and low speed states dictating how far characters move not just on this turn, but on the next one too. A character moving at high speed (as “high” as turn-based movement allows, anyway) will find it easy to zip off and chase down a distant target, but they might end up doing it alone, as someone else who applied the brakes—to blast away at a closer villain or use a special skill to heal an ally, for example—will need a little extra time to get back up to speed.

The guns the cast fire all have a very limited supply of ammo that can only be replenished at service stations and police stations dotted around each map, or via one character’s limited-use special battle ability. It’s a restriction that encourages a more thoughtful use of the team than simply having them all pile on whoever’s nearby and potentially leaving them completely defenceless next turn.

How many bullets does someone have left? Where’s the nearest service station, and is there a clear path to this strategically significant feature? Would it be better to have someone back off now, or squeeze every last shot possible out of them first? These are all things that need to be kept in mind, even when a young woman in a fashionable pink hat is unloading her shotg-sorry, her Remington M870, on this mission’s criminal underlings.

This welcome complexity is balanced out by Tuned Heart’s heavy streamlining. It’s constantly whisking players back and forth between battles and short scripted events. This lack of freedom is something of an unexpected blessing, as thanks to this it’s impossible for the game’s power curve to escape its players. There are no bad purchases to waste money on, no essential upgrades forever missed, no nagging feeling a dialogue option three battles ago was the reason why this current fight’s so tough.

How many games combine this level of real-world mechanical detail with brightly coloured anime cuteness? Not many. But there’s a certain something about it that makes it more than a simple novelty. There’s an unnecessary level of detail and joy in here that makes spending time with Tuned Heart feel like someone is excitedly showing you a few of their favourite things. More games should be brimming with things their creators unabashedly love, even if on paper they go together like chalk and cheese.