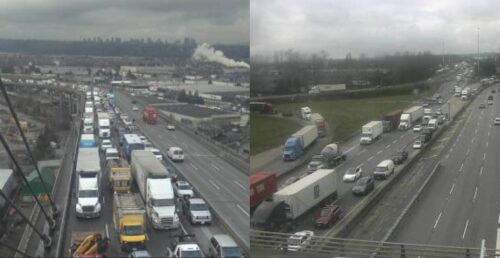 The southbound lanes of the bridge were closed just before 1 pm and reopened around 9 pm.

Delta Police say officers who were helping someone experiencing a mental health crisis decided to partially close the bridge for several safety reasons.

However, police admit serval drivers created distractions that impacted police’s priority, “including drivers ‘rubber-necking’ to get a view, honking horns, yelling at the individual in crisis, and even encouraging them to take action.

“Some impacted drivers walked up the bridge deck, made contact with officers, interfered with the negotiations, and even videoed or photographed the individual in crisis.”

Some frustrated drivers who were gridlocked on the bridge apparently took dangerous chances, drove aggressively and, in some cases, led to secondary collisions.

In one instance, officers assisting with the situation had to respond to a collision involving a frustrated motorist.

Police say a driver that attempted to drive around several highway vehicles that were managing the road closure hit one of the vehicles and a concrete barrier, causing several thousand dollars of damage to all vehicles involved.

An hour later, around 7 pm, a flagger, highway workers, the individual, and first responders were put in danger when a driver ignored directions from a flagger, police say.

The driver was issued a 90-day driving suspension and a 30-day vehicle impound after police confirmed they were “impaired.”

“As first responders, the DPD sees the impacts of mental health daily. It can grind lives to a halt, as we saw yesterday, but to stop the stigma surrounding mental health, everyone must do their part,” a statement from police reads.

The police incident on the bridge deescalated around 8 pm.

“I am proud of the work and commitment of all first responders, which led to the team saving the distressed individual’s life in a mental health crisis,” Chief Neil Dubord said. “We also recognize that the bridge closure caused frustrations, and our team will review this incident with our partners to determine how we can lessen the future impact on the public.”