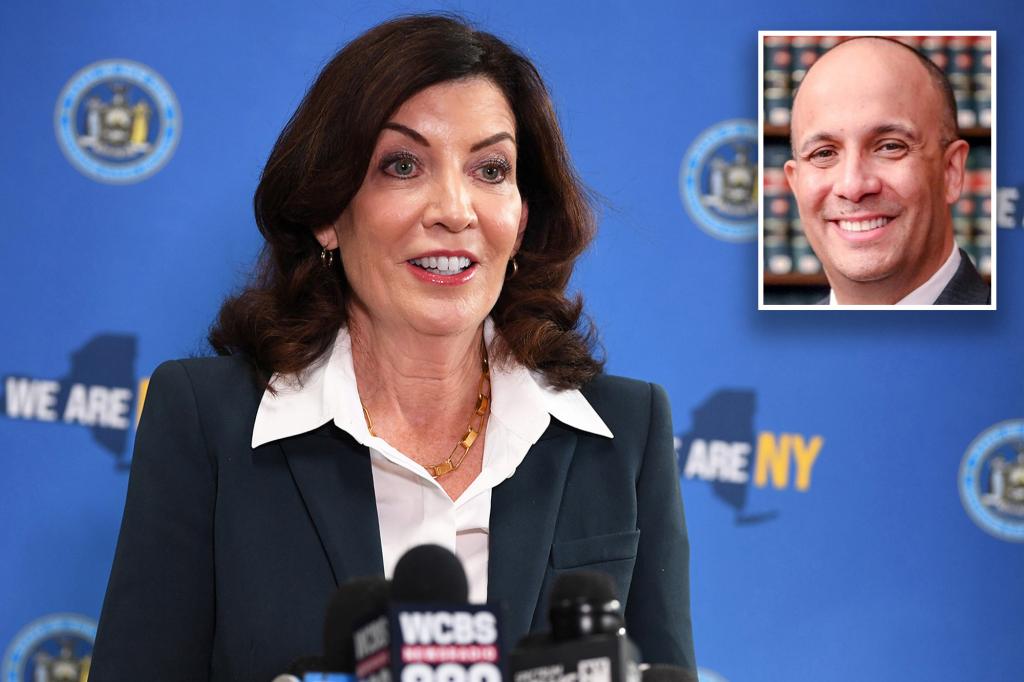 Gov. Kathy Hochul is locked in a fierce fight with Democratic state senators egged on by powerful labor unions after announcing Thursday her nomination of centrist Hector LaSalle to lead the state Court of Appeals.

Latinos are celebrating the nomination of the first non-white person to lead the state’s highest court — but an increasing number of progressives say LaSalle is not lefty enough on key topics like abortion and labor rights.

“There is going to be carnage here,” a legislative source told The Post on Friday. “This is going to get f–king ugly.”

The escalating conflict between Hochul and Democratic legislators was already nearing historic proportions by Friday afternoon as one Democratic senator after another announced they will vote to make LaSalle the first person ever rejected by the state Senate to lead the state’s highest court.

“After a careful review of the nominee, I am forced to conclude he would be regressive on issues impacting women’s rights, labor issues, and climate change. I will be a ‘no’ on Judge LaSalle,” state Sen. Rachel May (D-Syracuse) tweeted Friday morning.

Hochul needs 32 senators in the 63-member chamber to support the nomination, but nine of 43 Democrats already say they will vote against the former Long Island prosecutor.

If more than 11 Democrats buck Hochul, she will need Republican votes to get LaSalle approved by a majority of the full chamber if his nomination somehow gets through the Judiciary Committee.

Key players in the nomination process like state Senate Majority Leader Andrea Stewart-Cousins (D-Yonkers) and Judiciary Committee Chair Brad Hoylman (D-Manhattan) have yet to say how they might vote.

But powerful labor unions like the AFL-CIO and 32BJ announced their opposition to LaSalle as the ideological tenor of the court hangs in the balance.

Progressives are also emboldened to make a stand against LaSalle after putting up little resistance to former Nassau District Attorney Madeline Singas getting named by disgraced ex-Gov. Andrew Cuomo to the court despite criticism that her prosecutorial record would push the Court of Appeals to the right.

Former Chief Judge Janet DiFiore, who unexpectedly resigned months ago amid an ethics probe, faced criticism for years over the rightward movement of the court despite New York’s reputation as a progressive stronghold.

Some Democrats had hoped that her downfall might lead to a chief judge who would push the state judiciary in a more progressive direction at a time when the US Supreme Court remains firmly in conservative hands.

“The Court of Appeals can and should act as a bulwark against such federal attacks,
protecting New Yorkers and defending the rule of law. But under Chief Judge Janet DiFiore, it has done neither,” reads an August letter to Hochul from progressive advocacy groups.

LaSalle was one of seven candidates for the chief judge job picked by a panel empowered by state law to screen potential jurists for gubernatorial nomination.

Much of the opposition to the former prosecutor stems from his involvement in a few controversial rulings while serving in the state Supreme Court’s Second Department in Brooklyn, where he currently works as presiding judge.

One case involved letting cable companies sue union leaders for defamation while another rejected a subpoena from the Office of the State Attorney General into anti-abortion “Pregnancy Crisis Centers,” according to New York Focus.

Some Republicans, however, might be more receptive to his legal track record than their progressive counterparts, especially considering how Hochul could nominate someone more to the left if LaSalle’s nomination failed to get approved.

But some members of the GOP Senate minority are hardly in a rush to help Hochul out while leaving the option open.

“I will have to review his background and reserve judgment. But so far from what I am hearing, he doesn’t appear to be qualified for the position,” state Sen. George Borello (R-Jamestown) told The Post.

“Will I vote for him? I don’t know. It’s too early to tell,” state Sen. Pat Gallivan (R-Elma) said of his own stance on the nomination. “I don’t view this as a Republican or Democratic vote … we want to make sure the individual is qualified for the job.”

Republican Minority Leader Robert Ortt (R-North Tonawanda) could not be reached for comment Friday about whether he might be open to urging members of his conference to support LaSalle for chief judge.

Hochul told reporters Friday she is sticking with LaSalle despite the growing backlash and increasing likelihood that she will have to court Republicans in January to support the embattled nomination.

“I’m standing with him. I’m proud of this selection,” Hochul said at an upstate press briefing. “And I encourage everyone to give him the fair hearing that he’s entitled to.”