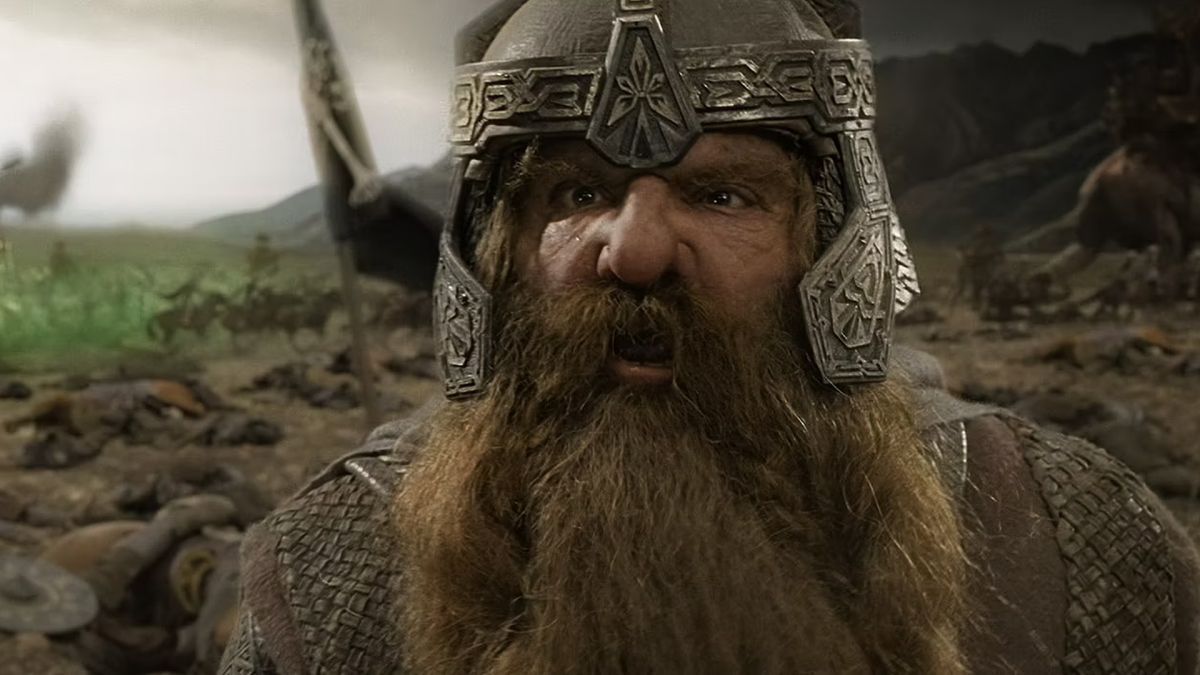 So, you’ve mastered the basics in our Dwarf Fortress beginner’s guide (opens in new tab). You’ve gotten your dwarf fortress off the ground, a somewhat functional outpost among the wilds ready to make a go of it.

But there are dangers out there. Animals, thieves, and warlike enemies just waiting to take all you’ve earned. You’ll have to be ready to fight back—whether that’s by clever defense, stout walls, or a band of highly trained soldiers, you’ll need a good way to either take down or avoid your enemies.

Conflict is inevitable in Dwarf Fortress, but being prepared for it isn’t.

Start with a drawbridge

The hands-down best way to defend your fort is a heavy stone drawbridge. Unlike a lot of other things in the game code (like doors), a dwarven drawbridge is not a capital-b Building, but a Construction, which cannot be destroyed. It’s a floor when down, or it’s a wall when up: So under Dwarf Fortress rules it can’t be destroyed by even the largest enemies.

To make a nice drawbridge, have your masons make some stone blocks. Use those Blocks to build your bridge, but be sure to choose it as a Raising bridge in the icons that pop up and be sure it raises to the right direction. Height and length don’t matter here.

Then use a Mechanic’s Workshop to make some Mechanisms out of nice hard stone. You can use these to build a Lever in your common area, then more Mechanisms to connect that Lever to your bridge. Telling dwarves to pull the lever will raise the bridge. Bonus points if you fill a nice deep pit beneath it with upright spikes and wait for enemies to stand on it before giving the order to raise—they’ll all fall off into the spikes.

A scrappy militia is better than no militia

By pressing the Q shortcut or clicking the banner icon in the lower right you’ll bring up the Militia menu. This is where you can create and mobilize squads of military dwarves. You can use the sword icon here to send them after specific targets, and the arrow icon to send them to defend a specific location. Note that they’ll automatically go after any enemy they see from there—no such thing as battle discipline in Dwarf Fortress.

It’s useful at first to just start a squad and fill it with your dwarves, giving them the Leather armor preset. Even with no proper equipment to give them, a pack of dwarves with your default copper bring-along weapons can defeat a few examples of dangerous local wildlife: Dingos, wolverines, thieving keas, or particularly angry geese.

Later you’ll want to make a proper squad and tell them to equip proper armor and weapons, when you have them, or create custom sets of equipment if you don’t.

Once the fort is running decently, usually by the first autumn or winter, you’ll want to dig out or build a room for a barracks. This is usually a decent-sized 10×10 room with 10 beds, some chests, some cabinets, and a few armor and weapon racks for flavor. It’s good to put it somewhere near the entrance, or near where you expect enemies to come from.

Once created, you can use the Zone interface to tell certain squads to train, sleep, and store their stuff here. Putting your first few squads of militia dwarves on a schedule of partial training is a good call: They’ll train for three months out of every six, and do normal work as assigned for the other three. They can serve as auxiliaries for big enemy attacks.

Once you get enough dwarves that you feel safe sending some to train full time, start putting migrants without useful skills into a military squad that’s told to train full-time and sleep in the barracks as well. Set their schedule to Constant Training and fill the squad over time, then start a new one. I like to have 20 full-time military dwarfs in a fortress of 200, with a reserve of 30-40 as part-time militia.

Good military candidates include dwarves with practically useless skills like legendary soapers, potash-makers, and millers—but really anyone without traits like weak, frail, and sickly will do fine. Don’t worry about making training weapons, or anything like that—you don’t need them.

Migrant hunters are excellent candidates for squads of crossbow-wielding marksdwarves. When you want those, you can build a nice range for them to practice in—put it next to the barracks and be sure to give it one entrance, on the side they’re shooting from.

Spears, battle axes, and war hammers are the mainstays of dwarven militaries. Armor and weapons are generally best when metal, but leather, bone or even wood can do in a desperate pinch.

Here’s your general order of quality with metals:

Most nasty enemies are best taken down with cutting weapons, so battle axes do well against them by removing limbs. I recommend battle axes for your first squad, then war hammers for your second. Well-armored enemies like goblin sieges are best killed with war hammers or maces, which crush through armor. War hammers are especially important against undead and Necromancer attacks because they destroy (“pulp”) limbs rather than sever them, because a severed limb can just… animate and keep attacking.

There are two exceptions to materials rules:

I’ll also note that your team of miners can make a great auxiliary militia squad: The skill used to attack with a pick is mining, so they’ll be very good at it. Just make a new outfit of all-metal armor for them to wear.

…or go for unarmed combat, instead

Not enough metal for good weapons and armor? Dwarves can make remarkably good wrestlers, and even if you don’t have enough weapons for them to equip they’ll happily train in unarmed combat. Dwarven MMA gets the job done a lot of the time, and can help if and when your dwarf is disarmed mid-fight. That said, even an armed novice can trump an unarmed master.

You can also get a lot done with animals. The most effective way to ward off kobold thieves and goblin kidnappers is to put a pen/pasture zone near the entrance to your fort for the dogs, then train those dogs as War Dogs in the Units menu, Pets tab. Trade with the humans and elves for something like grizzly bears, gorillas, or even elephants if you want to take this philosophy further—or capture and train them yourself.

I, personally, am a very big fan of trained War Grizzly Bears.

Not much beats a hallway filled with traps. Your own citizens won’t trigger them, nor will visitors, and softening up attackers by running down a long hall of dangerous sharp things works wonders. A very effective early defense is just a hall filled with Stone-fall Traps, which just drop a heavy rock on the bad guys. It won’t stop a troll, but it will stop a wolf.

As you upgrade your military’s weapons I suggest putting the old ones into weapon traps. It’s also a great use of excess bone: Carve it into bone crossbows and bone bolts to set up a ton of vicious crossbow traps. For bonus points (from me) make weapons that can only go into traps in your metalsmith’s workshop:

I don’t recommend cage traps too much early on. They’re fun to catch enemies and wild animals with later, but require a little more management than beginners will want to fuss with.

Once you’ve got your feet under you, try making more complex traps. A favorite is a drowning chamber: A sealed room with drawbridges at both ends and floodgates in the ceiling, each of which has a channel above it linked to a water source. Enemies enter, you pull the levers to raise the bridges. Then pull the levers to flood the room. Once they drown, you pull a final set to open the lower floodgates and drain the room into something like an underground cavern or sea.

Dwarf Fortress enemies to watch out for

We’ll close out with some descriptions of what might come for you. No spoilers.

💰 Robbers are groups of kobolds who want to steal your stuff or goblins who want to kidnap your children. They’re not visible to you until a dwarf spots them. The best defense here is to be sure that animals like dogs are always near the fort entrance: They’ll sniff em out so you can send the militia after them. Note that robbers will bypass traps!

🦹‍♂️ Ambushes are similarly hidden groups of attackers that, rather than steal, want to cause mayhem. They’re smaller and can be very dangerous for your isolated woodcutter or herbalist working outside the fort, but can be run off by even a small militia.

🗡 Sieges are large attacks of enemies that want to destroy your fort. Goblins and elves will charge right in, happily running into trap-filled hallways. You can kill enough of them that they run or wait them out—they’ll eventually leave. Elves are usually easy to kill because they only use wooden weapons and armor, but sometimes they’ll bring giant animals as allies. Human sieges can be nasty because they’ll actually just set up camp outside and wait you out, harassing dwarfs that leave the fort and killing inbound trade caravans. Necromancer attacks are a horror, so as a beginner… just don’t start anywhere that says you have a necromancer as a neighbor.

Megabeasts are nasties that include dragons, colossi, giants, and titans, all manner of horrors. They generally attack from above ground and are very capable of destroying buildings and doors. Some, like Bronze Colossi and dragons, are extremely dangerous due to their incredible resilience and/or fiery breath. This is often a case where discretion is the better part of valor if you lack confidence or a strong military: Seal up the drawbridge and wait for it to leave.

🦇 Underground natives exist, including cave fish-men, bat-men, reptile-men, and rat-men, and can be either peaceful or hostile towards your fortress. Once you open up a level of the caves, hostile cavern dwellers will send raids and ambushes against you every once in a while. They’ll come more often if you cut down lots of mushroom trees and do lots of underground fishing. Make sure to defend your underground fort entrances just as well as those above.

🕷 Forgotten beasts of course, those experiments the gods forgot during creation also lurk, sealed in the caverns beneath the earth. I won’t say much, but be wary of them, especially if they spit webs, exhale poison gas, or are made of an exceptionally resilient-sounding substance. The warnings for megabeasts apply here.

Things that go bump in the night

Dwarf Fortress also has vampires and werecreatures, which can either attack outright or infiltrate your fortress disguised as migrants. Werecreatures especially are afflicted with a contagious condition that can ruin your fort. I’ll leave you to figure out how best to defeat these enemies… but be especially aware of any suspiciously pale migrants who’re hundreds of years old and have very high skills.

Too greedily, too deep

There are of course older and fouler things than goblins in the deep places of the world, where ancient and nameless things gnaw upon the pillars of creation.