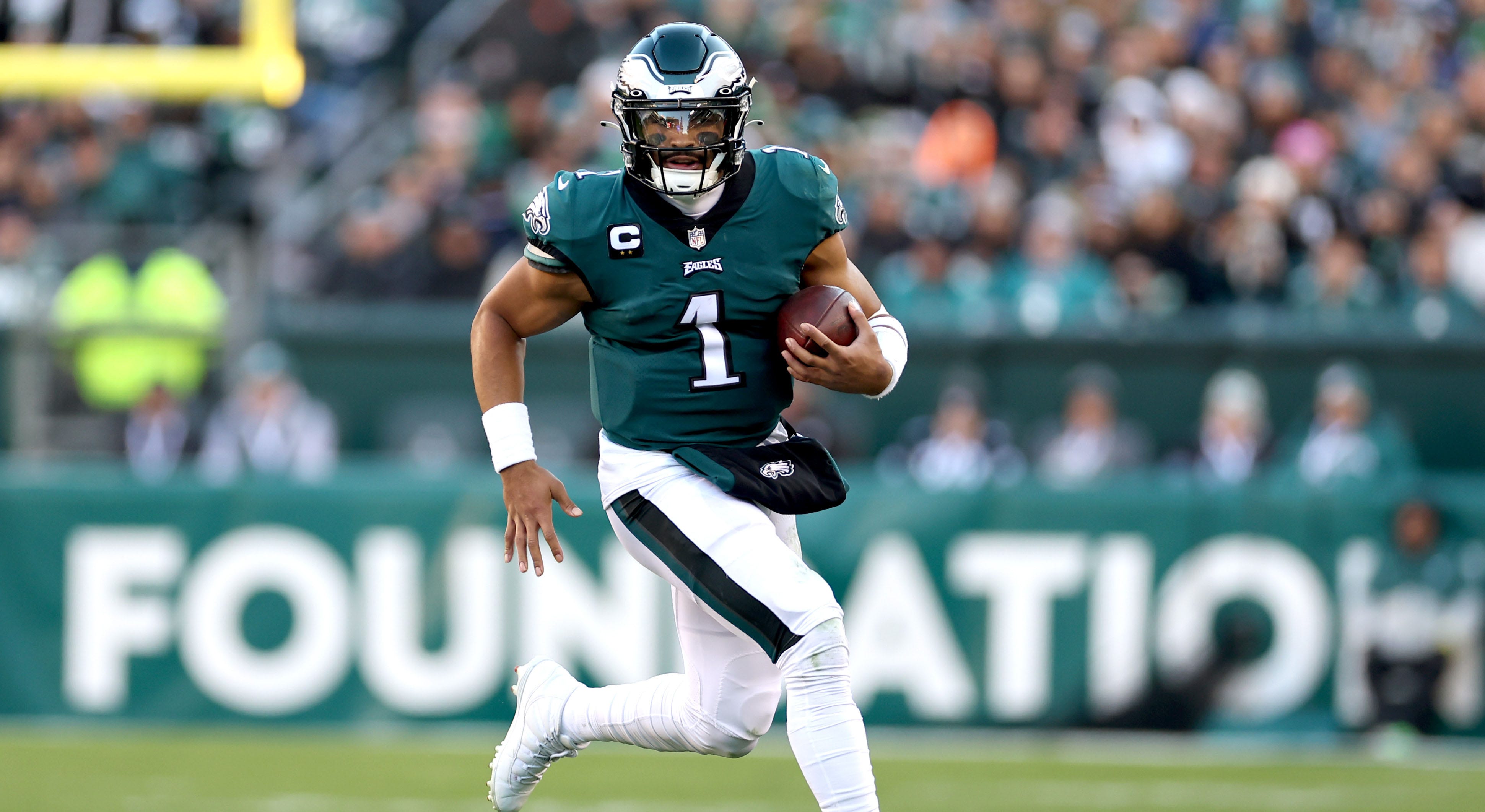 Philadelphia Eagles quarterback and leading MVP candidate Jalen Hurts will be on the sideline for this week’s game due to a shoulder sprain.

Fourth-year quarterback Gardner Minshew will get the nod for Philly (13-1) Saturday against the NFC East rival Dallas Cowboys (10-4).

A win over Dallas would clinch the NFC East and the No. 1 seed in the conference. Only the top seed in each conference gets a bye in the playoffs.

Jalen Hurts of the Philadelphia Eagles runs with the ball in the third quarter of a game against the Tennessee Titans at Lincoln Financial Field Dec. 4, 2022, in Philadelphia.
(Scott Taetsch/Getty Images)

“Jalen did everything he possibly could to get his body ready to go,” head coach Nick Sirianni said Thursday. “And, at the end of the day, he’s not going to be able to do it. He tried like crazy. And I know he still wants to go. Jalen Hurts is the toughest player I’ve ever been around.”

Earlier in the week, Sirianni hinted that he was not counting Hurts out due to his toughness.

TITANS’ RYAN TANNEHILL ‘VERY LIKELY’ OUT FOR THE REST OF THE SEASON; ROOKIE QB MALIK WILLIS TO START: REPORT

The 24-year-old sat out of practice Wednesday. He suffered an injury to his throwing shoulder in the Eagles’ Week 15 win over the Bears. He appeared to injure the shoulder when was tackled after a 3-yard run in the second half.

He was slow to get up after the hit, but he played the remainder of the game.

When asked about Hurts’ availability for next week’s game against the New Orleans Saints, Sirianni said the team would take it day by day.

Clinching the No. 1 seed means the Eagles would get a bye during the first week of the postseason. It would also give the coaching staff some flexibility when it comes to potentially playing Hurts in the last two games of the regular season.

COMMANDERS’ JEREMY REAVES BREAKS DOWN AS HE LEARNS ABOUT PRO BOWL SELECTION: ‘HE DESERVES IT’

Hurts’ injury is not expected to linger or require surgery, meaning the quarterback will likely be available for the playoffs.

Minshew has handled snaps with the first-team offense during practice this week. The sixth-round draft selection out of Washington State was away from the team Tuesday to speak at the funeral service for the late Mike Leach.

Jalen Hurts (1) of the Philadelphia Eagles hands the ball off to Miles Sanders (26) in the third quarter against the Indianapolis Colts at Lucas Oil Stadium Nov. 20, 2022, in Indianapolis.
(Justin Casterline/Getty Images)

Minshew was the quarterback under Leach in 2018.

While he was away, Minshew communicated with coaches via Zoom and FaceTime to keep up with everything going on at the team walkthrough Tuesday.

This won’t be Minshew’s first time stepping in for Hurts. He filled in for an injured Hurts last season in a game against the Jets. He also gained starting experience during his time with the Jacksonville Jaguars.

Hurts’ third year in the NFL is proving to be his best yet. He has thrown for 22 touchdowns and added another 13 on the ground. He is completing just over 67% of his passes and is widely viewed as the leading candidate in the MVP race ahead of Patrick Mahomes and Josh Allen.

Chantz Martin is a sports writer for Fox News Digital.