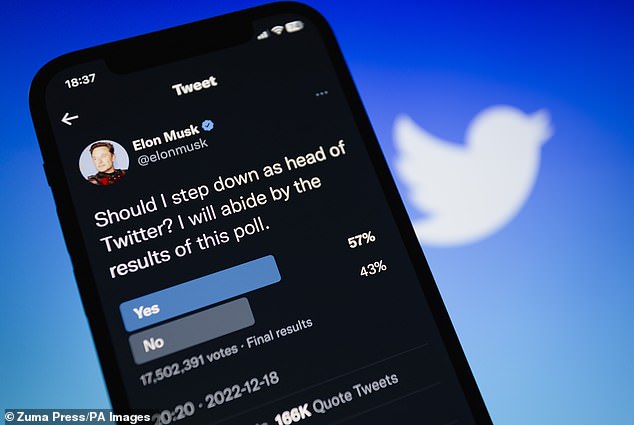 Elon Musk has finally broken his silence after a Twitter poll recommended he stand down from the social media platform.

Musk said that only Twitter Blue subscribers will be able to vote in future policy-related polls on the platform, in his first comments since millions of users voted for him to resign as chief executive of the site.

On Sunday, the Tesla boss said he would ‘abide by’ the result of a highly unscientific poll he organized and promised to honor, asking Twitter users whether he should step down.

The result was confirmed on Monday morning, with a total of 57.5 percent of more than 17 million accounts voting for him to step down from his role.

Normally a prolific user of the platform, Musk, who also runs car maker Tesla and rocket firm SpaceX, did not tweet in the immediate hours following the poll.

His silence was finally broken just before 11.30pm Monday, when he responded: ‘Interesting’ to a suggestion from convicted fraudster Kim Dotcom, founder of the once wildly popular file-sharing website Megaupload, that the results of the poll were skewed by fake accounts.

Replying to another user’s suggestion that ‘Blue subscribers should be the only ones that can vote in policy-related polls,’ Musk said: ‘Good point. Twitter will make that change.’

His Twitter stream continued into the early hours of Tuesday morning, linking to the site’s World Cup statistics and laughing at a satirical take on Bruce Wayne running a poll about stepping down as Batman. 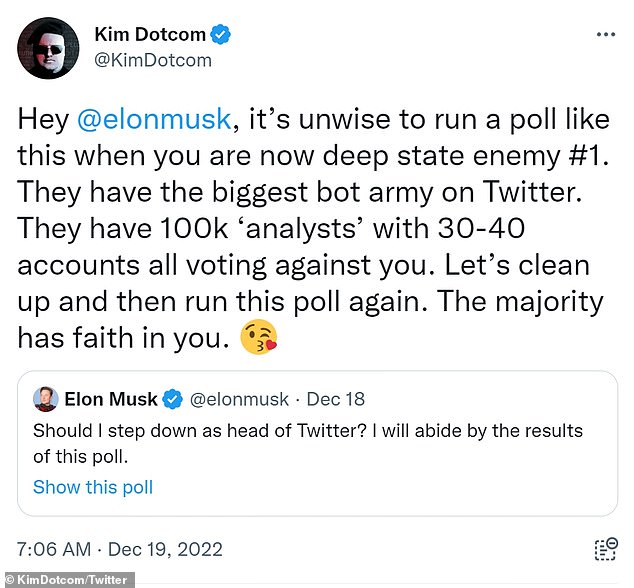 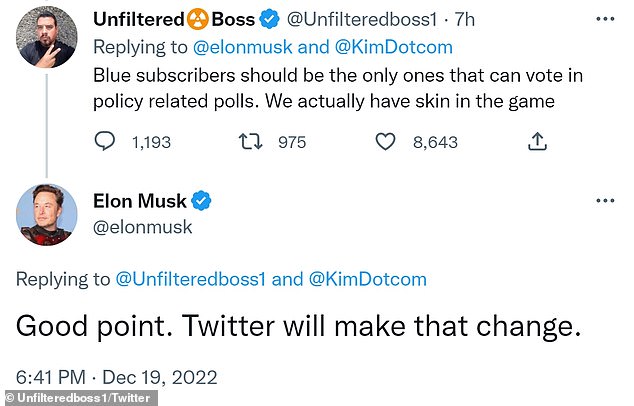 Replying to another user’s suggestion that ‘Blue subscribers should be the only ones that can vote in policy related polls’, Musk said: ‘Good point. Twitter will make that change.’ 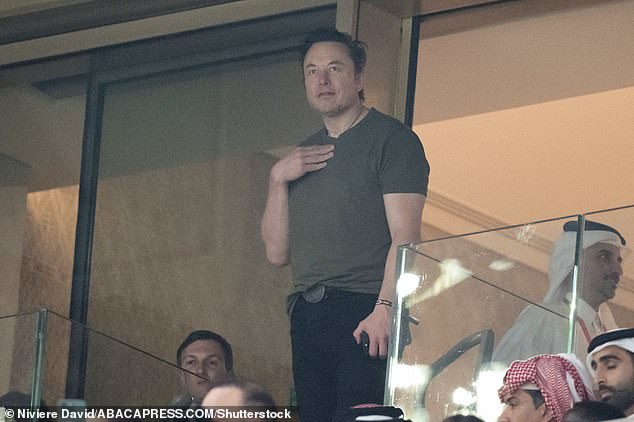 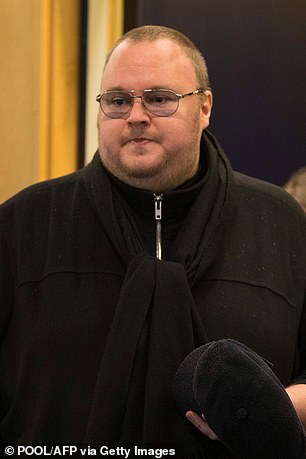 Twitter Blue is a paid-for subscription which allows anyone to buy a blue tick verified badge for their account.

In response to another tweet, the South African-born billionaire added: ‘No one wants the job who can actually keep Twitter alive. There is no successor.’

In discussions with users after posting his latest poll, Musk renewed his warnings that the platform could be heading for bankruptcy.

Resorting to Twitter’s polling feature has been a favorite strategy of Musk’s to push through policy decisions, including the reinstatement of Donald Trump’s account. 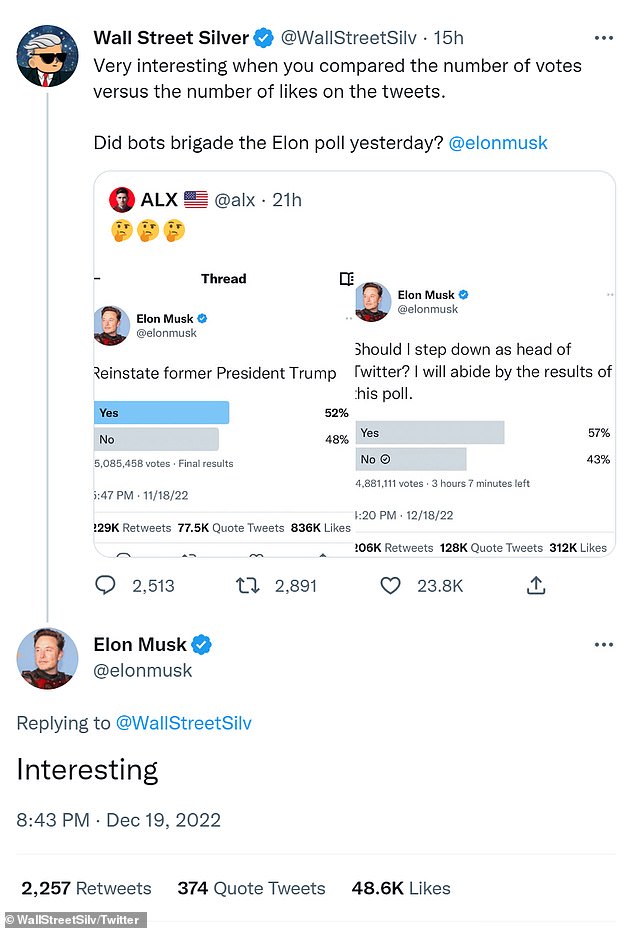 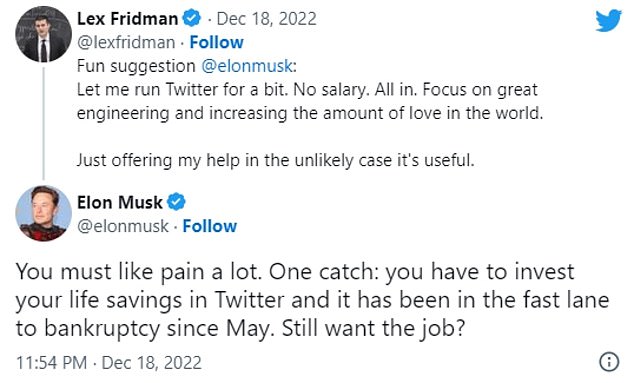 Prior to the poll’s conclusion, Musk appeared to be interacting with people offering to take over his role as CEO

The former president has said he has no interest in rejoining the platform.

Paris-based Reporters Without Borders, which defends press freedom around the world, said the polls were a ‘crude and cynical’ ploy.

‘These methods appear to be democratic procedures, but in reality they are… the opposite of democracy,’ said the group’s head, Christophe Deloire.

In recent days, Musk has suspended the accounts of several journalists after complaining some had published details about the movements of his private jet, which he claimed could endanger his family. 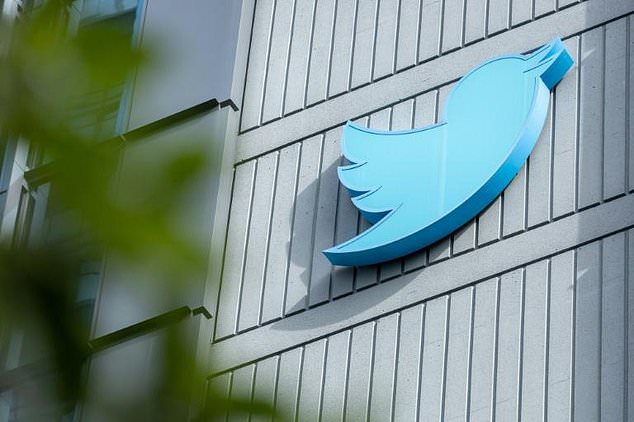 Employees of CNN, The New York Times and The Washington Post were among those affected in a move that drew sharp criticism, including from the European Union and the United Nations.

Some of the suspended accounts have since been reactivated.

On Sunday, Twitter users were told they would no longer be able to promote content from other social media sites.

But Musk seemed to reverse course a few hours later, writing that the policy would be limited to ‘suspending accounts only when that account’s *primary* purpose is promotion of competitors.’

‘Going forward, there will be a vote for major policy changes. My apologies. Won’t happen again,’ he tweeted.

The attempted ban had prompted howls of disapproval, and bemused even Twitter cofounder Jack Dorsey, who had backed Musk’s takeover.

His Sunday night poll came after weeks of controversial decisions including sacking half of Twitter’s global staff, readmitting far-right figures to the platform, and trying to charge for previously free services. Twitter has also said it would no longer work to combat Covid-19 disinformation.

Analysts have also pointed out that the stock price of Tesla has slumped by one-third since Musk’s takeover. The share price briefly rallied by 3.3 percent on Monday before fading again.

Some online safety groups have accused the billionaire of allowing hate, abuse and misinformation to more easily circulate on the platform because of his free speech principles.

While it remains unclear who could replace Musk if he does decide to step down, several commentators have noted that the billionaire would still have the final say on major decisions as Twitter’s owner.