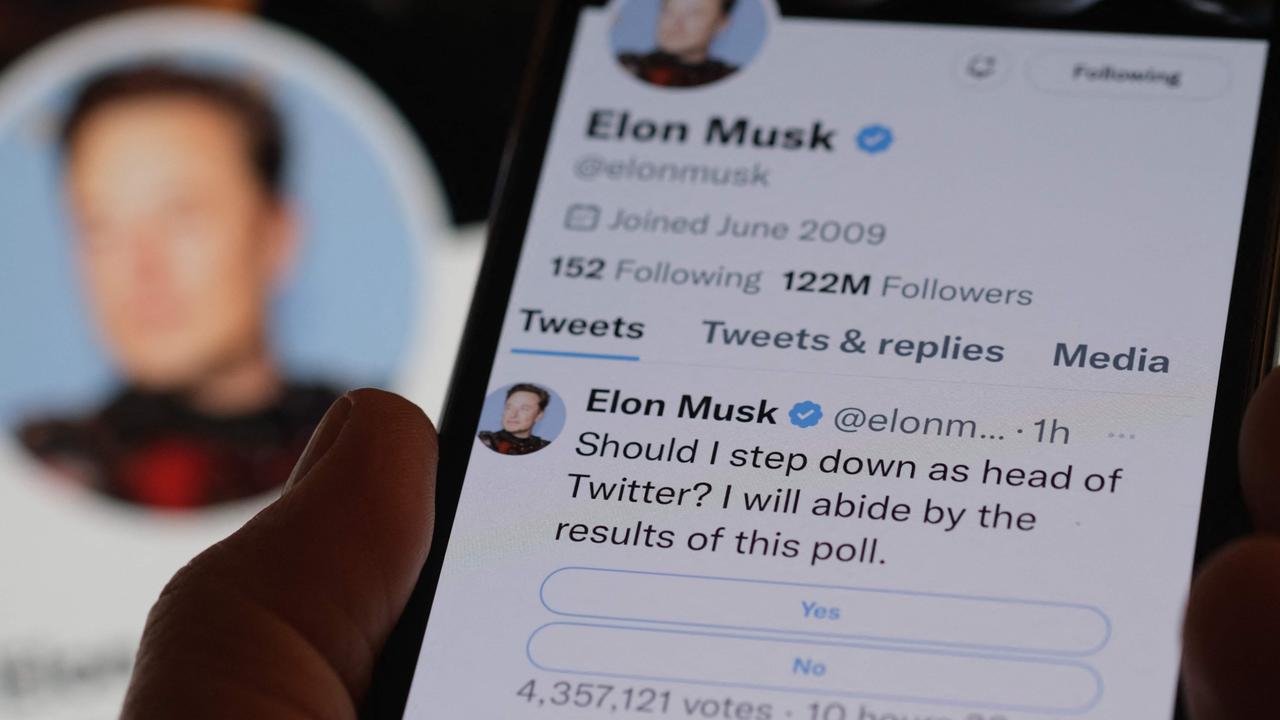 Elon Musk appears to have moved the goalposts at Twitter after an online poll he set up to see if he should remain as CEO, the results of which he said he would abide by, resulted in more than 57 per cent of people saying he should step down as head of the social media site.

Now Mr Musk has said he’ll only allow paying Twitter Blue subscribers to vote in future polls about how his $66 billion social media giant is run.

Twitter Blue subscribers, who pay up to $19 a month for little more than a blue tick by their name, could be more supportive of Mr Musk.

Nonetheless, media reports have suggested that Mr Musk is indeed looking for a new CEO to the tech firm which has gone through a turbulent time since the Tesla head begrudgingly bought it in October.

On Sunday, Mr Musk asked his 120 million followers if he should “step down as head of Twitter” and promised to “abide by the results of this poll.”

More than 24 hours after the poll closed early on Monday, Mr Musk, 51, had yet to directly address the vote result.

However, he replied to a number of tweets suggesting that the result had been unfairly swayed by “bots”, calling the theory “interesting.”

Notorious New Zealand internet entrepreneur Kim Dotcom told Mr Musk that it had been “unwise to run a poll like this when you are now deep state enemy #1.”

“They have the biggest bot army on Twitter,” he wrote.

“Let’s clean up and then run this poll again,” Dotcom tweeted, saying he hoped the poll was really “a honey pot to catch all the deep state bots” and “kill them all in one go.”

“Interesting,” Mr Musk replied, the same response he gave when someone else asked: “Did bots brigade the Elon poll yesterday?”

The Tesla mogul later agreed to a policy change when a user told him that “blue subscribers should be the only ones that can vote in policy-related polls. We actually have skin in the game.”

The Twitter Blue subscription — costing between $13 and $19 a month for the key verification checkmark — was one of the moves that sparked outrage among some users after Mr Musk bought the platform in late October.

It had previously indicated that a notable user was indeed who they said they were. But now a blue tick can simply meanings someone has paid Mr Musk a monthly fee and are not notable at all.

Mr Musk later said “there is no successor.”

However, US news outlet CNBC has reported that moves are afoot to find a CEO.

“As we’ve seen from his previous polls, oftentimes he sort of already knows the answer before he actually asks people to participate in said poll.”“From everything I have heard, he has been actively looking, asking, trying to figure out who the candidate pool might actually be,” Faber added.

Musk has yet to publicly indicate whether he has developed a short list of candidates. But some of Musk’s top advisers who have been active at Twitter since his acquisition closed are potential options, according to Bloomberg. The outlet noted that investor Jason Calacanis, former PayPal executive David Sacks and Andreessen Horowitz partner Sriram Krishnan have all played an active role in Musk’s Twitter takeover.