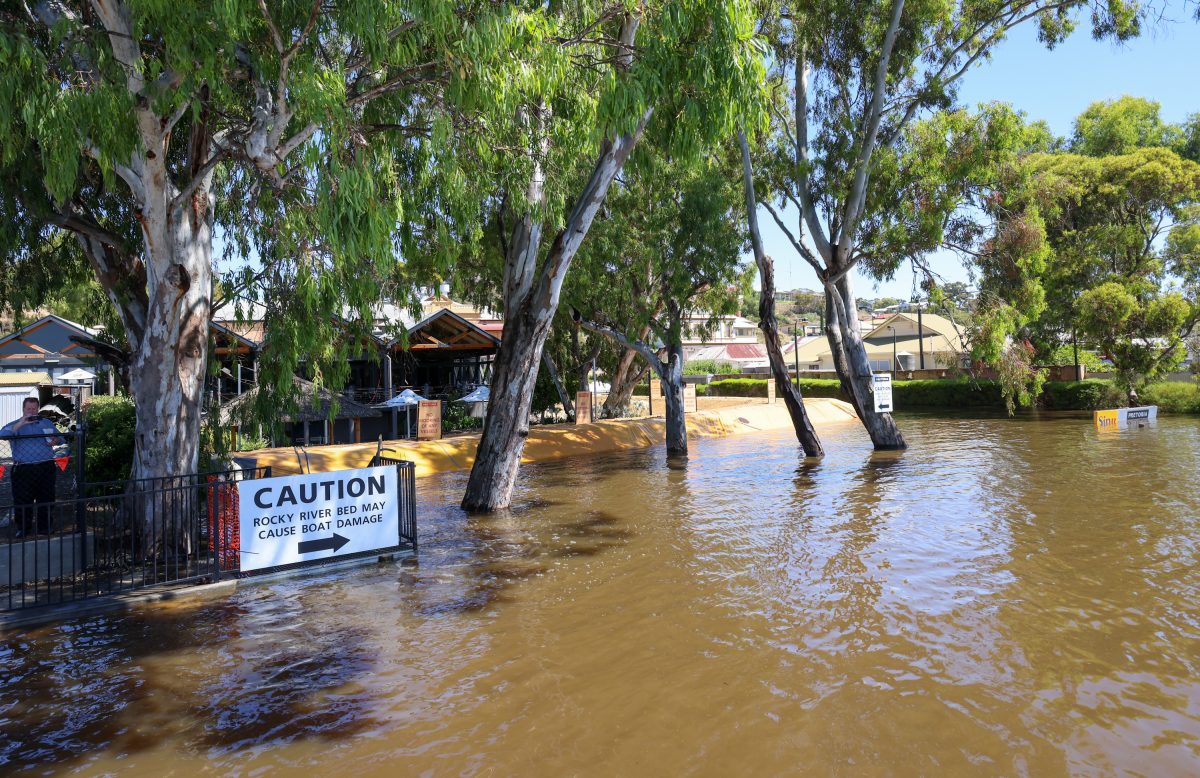 Numerous flooded roads are closed along the river and water is surging across bridges, boat and ferry crossing ramps.

“This is one reason you should not drive down roads with water flowing. Water had only just made its way over the road and it took the bitumen with it,” he said.

An Infrastructure and Transport Department spokesperson said the impacts of rising water levels and flooding on state government-managed roads in the Riverland and Murraylands regions is being closely monitored.

“This includes regular inspections of low-lying roads that may be at risk of closure,” the spokesperson said.

“As flood waters recede in coming months, the department along with its contractors will be conducting assessments and necessary repairs to reopen roads as soon as it is safe to do so.”

The spokesperson said repairs will be prioritised on roads supporting transport of essential supplies and services to the community and industry along with roads leading to ferry crossings.

And costs related to the flooding event would be “submitted through the Commonwealth Disaster Recovery Funding Arrangements (DRFA)”.

In Mannum, where the regular ferry service was shut down due to rising waters, Infrastructure and Transport Minister Tom Koutsantonis said this morning that a local tourist cruise operator will provide a free passenger service between Mannum and Cowirra for locals struggling to access work, shopping or medical services after the ferry was stopped with rising waters.

Koutsantonis said the State Government would look at providing similar services for other communities cut off from townships by ferries and roads being closed.

Four Knots Murray River Cruises will begin its service on December 27 for eight hours a day, with owner Chad Blatchford saying the 15 minute passage would be invaluable for locals living across the river from shops or having to travel up to an hour for medical services at Murray Bridge.

It would also support horticulture and grain businesses and workers harvesting.

“Bowhill Engineering have seven or eight people, they need to get across on a daily basis,” Blatchford said, adding the passenger transport could take 20 people at a time.

“For us, we had to shut down and this is a great lifeline for a local business and the community.”

Passengers at Mannum can board the service via the Bowling Club on the driveway next to the Pretoria Hotel, with car parking available at the Shearer car park.

Boarding at Cowirra is at two locations:

The River Murray flood peak of between 190GL and 220GL a day over the border is expected to reach Renmark in the next few days and Berri and potentially Loxton by this time next week.

This week the Kingston Road at Moorook was closed with a detour via Drogemuller Road and Heinrich Road to and from the Sturt Highway while Bookpurnong Road, the main road for people travelling between Loxton and Berri, has been closed for weeks.

A section of Taylorville Road, adjacent to Ross Lagoon and north of the Waikerie ferry, is still at risk of closure due rising water levels and may need to be closed within the next week.

Transport department advice is to take a detour via Goyder Highway and Devlins Pound Road will be in place to enable the Waikerie ferry to remain operational for light vehicles.

Media diversity is under threat in Australia – nowhere more so than in South Australia. The state needs more than one voice to guide it forward and you can help with a donation of any size to InDaily. Your contribution goes directly to helping our journalists uncover the facts. Please click below to help InDaily continue to uncover the facts.