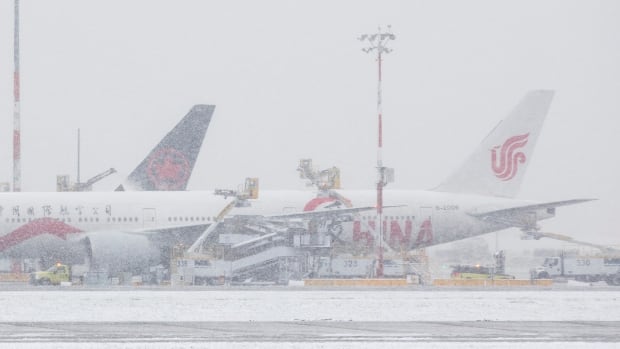 Heaps of blowing snow and unusually frigid temperatures have led to a series of ferry and flight cancellations on B.C.’s South Coast, creating travel mayhem near peak holiday travel season.

Authorities ranging from the provincial government to first responders and transit companies have asked residents on the Lower Mainland and Vancouver Island to stay home Tuesday because road conditions are not safe.

The weather has forced Vancouver International Airport to delay or cancel “a significant number of flights.” Several planes full of passengers have been sitting on the tarmac for many hours, unable to return to the gate to let passengers deplane.

“It’s as much of psychological challenge as it is a physical challenge as far as fatigue,” said Jeff Bryant, a passenger who has been stuck on his Toronto-bound WestJet flight since 8 p.m. PT Monday.

“I give a lot of people a lot of credit for challenging the inner turmoil they’re feeling.”

Travellers are asked Tuesday to check their flight status before leaving home. Those with cancelled flights are being told to not come to the airport.

Heavy snow blanketed much of the Lower Mainland overnight, covering parts of southern Vancouver Island under about 25 centimetres, while Metro Vancouver is coping with as much as 15 centimetres.

Police in Abbotsford, B.C., east of Vancouver, reported whiteout conditions along Highway 1 through the Fraser Valley.

Environment Canada said an additional five to 10 centimetres is still to come for most areas before conditions are expected to ease later Tuesday.

The University of British Columbia and Simon Fraser University have both cancelled in-person exams.

As for travel by sea, a spokesperson said B.C. Ferries has cancelled sailings on all three of its major routes between Vancouver Island and the Lower Mainland due to the weather.

Environment Canada has weather warnings in effect for virtually all of B.C., forecasting either blowing snow, extreme cold or Arctic outflow conditions.

Preliminary totals as of 6 a.m. PT show unusually heavy snow fell overnight into Tuesday in a number of places:

Vancouver is getting hit with another blast of cold temperatures and snow, causing treacherous conditions and prompting the province to ask people to stay off the roads unless they have winter tires.

The province said drivers in the Lower Mainland “are advised to stay off the road unless their vehicle is properly equipped with winter tires.”

For those with winter tires who have to drive, a statement Monday said drivers should pack an emergency kit in their vehicles.

WATCH | Tips and tricks for driving in the snow:

Tips and tricks for driving in the snow

CBC Vancouver host Lien Yeung takes a driving lesson at Mount Seymour with Driving Unlimited Academy instructor Patrick Ah-Yu, who shows her how to get a car winter-ready and provides tips on driving in snowy conditions.

Elsewhere around B.C., the ongoing deep freeze produced several daily minimum temperature records Monday, including a low of –46.8 C west of Williams Lake, while the Quesnel area broke a record set 78 years ago when it reached a low of –37.5 C.

Northern B.C. is covered in extreme cold or Arctic outflow warnings, with frigid conditions expected to continue this week.