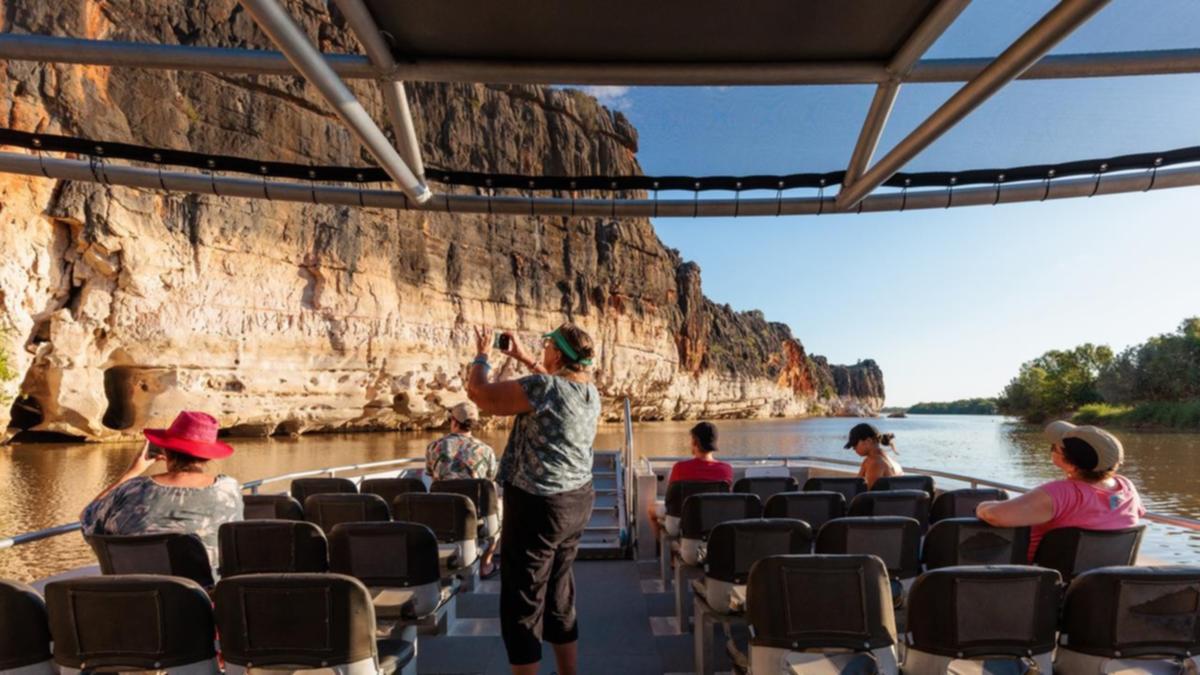 “If you like causing trouble, just bring up damming the Fitzroy River wherever you’re staying,” he quips.

Also known as Martuwarra, the Fitzroy is WA’s largest river. Its catchment spans almost 94,000 sq km, covering more than 20 per cent of the Kimberley region.

At full flood, it is said to be one of the largest rivers in the world.

For decades, developers and politicians have sought to draw upon the Martuwarra’s vast resources but faced fierce opposition from traditional owners and environmental groups.

The McGowan Labor government has maintained it will not dam the Fitzroy River or its tributaries.

But it has not ruled out allowing the extraction of up to 300 billion litres of surface water for irrigation proposals, with Gina Rinehart’s Hancock Prospecting among the potential suitors.

A draft water allocation plan has been several years in the making and appears unlikely to be released before 2023, with the department still working through more than 43,000 public submissions.

The Kimberley Land Council is among a number of influential organisations calling for the Martuwarra to be protected.

“Even though some of those groups may have different dreamings and different names … it’s all interconnected. The stories align,” he said.

“That’s why we’ve been very strong about saying any decision on the river can’t be from just one traditional owner group. It has to be made in agreeance by a cultural bloc.

“We don’t want to see the Murray-Darling experience happen where we’re trying to put water back into the system. We are really in a fortunate position in comparison.”

Against this backdrop, the joint management of national parks has emerged as a protective mechanism for Indigenous groups.

In 2020, they agreed to suppress their native title rights and convert large portions of pastoral leases for the state government to create new national parks along the Fitzroy River.

In exchange, they received funding for additional ranger positions, living areas and a capacity building fund, with an eye towards building wilderness lodges to be leased to a third-party operator.

Bunuba leader Joe Ross sees it as a way for his people to create opportunities on their own terms.

“We’ve been fighting to protect this river for many years,” the Bunuba Dawangarri Aboriginal Corporation director told AAP.

“We always say it’s national parks and the growth of our tourism enterprise that is going to really strengthen our ability to protect the river … there’s a high level of protection against extractive-type industries.

“We’ve got pretty spectacular country. We cross over the (Wunaamin Miliwundi) ranges, we’ve got gorges and wildlife and birdlife and everything that a tourist would want to come and see.

“Our strengths are in a tourism-based economy.”

About 18.5 per cent of the state conservation estate is jointly managed with traditional owners across 16 agreements.

This equates to more than five million hectares, covering 46 parks and reserves.

Having access to the department’s resources provides benefits and training opportunities for the Bunuba Rangers, whose work includes biodiversity surveys, bushfire management and weed eradication.

More recently they have been attempting to stop the freshwater crocodiles that live in Danggu Gorge from being poisoned by cane toads.

Working with researchers, they inject nausea-inducing chemicals into cane toad corpses which are presented as baits, conditioning the crocs not to eat the introduced pests.

It’s all part of maintaining the biodiversity of the gorge which also hosts critically endangered freshwater sawfish.

The gorge’s limestone walls were once part of the Devonian Reef and the site still contains fossils dating back 370 million years.

“I reckon it’s one of the best jobs that we get out here in the Kimberley,” ranger Lionel Marr said.

“Going out on country, basically doing what our ancestors used to do and looking after it.

“The partners give us lots of opportunities with training. We just want to tackle the training and get qualified enough and hopefully one day we’ll be running our own show here and sharing our knowledge with the rest of the Bunuba people.”

The extension of the Danggu Geikie Gorge national park to the north will form part of the Fitzroy River National Park, a McGowan government election commitment in 2017 involving three traditional owner groups.

Following the creation of the Warlibirri National Park in partnership with Gooniyandi native title holders earlier this year, the Bunuba portion is expected to be completed by mid-2023.

A third Indigenous land use agreement is being negotiated with the Yurriyangem Taam native title group over the upper reaches of the Fitzroy River, a state government spokesperson said.

Where that leaves parts of the river further south remains to be seen.

“I feel for the traditional owners south of us, and I sometimes suspect there’s this unwritten green line that’s a little bit south of Fitzroy Crossing,” Mr Ross said.

“Anything north of the green line, you don’t have a problem talking about environment and protection of the river but anything south of that line falls into (a separate category).”

A proposal by the Harris family-owned Gogo Station to extract up to 50GL of surface water per year for irrigated agriculture east of Fitzroy Crossing remains before the Environmental Protection Authority.

Hancock Prospecting did not respond when asked whether it still intended to pursue the proposal.

The McGowan government said it is committed to protecting the river’s cultural and environmental values “while still allowing opportunities for sustainable economic development at a small scale”.

“The water allocation plan will be built on scientific evidence and guided by community and cultural values to provide a strong and transparent foundation for water resource management of the catchment,” a spokesperson said.

Mr Garstone is hopeful a proposed world heritage listing for the West Kimberley will bolster the river’s protection.

He remains skeptical that proposed irrigation developments would create jobs on any large scale for local Indigenous people.

But he believes a conversation is needed about access to groundwater from which traditional owners could derive financial benefits.

Previous attempts at large-scale water extraction have failed to materialise.

Texan entrepreneur Jack Fletcher sought to dam the river as part of an ambitious plan to develop a food bowl on irrigated land.

The scheme was abandoned when a massive flood in 1983 washed away critical infrastructure.

Environmentalists stared down plans at the turn of the century to build three dams on the Martuwarra for the cultivation of genetically modified cotton.

And before he became premier, Colin Barnett led the Liberals to defeat in the 2005 election after controversially pledging to build a 3700km waterway from the Fitzroy River to Perth.

“They talk about them and pursue them but actually turning them into reality is another thing,” Mr Ross said.

“People suddenly realise the enormity of what they’re trying to propose.

“It’s been proven before, where premiers have gone off and tried to build canals and dams and they’ve been thrown out of government on that basis.

“The more people that visit our country here, (the more) champions for our cause.”

This AAP article was made possible by support from the Meta Australian News Fund and The Walkley Foundation.