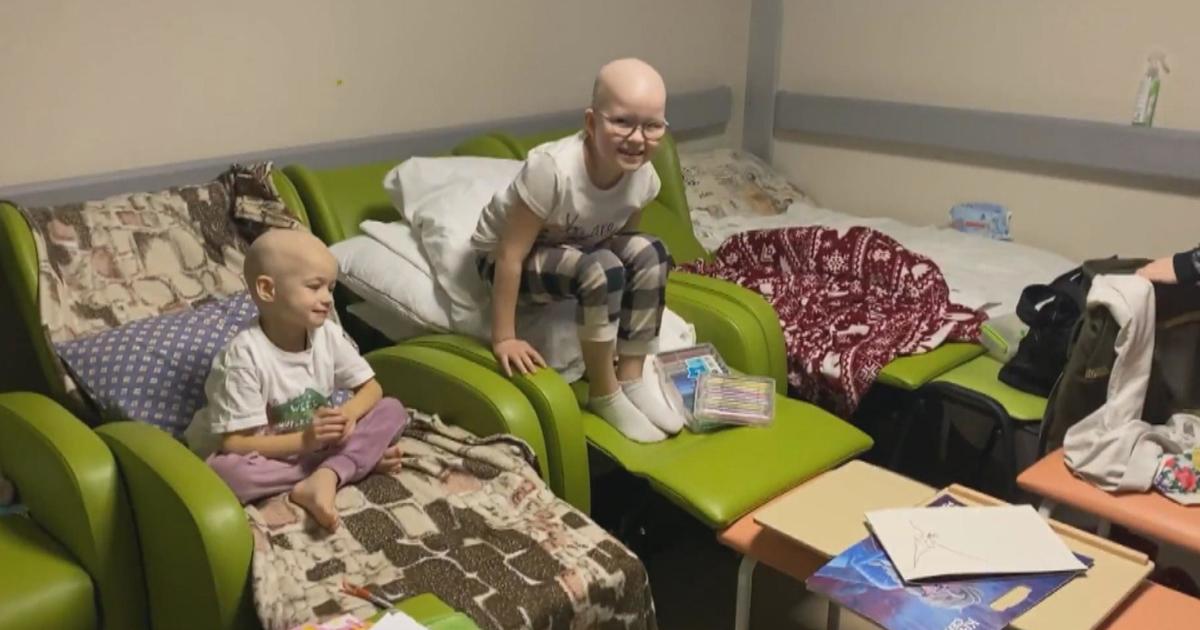 Two-year-old Zhenya has already been through a lot in her young life. Diagnosed as an infant with neuroblastoma of her spine, she began treatment at six months old. Because her tumor is located on a cluster of nerve endings, she is unable to move her legs or stand up on her feet, so when she wants to pick blueberries in her hometown of Zhytomyr, a city west of Kyiv, Ukraine, she needs her mother to lift her.

Her treatment has been intense. Zhenya’s small body has already undergone six rounds of chemotherapy and 28 rounds of radiotherapy. She now awaits surgery to remove the spinal tumor, which might give her a fighting chance at walking.

But she has been waiting for more than a year for the operation — Russia’s war in her country keeps delaying it.

Shortly after Russia’s attacks began last February, Ukraine’s first lady, Olena Zelenska, helped organize a mass evacuation to send children with cancer to other countries. She called it the “convoy of life.” But some sick children, like Zhenya, have remained at home, fighting their disease while the country around them battles for its own future.

Zhenya’s mother, Tetyana Yarova, told 60 Minutes she was worried about continuing her daughter’s medical treatment in Ukraine. But when the war broke out, Zhenya was taking chemo pills, which doctors said could be taken from home. So, the family stayed.

“My husband is in the military,” Yarova explained. “We live in an area where hopefully it shouldn’t be dangerous. But we have a bag, a suitcase packed with all our documents and all necessary things ready, in case we need to leave. We have a place to go to abroad. But we believe in our victory. We only want to live in Ukraine.”

Marharyta Harmash also decided to keep her family in Ukraine. Her son, Ivan, is fighting leukemia. Although she felt scared to stay, she said she wanted her son to continue his treatment because he is almost finished with it.

“I didn’t want to leave because everything is dear to us here,” Harmash said. “Our doctors are here.”

When the war began in February, the family first moved into a basement bomb shelter. There was no heat, so Ivan had to sleep in a winter hat and coat, with two blankets layered on top of him. Although he wore a mask, the unsterile environment was too great a risk to his health because his chemotherapy treatments had weakened his immune system.

The family then moved into the basement of Ohmatdyt Children’s Hospital, Ukraine’s largest children’s hospital, along with dozens of other children who were too sick to leave. Although the conditions in the hospital were much better for her son, Harmash acknowledges the impact the war has had on her son’s health.

Katya Mariuk also stayed in her home country. The teen is currently in remission from Hodgkin’s lymphoma, having been first diagnosed at the age of eight. Having since gone into remission and relapsed two previous times, she now lives with permanent organ damage from the rounds of chemotherapy she has endured. Though her health is a constant concern, she said she chose to stay in Ukraine for a few reasons.

“First of all, because we would have to leave our dad behind because he wouldn’t be allowed to leave the country, and we didn’t want to get separated. We wanted to be all together,” Mariuk said. “Also, when you go abroad, you don’t know anyone there. You don’t speak their language, and it’s very stressful, too.”

For the families of sick children who joined the “convoy of life” and chose to leave Ukraine, 21 countries have welcomed them in, including Poland, France, and the U.S. By a recent count 1,119 children have been evacuated in total. Those who came to the U.S. are being treated at St. Jude Children’s Research Hospital in Memphis.

Meanwhile, in Ukraine, Russia has assaulted hospitals and clinics 630 times, according to the United Nations. Russia has devastated Ukraine’s power grid, frequently plunging the country into the dark. At Ohmatdyt Children’s Hospital, where 60 Minutes met all the families who stayed behind, surgeries have had to be illuminated by generators.

For now, Zhenya will have to wait a little longer for her operation.

Still, Zhenya’s mother said she maintains hope, both for her daughter — and for her country.

The video above was produced by Brit McCandless Farmer, Will Croxton and Kristin Steve. It was edited by Will Croxton.