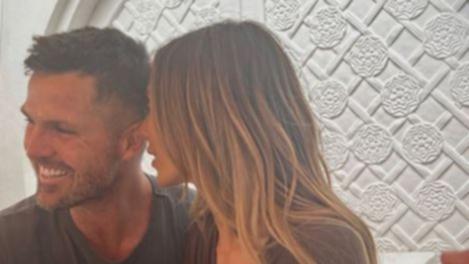 After months of speculation around their relationship status, Nadia Bartel has finally gone Insta official with her boyfriend, Peter Dugmore.

The influencer and former WAG was first linked to the former footballer turned model in January, when they were spotted in Melbourne, and again in April.

But their romance has gone relatively under the radar until now.

On Sunday Bartel shared a snap on her Instagram Stories cosying up to her new man during a beachside getaway with friends.

She was pictured in a grown cut-out knit dress whispering in Dugmore’s ear.

It was also reported that Dugmore tagged along on Bartel’s luxury European holiday in August.

It comes one year after the 37-year-old was embroiled in the white powder scandal, and three years after her split from Geelong star and Brownlow medallist Jimmy Bartel.

In September last year, the mum-of-two faced major backlash and even had sponsors cut deals after she made headlines for snorting a white powder off a plate and partying with her friends during Melbourne’s harsh COVID lockdown.

She was roasted for her actions and those involved were fined $5452 each for the breach of the public health order.

Bartel — who shares children Aston and Henley with her ex-husband — has kept her romantic life private since her divorce, though she was previously linked to Nathan Brodie in 2020.

Bartel and Brodie’s romance was outed when Brodie shared a snap of the fashion designer relaxing back at St Kilda beach.