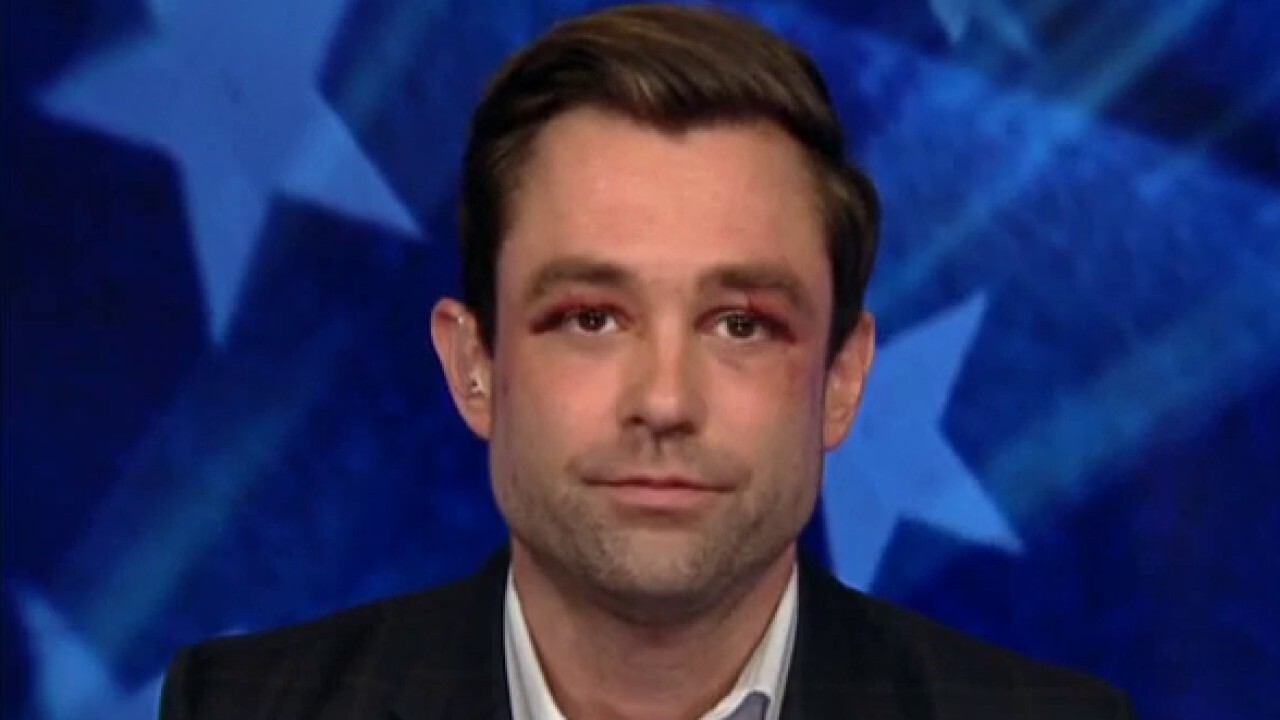 Fox News meteorologist Adam Klotz was brutally beaten on the New York City subway by a group of teens after he intervened on behalf of an elderly man whose hair they lit on fire. But he’s not focused on potentially filing charges against the teens.

Klotz said that while he was advised to pursue charges against the teens who assaulted him, he told Fox News Monday he wants Mayor Eric Adams “to do something more long term so that this won’t happen to somebody else, more than me just getting some sort of revenge in the short term.”

Klotz was riding the No. 1 train on his way home after watching the Giants-Eagles NFL playoff game at a Manhattan bar past midnight on Saturday when he noticed a group of teens harassing an “older gentleman,” before setting his hair on fire with a joint, he recalled in an interview on “Tucker Carlson Tonight” Monday.

“His entire head was on fire. And I was sitting right there watching it and how can you not [say] ‘Woah guys, you can’t do that,” Klotz said. “They just didn’t want to be told what they could not do, so suddenly the focus was on me.”

FILE – A video surveillance camera hangs from the ceiling above a subway platform, Wednesday, Oct. 7, 2020 in the Brooklyn borough of New York.
((AP Photo/Mark Lennihan, File))

As the group of seven teens verbally taunted him, Klotz exited the subway car, hoping to put the interaction to rest. But the group followed him, “kicking and beating” him to the ground.

“I actually moved to whole ‘nother car on the train at a stop. We go a whole stop. The doors open, I kind of think it’s over,” Klotz said. “The whole group comes and gang rushes me and jumps on me, just starts beating me and kicking me. I hear ‘put him to sleep, put him to sleep.’ They wanted to knock me out. My goal at that point was just to cover my head because once you are unconscious. Who knows what will happen? But I got kicked up and down the side and stomped on.”

Klotz, who had visible bruises above his eyes in the televised interview, told “Fox & Friends” earlier Monday that he suffers from severe brushing on his side and that he struggles to bend his knee. He was treated at a local hospital after the assault.

Three of the teen suspects were stopped by police in connection with the attack, but they were released to their parents without facing charges.

Fox News meteorologist Adam Klotz reveals bruises after he was brutally beaten on the subway over the weekend.
(Screenshot: Adam Klotz – Instagram)

“Juvenile reports were prepared, and their parents were called to pick them up,” a rep for the NYPD told The New York Post.

Klotz called on New York City Mayor Eric Adams to ramp up policing in the transit system to protect riders from subway violence.

“I want there to be something done… why is the weather guy on the train trying to stop crime in the middle of the night? Like, where is Eric Adams? Where’s the city? Why am I doing this? Why is it up to me?” he said earlier Monday.

“What I want is some sort of change. I don’t want this to happen to somebody else, and I don’t think necessarily just these kids getting in trouble, like, where’s the structural things? Like, put some cops down there,” Klotz continued.

Since 2020, there have been roughly 21 killings in the subway system, the New York Post reported. The figure is more than the 20 murders recorded between 2008 and 2019 combined, according to the data.

In October, a good Samaritan was stabbed on the No. 6 train just ahead of 6 a.m. Wednesday at the Brooklyn Bridge-City Hall. The 31-year-old man was trying to break up a fight between two women when one of the women reportedly stabbed him in the neck, shoulder and arm.

Adams at the time was criticized for downplaying the attack, arguing that most New Yorkers use the system without issue.

“We’re going to deal with those crimes that take place, and we’re going to continue to work on those six felony crimes a day that we’re witnessing,” he said, per the New York Post.

“But,” he added, “I know that 3.5 million people use our system every day without any encounter.”

Yael Halon is a reporter for Fox News Digital. Story tips can be sent to yael.halon@fox.com.