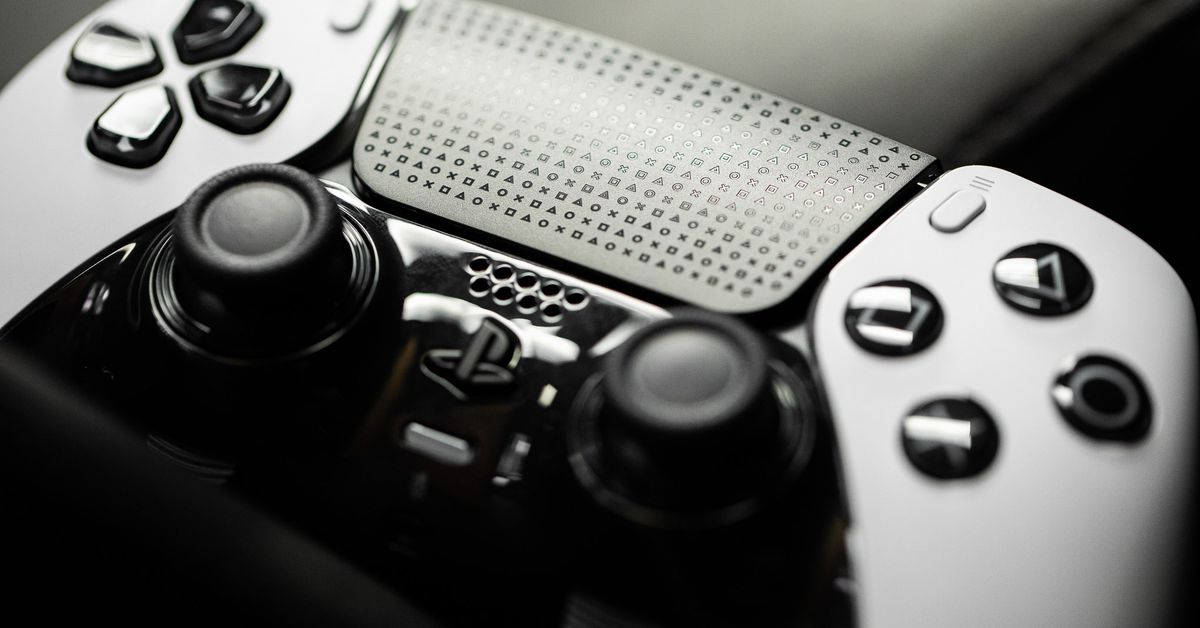 How do you build a better controller than the best gamepad that’s come along in years? Sony’s strategy with the DualSense Edge — arriving January 26th for $199.99 — was familiarity. Instead of changing how buttons feel or where they’re located, Sony’s designers took an entirely additive approach, making a highly configurable version of its original PS5 controller that does more while feeling practically identical.

The Edge is the same size, the same shape, and has the same buttons and joysticks as far as my fingers can tell. Only now, you get two kinds of rear paddles, adjustable hair triggers, swappable stick tops (including the classic PlayStation domes), the ability to remap almost every button on the controller and adjust joystick sensitivity curves, new dedicated function keys to hot-switch profiles, and — get this — toolless quick-swap stick modules so you can replace a broken joystick in 30 seconds flat.

I spent two hours at PlayStation’s US headquarters trying all of the above, and unless there are hidden flaws or the battery runs out mid-session, I’m pretty sure this will be the best PS5 controller you can buy for $200.

Let’s go down the features one by one. I’ll tell you what I liked — and where I still want more.

In case you missed my story in February 2021, I’ll catch you up: every Sony DualSense controller is covered in 40,000 tiny PlayStation symbols. They’re what you feel when you hold a PS5 gamepad, and here, they feel even better because the ones under your fingertips are made to be grippier. The triggers are now stippled with the PlayStation symbols for added purchase, the touchpad’s dappled with them, too, and — like competitors in this price tier — the inside grips are rubber instead of plastic.

I don’t think the DualSense Edge actually looks better than the original because I prefer the original white buttons, and I’m not a fan of the new glossy, fingerprint-magnet plate atop the analog sticks. But it immediately feels better, and that means way more to me.

Kudos to Vjeran for capturing the symbols in these photos — I certainly wouldn’t have been able to do them justice on my own.

Whether you loved or hated the DualSense’s buttons and joysticks, you should know they largely haven’t changed mechanically. I brought along my PS5 launch controller from home and Sony provided another, and the only discernible difference I could feel with the DualSense Edge was that the sound of pressing a button was slightly deadened. Perhaps they’re more precise, but I couldn’t tell in my demos.

What jazzed me, though, is that you can now rip off the caps of your joysticks to swap in an old-school convex dome instead, just like the sticks that shipped with your PS3, PS2, and later PS1s. The Edge comes with four of them at two different heights, though I’m sure I’d only use one — I’m totally going to run a Frankenstein setup with one convex cap and one concave one for comfy movement and precision aiming at the same time.

The triggers, of course, now have three setpoints — and I quickly found myself enjoying hair triggers in Call of Duty, where time to trigger is obviously critical. While setting the trigger for a shorter throw does disable Sony’s awesome “adaptive trigger” feature that uses tiny motors and a worm drive to generate a real sense of tension and resistance, you can easily get it back by setting the triggers to a full throw again. It’s your choice.

Plus, you can program both trigger’s endzones to however many degrees you like if you want faster response without changing their physical profile.

The paddles are brand new for Sony, but if you’ve ever touched an Xbox Elite controller, you probably know what they’re like — nice, rigid, cool to the touch scoops of metal that rest under your fingers, which can easily be dropped into the back of your gamepad or yanked if you’re worried they’ll get in the way. You also get a pair of little half-dome paddles that definitely stay out of your way at the risk of requiring you to reach for them (or rest your middle fingers on them) when it’s time to duck, roll, jump, or whatever else you map there.

When it comes to those joysticks, I’m really impressed with how truly easy they are to swap. It does take a small amount of fingernail to reach the recessed sliding button to pop off the cover, but then it’s just a flick of a metal lever and the joystick module pulls right out. It’s incredible to think you’ll be able to fix a broken or drifting stick for $20 by buying a new module at retail, no shipping required, and there’s space in the case to carry an extra, too.

Me, I wish Sony had chosen Hall Effect sensor joysticks to begin with so drift will never be a problem. (The Sega Dreamcast had them 23 years ago.) Alas, Sony tells me you’re still getting potentiometer-based joysticks here, and it wouldn’t even begin to talk about the possibility of additional parts for the Edge. I’d like to see Hall Effect modules and some different stick tops, too.

You can map almost every button on this controller to any other button — save the touchpad and system keys like PlayStation and Share, all of which you can at least turn off to avoid any butterfingers incidents. You can even disable the start / options button and put it on, say, a meaty press of your right analog stick to avoid accidentally evoking a game menu. And, you can adjust the entire response curve of your joysticks, and set their inner deadzone, plus lower your controller’s haptic feedback if it’s throwing you off your game.

Why deviate from the norm? Any number of reasons, and Sony makes it easy to experiment for yourself by letting you jump from a game directly into controller profile programming and immediately back again, and you can instantly swap back to default controls anytime you want. When I let chaos prevail by swapping my D-pad and face buttons, that came in real handy.

Swapping profiles is as easy as holding down either of the two new Function keys beneath the analog sticks and then tapping a face button. You can have three custom profiles saved to the controller at a time, plus the default PlayStation controls, each mapped to one of the controller’s Cross-Square-Triangle-Circle face buttons for easy access. There’s even a simple LED pattern beneath the touchpad to help you know which profile you’re on, though its simple 1-4 dot readout probably isn’t a good enough memory aid for me.

I decided I wanted a slow-moving sniper profile and a quick-response shotgun one in Modern Warfare II, but I didn’t need to pause my game to switch: Fn + Square and Fn + X let me hot-swap between them so I could change my playstyle as soon as I picked a different weapon up off the ground.

You can save a total of 30 different profiles on your console, but you don’t need to leave them there — Sony imagines you could take the DualSense Edge to a tournament, plug it in with your bundled USB cable, and have your three saved profiles ready to go in the controller’s internal memory.

And Sony confirms to me that you can take them to PC, too — as long the game and / or game platform support them, which might take a little work since it isn’t exactly the same as a DualSense. “Existing PC games that support the DualSense wireless controller today can also support the DualSense Edge wireless controller through a developer-implemented update. Please stay tuned for more information as we are working with our development partners,” reads part of a statement via PlayStation spokesperson Ken Zhang.

As customizable as it is, I feel like Sony’s just scratching the surface here. Maybe I’ve been spoiled by the Steam Deck, but for me, a fully customizable controller is one that lets you map multiple buttons to each button, lets you set turbo buttons, program multistep macros, and add gyroscopic aiming to any game. The Steam Deck is my favorite place to play Genshin Impact now, streaming from my PS5, because bows are so much easier to aim when you have a gyro on your side.

The DualSense Edge may cost $200, but you’re not just getting the gamepad. Not only do you get the aforementioned four metal paddles and four convex analog stick tops but also it comes with a 2.8-meter (around 9-foot) braided USB-C to USB-A cable, a clever locking adapter that keeps that cable securely attached to the gamepad (we yanked it, it’s firm), and what feels like a quality hardshell case with strong zips. It feels like a piece of luggage, only PlayStation-themed.

The case also has a big Velcro passthrough window at the top so you can charge the controller without unzipping it, and there’s even a spot for an analog stick module if you want to carry an extra one in case of breakage. You’ll have to buy one yourself for $20, though, as it’s not included in the package.

While the controller doesn’t come with its own charging dock, you should know it’s got the same copper contacts on the bottom to easily slide it into the same official Sony charger you might be using with your DualSense, and it’s got the same 3.5mm jack should you want to plug in a headset. In fact, it’s easier to use a headset than ever: hold down on the new Function keys, and you can easily raise and lower headset volume without ever diving into a menu.

Other than, you know, durability, there’s just one big question on my mind about the DualSense Edge, but it’s one that’ll have to wait for a review — I didn’t get time to test the battery life, and I worry because Sony isn’t willing to talk numbers at all.

The company is only saying it will have “moderately shorter” battery life than the original DualSense. Here’s Sony’s full statement on that, via spokesperson Zhang:

The DualSense Edge wireless controller’s operating time is moderately shorter than the original DualSense wireless controller because we’ve included many more features within the same form factor and ergonomic design as the original DualSense controller. We wanted to strike a good balance between wireless operating time and delivering robust, high-performance features. Additionally, the longer USB braided cable is also great for competitive players who prefer playing with a wired connection to avoid wireless interference – this option preserves battery life.

We’ll hopefully be able to give you answers there in a full review. Anything else you’d like to know? Hit me up in the comments, and we’ll do our best once we’ve got one at home.