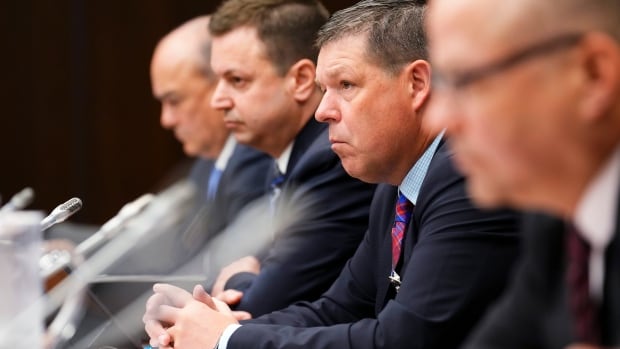 Hockey Canada used players’ registration fees to pay for $2.9 million in settlements this fiscal year — including one related to a high-profile sexual assault allegation against members of the 2018 World Juniors team — according to newly released financial records.

The new financial statements confirm that the controversial National Equity Fund was used to pay out all of the settlements this fiscal year.

The only money going into the fund comes from players’ registration fees, the records show.

“During the past year, the Organization has come under extreme public and media scrutiny with regards to its management and governance of litigation settlements and the use of player registration fees,” wrote BDO Canada, the company conducting the audit.

“… The organization is susceptible to lawsuits from various sources. As a result of this risk, the Organization has obtained insurance coverage which is supplemental by holding funds in reserve to cover uninsured claims.”

Hockey Canada has been embroiled in controversy since May, when it reached a settlement with a young woman who filed a $3.5 million lawsuit alleging a group of eight Canadian Hockey League players sexually assaulted her in 2018 in a hotel room in London, Ontario.

Hockey parents were outraged to learn that their registration fees were going into the National Equity Fund without their knowledge — and that the reserve fund was used to pay out millions of dollars in sexual abuse claims over the years.

Hockey Canada told MPs that it used the National Equity Fund to settle the London case, the board of directors “approved the maximum amount of the settlement, and the settlement offer was made and accepted.”

The new audited financial statements suggest the settlement in that case was less than $3.5 million.

CEO Scott Smith terminated ‘without cause’

Smith and the entire board of directors announced they were stepping down after a report commissioned by the organization found serious problems with accountability and transparency.

The financial statements show that, for the first time, Hockey Canada has had to include a previously undisclosed fund — the Participants Legacy Trust Fund — in its audited financial report, which showed its balance was $7.5 million as of June.

Hockey Canada’s auditors stated on the front page of the financial statement that the fund “was not disclosed in the prior year.”

The Legacy Trust Fund only came to light in the fall when the Globe and Mail learned of its existence through court documents. The newspaper revealed the fund was created in 1999 and the hockey organization was using player registration fees to build another large financial reserve which could be used to pay out for sexual abuse allegations and other claims.

During a Commons committee appearance in October, Hockey Canada’s now former board chair Andrea Skinner told MPs that the Legacy Trust Fund had been “fundamentally mis-described in the media” and was not used to settle claims. Skinner said the fund “is not a Hockey Canada asset” and that’s why “it doesn’t show up on Hockey Canada’s financials.”

But once the organization made the auditor aware of the fund this year, the auditor determined it should be on the books because Hockey Canada controls it.

“The Trustees of the Legacy Trust are appointed and terminated by the Organization,” wrote BDO Canada.

The fund is meant to respond to claims dated prior to September 1995 associated with some of Hockey Canada’s member branches and the Canadian Hockey League, in the event the National Equity Fund doesn’t have enough money, the financial statements said.

‘It sets the record straight’

Kate Bahen, managing director of Charity Intelligence Canada, reviewed the latest audited financial statements and past statements dating back to 2008.

“It goes to show the previous management wasn’t forthcoming with information,” said Bahen.

“It sets the record straight. Hockey Canada’s previous management stated it was not part of its books and the auditors said yes, it is part of your books by virtue of control.”

Before that, Hockey Canada did not post its audited financial statements online. The only way to obtain them was by filing requests under the Access to Information Act.

Bahen continues to call on the federal government to require not-for-profits like Hockey Canada that receive millions in federal funding and tax breaks to post their audited financial statements online.