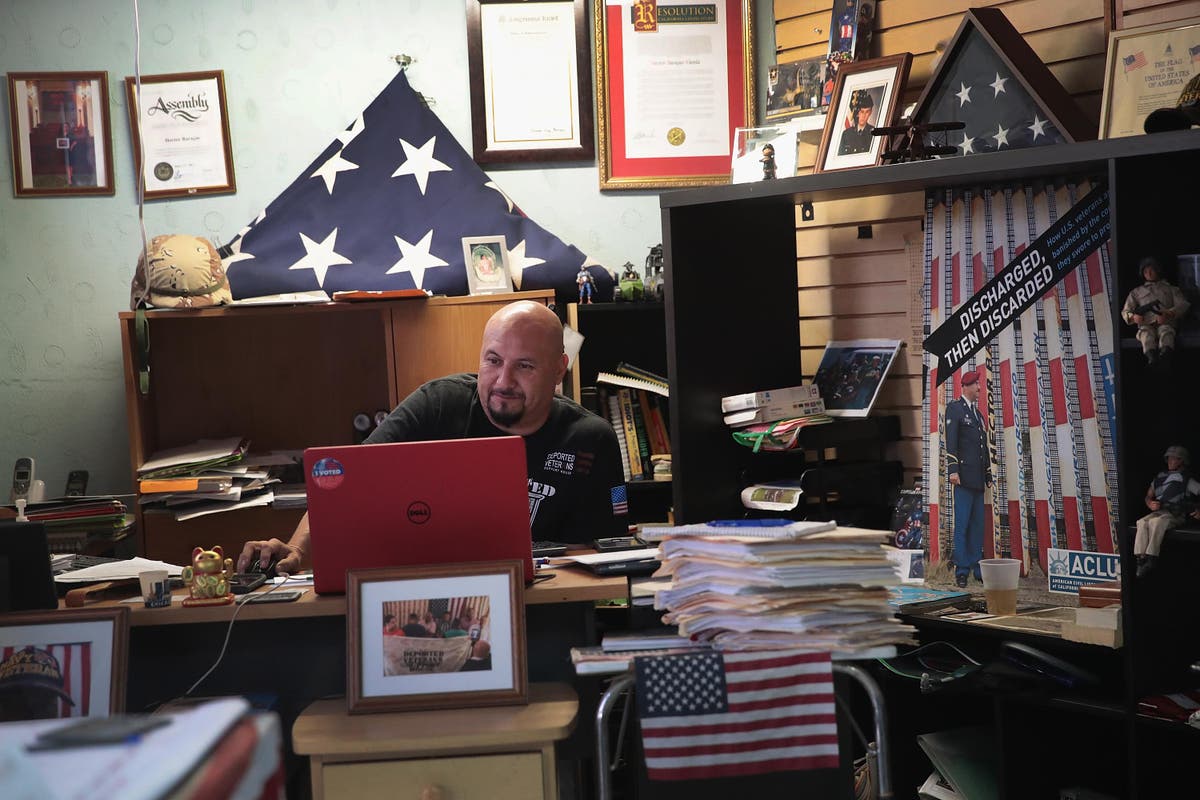 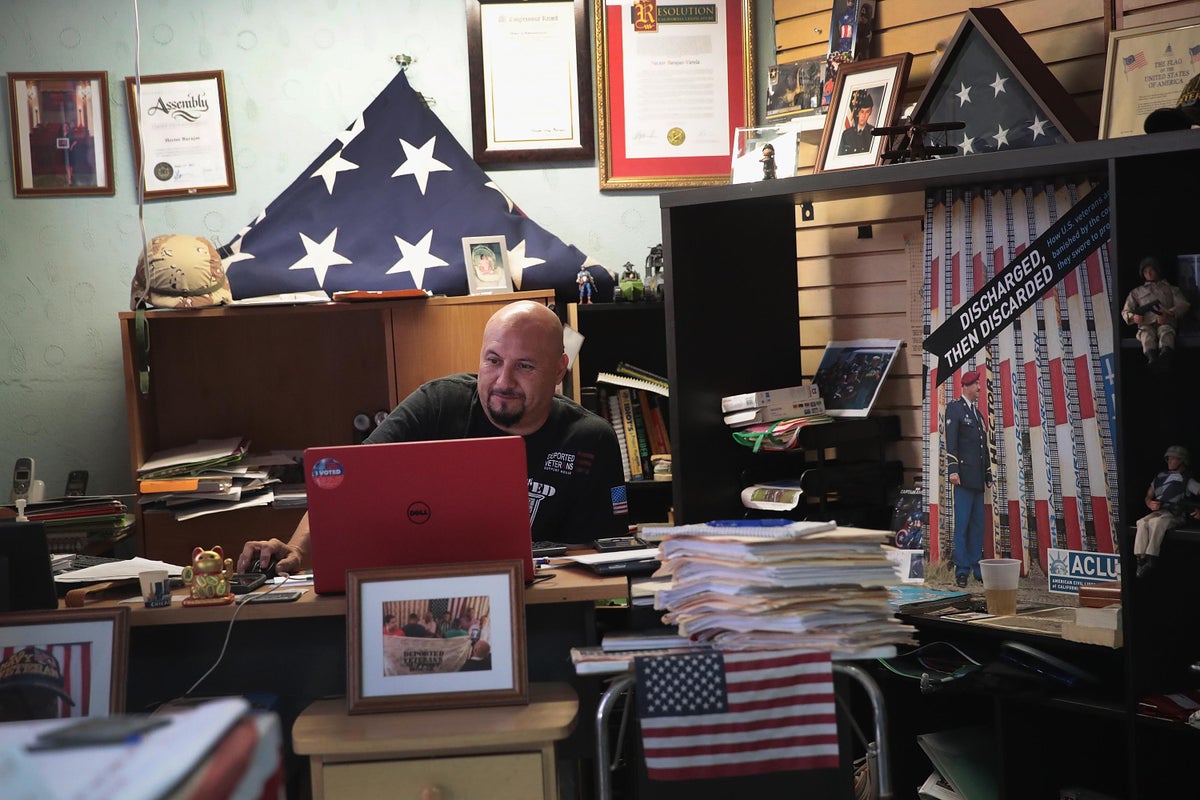 For Hector Barajas, it was a long and winding journey to become a full US citizen. Even a stint in the military didn’t seem to promise any guarantees. He came to the US with his family at the age of 7 from Zacatecas, Mexico, and was a US permanent resident. As a teenager, he joined the Army as soon as he could, seeking new opportunities.

“I wanted to be a GI Joe, but also I wanted to serve my country,” he tells The Independent. “I wanted to get away from the environment I was growing up in. Compton, California, was pretty heavy back in the 1990s.”

After six years as a paratrooper, Mr Barajas was discharged. He struggled with drugs and alcohol, soon finding himself in prison. At the end of his sentence, in 2004, he found out he was being deported.

“When you’re in that van, I was just like man, what am I going to do?” he remembers, adding, “Mexico, is not my home. I like to visit, but it wasn’t somewhere where I wanted to live. Everything I know is in the US.”

The government doesn’t keep reliable statistics on the matter, but Mr Barajas is one of an estimated 94,000 US military veterans who have been deported, leaving them with little options to return to their adopted home country. For Mr Barajas, who now works as an activist supporting fellow deported veterans at Tijuana’s Deported Veterans Support House, that meant sneaking back to the US, getting deported again in 2009, and finally receiving citizenship in 2018 once then-governor of California Jerry Brown pardoned him.

In a sense, he’s one of the luckier ones. Many veterans who are deported are often struggling with mental health and substance abuse challenges, arriving in countries that can be far away from their family or totally unknown. However, the Biden administration is slowly showing support to this community. Congress is considering legislation that would help bring thousands of America’s veterans back home to the country they took an oath to defend.

Non-US citizens have fought on behalf of America in virtually every conflict from the Revolutionary War onward, and there are currently an estimated 45,000 immigrants serving in the military. It’s not necessarily common knowledge, but only lawful permanent residence is needed to join the US armed forces. That lack of knowledge extends to the servicemembers themselves. Many have been led to believe joining amounts to becoming a US citizen.

“It is a very common misconception amongst our compatriots that veterans cannot be deported. Most people don’t know that,” Amanda Schuft, legal services director at Immigrant Defenders Law Center, tells The Independent. “They have to take an oath. It’s very very similar to the oath you have to take after the application is approved that actually makes you a citizen.”

It is possible to apply for citizenship while serving in the military, but the armed forces don’t always ensure soldiers are educated on this option.

“In the military, you jump all over the place,” Mr Barajas tells The Independent. “Some guys have missed their letters of when they had to go to their citizenship hearings. We have the capability to do that, to follow you throughout your service so that you become a US citizen. Some guys don’t even have the time to do that because they were shipped off to Vietnam or Afghanistan. You get so caught up in trying to survive or trying to do your work, you don’t take care of it.”

Fighting in US wars is no guarantee of protection from deportation. Under the Immigration and Nationality Act, lawful permanent residents can be deported, regardless of their veteran status. In 1996, the Clinton administration made this process even easier through the Illegal Reform and Immigrant Responsibility Act, which drastically lowered the bars for removal.

Anyone convicted of a number of low-level misdemeanors, non-violent offenses, and substance possession crimes could now be deported.

“Before that law was passed, the US had never deported a military veteran,” John Valadez, the director of the documentary American Exileabout deported veterans, told PBS last year. “Foreign nationals have served in the military since the Revolutionary War, they had a special status and we gave them a lot of slack because of their services. Deporting veterans goes contrary to our traditions.”

Such rules hit the veteran community hard because many soldiers, especially in earlier eras in US policy, were returning from war with unaddressed mental health and substance issues. This meant their making contact with the police more likely.

“Think about the lack of mental health services available in this country,” Ms Schuft, the immigration attorney, says. “Go back 20 years or 30 years to after the Gulf War. Go back however many years, right after the Vietnam War. So what do people do? Self medicate.”

Things get even more difficult once veterans are deported. Though they’re still entitled to military benefits, they often have no way of accessing critical care around mental health or physical injuries in their new homes. Other times, deportable offenses can render someone ineligible to apply for US citizenship.

In 2020, the ACLU won a lawsuit against the Trump administration for blocking servicemembers from obtaining expedited citizenship, a process which the American Legion veterans organisation estimates has allowed over 750,000 people to gain citizenship over the last 100 years.

The following year, the Biden administration launched the Immigrant Military Members and Veterans Initiative, with a goal of supporting migrant veterans through citizenship proceedings as well as offering other services like Covid clinics at US ports of entry.

“It’s our responsibility to serve all veterans as well as they have served us – no matter who they are, where they are from, or the status of their citizenship,” Secretary of Veterans Affairs Denis McDonough said at the time. “Keeping that promise means ensuring that noncitizen servicemembers, veterans and their families are guaranteed a place in the country they swore an oath – and in many cases fought – to defend. We at VA are proud to work alongside DHS as to make that happen.”

In February of this year, the initiative unveiled a Department of Homeland Security portal for veterans to apply for legal status in the US.

In June, the Biden administration went a step further, with the Immigration and Customs Enforcement agency declaring it will affirmatively consider military service as a discretionary, “significant mitigating factor” that weighs against deportation in immigration proceedings.

“ICE values the incredible contributions of noncitizens who have served in the U.S. military,” ICE acting Director Tae Johnson said in the statement at the time.

Though none of these policies amount to an underlying, permanent change to immigration law.

“The thing that worries me is that it changes from administration to administration,”  Ramon Castro, a Marine veteran and member of the Brawley City Council, told Voice of San Diego this summer. “So the very next president could, in fact, change that policy.”

In early December, a law passed the House of Representatives that could make this new attitude towards deported veterans a lasting one.

The Veteran Service Recognition Act directs DHS and the Department of Defense to implement a programme allowing non-citizen servicemembers to file for naturalisation as soon as possible during their service, as well as create a military family immigration advisory committee that weighs in on deportation proceedings.

It would also offer those already deported and not convicted of serious crimes a chance to reapply for permanent residency status.

Mr Barajas is fired up about the growing energy behind a cause he has championed for years.

“That’s a pretty big win. I’m excited,” he tells The Independent of the House bill. “Nobody was really lighting for this cause…Some people don’t even know that we have immigrants in the military.”

The thousands of deported veterans around the world will likely have to wait a little longer before the bill passes though.

As the congressional calendar winds to a close, legislators only have a few more days to pass the bill through the Senate for it to become law. Otherwise, the initiative will become another twist on the circuitous journey America’s migrant veterans face to be settled again in the country they once served.