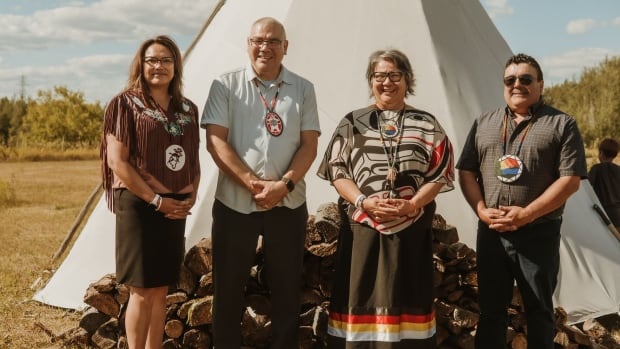 Taykwa Tagamou Nation Chief Bruce Archibald still remembers how it felt to be taken away from his home as a toddler and sent to live with another family that didn’t practice his Cree traditions.

Archibald was two years old when he was placed with a French-speaking family.

Today, Archibald is using that experience as motivation to keep Indigenous kids rooted in their culture.

Taykwa Tagamou Nation, located roughly 126 km northeast of Timmins, Ont., passed a child “well-being” law back in the fall to take control of a child welfare system that has had a disproportionate impact on its children for decades.

“It was an opportunity for us to try and fix those wrongs that were done and that were forced upon us,” Archibald said.

The community is affirming its jurisdiction through Bill C-92, federal legislation that acknowledges Indigenous communities have the right to create their own child and family policies and laws.

Under C-92, five Indigenous governing bodies have so far asserted their control over their child and family services, according to Indigenous Services Canada.

They include Wabaseemoong Independent Nations in Ontario, Cowessess First Nation in Saskatchewan, Peguis First Nation in Manitoba, the Louis Bull Tribe in Alberta and the Inuvialuit Regional Corporation in the Northwest Territories.

A sixth community, Atikamekw Opitciwan in Quebec, also introduced its own child and family services law but hasn’t been able to implement it yet because it’s caught in the constitutional battle between the province and Canada over Bill C-92, currently before Canada’s highest court.

Quebec argues the law infringes on its constitutional jurisdiction over social services.

For communities like Taykwa Tagamou Nation, Bill-C-92 has cleared a path to finally end the historical overrepresentation of Indigenous children in the foster care system.

First Nations, Inuit and Métis children account for 53.8 per cent of all children in foster care, according to Statistics Canada’s 2021 census.

Taykwa Tagamou Nation’s new child welfare law will stop the practice of sending children to foster care in the south and cutting them off from their families, said Archibald.

Over the past few years, he said, the nation worked hard to change this by creating a “safe home” — a short-term preventative accommodation to support the community’s children and caregivers who require emergency shelter and urgent essentials.

“We made that transition … to make sure that they feel like they’re at home,” Archibald said.

“That’s why we’re doing what we’re doing today, to make sure that our kids don’t feel abandoned.”

Taykwa Tagamou Nation wants to build more safe homes under the new law, which states the community has the inherent right and authority to care for and protect its children, youth and families.

The law, which took two years to develop, focuses on prevention and education.

If a child must be placed in care, the law states agencies must make all reasonable efforts to support family reunification.

“We have to remember not to rush this work,” said Kayla Viau, Taykwa Tagamou Nation’s child well-being law lead.

“People are emotional about these systems and how this is going to impact them … So we’re having to rebuild trust.”

Viau said the goal is to bring healing after generations of children being forcibly removed from their families.

“Trauma continues to play out and it plays out in different ways and we create this re-traumatizing cycle. And so we’re aiming to break that,” Viau said.

Viau said she grew up with the fear of child care workers knocking on her family’s door because prejudice often drove decisions to take children from their families.

“The reason I became a lawyer is because of the injustice I saw,” said Viau, who is Archibald’s daughter.

Indigenous Services Minister Patty Hajdu said the federal government is fully committed to helping communities reduce the number of Indigenous children in care — despite Quebec’s C-92 challenge, which the Supreme Court of Canada is expected to rule on in the new year.

“Communities have that hard work ahead of them, figuring out what’s best for that particular child,” Hajdu said.

One of the challenges facing Taykwa Tagamou Nation, which has about 150 people living on-reserve and 700 on its band list, is an ongoing housing crisis.

The community is short 60 homes for its members.

“That is a major barrier for our families and for reunification,” Viau said.

“There needs to be more urgent action to address that barrier.”