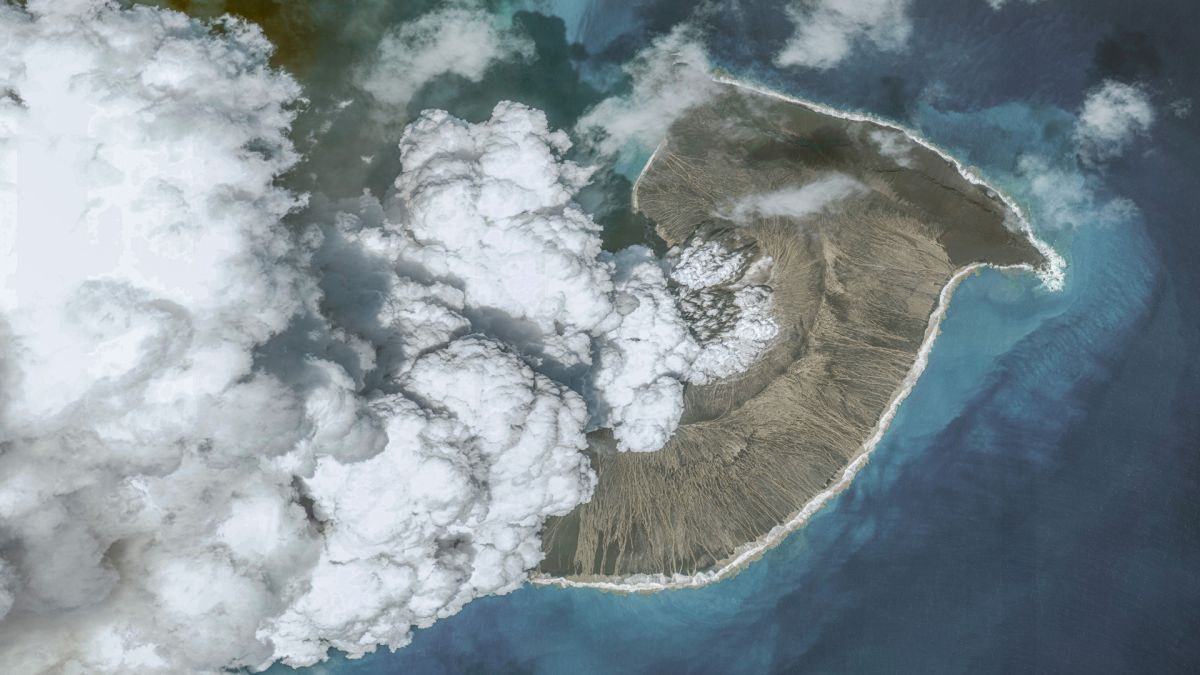 The Hunga Tonga volcanic eruption that stunned the world last January injected so much water into the stratosphere that it will likely make the ozone hole larger in the coming years, scientists believe.

According to reports, the powerful eruption, which was seen from space and detectable by all sorts of sensors around the globe, increased the amount of water in the stratosphere by 10%. The stratosphere is the second-lowest layer of Earth’s atmosphere and is where the ozone layer, which protects the planet from harmful ultraviolet radiation, resides.

Now, that ozone may be at risk because the water emitted by the Hunga Tonga volcano has caused “significant cooling in the stratosphere in southern mid-latitudes,” Paul Newman, the chief scientist for atmospheric science at NASA Goddard Space Flight Center, told Space.com.

Cooler temperatures in the stratosphere speed up the process of ozone degradation, Vincent Henri Peuch, the head of the European Copernicus Atmosphere Monitoring Service, told Space.com. That’s because when the stratosphere is cooler and there is a lot of water present at those altitudes, scientists observe more frequent formation of polar stratospheric clouds, thin eerie clouds floating 9 to 15 miles (15 to 25 kilometers) above Earth. These clouds form during winter months when temperatures in the stratosphere are at their coldest, and provide the right chemical environment for chlorine-based ozone depleting substances, which were banned in 1989 but still linger in the air high above the planet, to destroy ozone.

“During the polar night, there is preprocessing of the chlorinated compounds going on on the polar stratospheric clouds,” Peuch said. “That works throughout the Antarctic winter in July and August, and when the light returns in the polar regions in September, all this preprocessing turns into the ozone destruction that we then see as the ozone hole.”

Once the stratosphere warms up when the Antarctic summer arrives, the ozone hole starts closing and usually disappears by the end of November.

“The material from Hunga Tonga didn’t get into the ozone hole over Antarctica this year, but will certainly get there this coming year,” Newman said. “And just from a simple guesstimate, I would say that the effect will be detectable and that it will be fairly large. Of course, the Antarctic stratosphere varies year to year so there is always a chance that we’ll have an odd stratospheric circulation this coming year and the effect of Hunga Tonga won’t be evident, but I think it will be.”

Scientists, however, are not worried about this temporary increase in the ozone hole’s size. According to the latest assessment by the World Meteorological Organization (opens in new tab) (WMO), the Earth’s protective ozone layer, located at altitudes between 9 and 21 miles (15 and 35 km), is recovering from the depletion caused by chemicals containing chlorine and bromine that had been used in aerosol sprays and refrigerants since the 1950s. Scientists first noticed the weakening of the ozone layer, as well as the gaping hole in it above Antarctica, in the 1970s, and quickly found the culprit. Through the weakened ozone layer, more damaging ultraviolet radiation was reaching Earth‘ surface. Studies estimate that in Australia, the continent most affected by the ozone layer degradation, the incidence of melanoma, a type of skin cancer associated with damage caused by ultraviolet light, rose by 60% between 1982 and 2010.

The use of the offending substances was banned by the Montreal Protocol, which the United Nations signed in 1987. According to the new assessment released Jan. 8, the ozone layer all over the world should mostly heal in the next two decades. It will take a bit longer for the Antarctic ozone hole to close completely, but scientists expect it to disappear by the mid 2060s.

Despite the Montreal Protocol’s success in averting one of humankind’s worst self-inflicted environmental disasters, satellite measurements show that the ozone hole over Antarctica can still reach substantial sizes and last long into the Antarctic summer. According to the European environment monitoring programme Copernicus, the ozone hole in the past three years was surprisingly large and remained open well into December when it usually closes by late November.

According to Peuch, this unusual behavior may be due to fluctuations in the size and strength of the polar vortex, the area of strong cold winds above Earth’s poles. These changes, which might be a consequence of climate change, sometimes lead to cooler than usual conditions in the polar vortex, which then in turn leads to a larger and longer lasting ozone hole. Although the Antarctic ozone hole of 2023 may join its three large and long-lasting predecessors, perhaps with the help of the water vapor from Hunga Tonga, scientists are confident that in the longer term, we will see the ozone hole shrinking.

“We don’t understand exactly what drives this year on year variability,” said Peuch. “It’s like the weather. One year, the stratosphere will be colder than the next year. You have hotter and colder periods, and with that you have different patterns of variability in the size of the ozone hole. It’s still an area of research.”