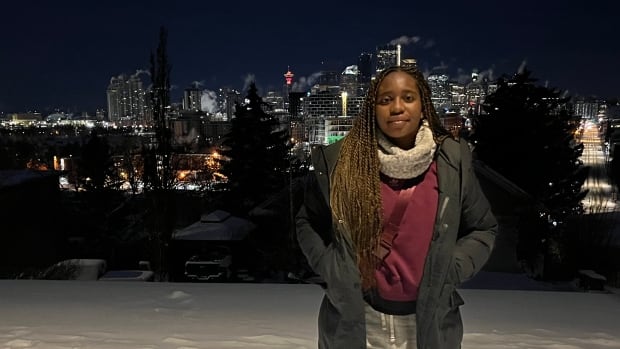 This First Person column is the experience of Adetola Adedipe, who moved to Calgary in 2015. For more information about CBC’s First Person stories, please see the FAQ.

I fell to my knees in the middle of the sidewalk on a cold, Canadian winter night and cried. It was the sky that got to me.

Growing up in South Africa, summers were long, hot and humid. Winters were short and dry with warm afternoons. And best of all you could almost always see the most magnificent starry sky no matter the season.

I would often look up to stargaze and get lost in my dreams. It was my form of meditation.

But when I was 19, I was told by my parents that we were moving to Canada for a “better life and a stronger passport.” I didn’t want to go — to uproot just as I was figuring out who I really was — but I felt I had no choice.

Having a choice in the decision to move might have made a difference — at least mentally. Instead I felt anger and bitterness for being forced to leave the only home I had ever known.

We arrived at the airport and drove straight to the University of Calgary, where I was to stay in the dorms while my family lived in the more affordable city of Regina.

Those first months in Calgary were all about survival. Everyday, I did as I had feared — constantly re-introduced myself, explained where I was from, tried to get people to pronounce my name properly and changed the way I spoke to be heard.

I got lost in conversations about Tim Hortons, ice hockey and high school.

I tried to find people with similar interests to stop feeling so alone. I went to club events — joined a few and dropped a few, including animation, track and field and the board game club.

I was the only Black person in many of the clubs and classes and it showed. Once, a student tried to defend businesses gauging English proficiency in prospective hires based on “ethnic names.” I was the only one to raise my hand to explain why that was an example of systematic oppression.

I wrote poems about my feelings but never shared them. Who would listen anyway?

I laughed, but I told myself I didn’t want to be like them. Why make me like them instead of learning about me? Eat what I like to eat or go to events that I would enjoy?

I was so used to masking my habits and code switching that it became automatic and I began to disassociate from myself. I walked around campus with the mask of another immigrant who finally assimilated.

But I couldn’t shake the numb feeling, like I was a ghost haunting myself.

Until that one night, two years after I arrived, when I was walking back from campus and had the urge to look up. I was horrified. I don’t know if it was because of light pollution or clouds, but there were no stars.

My eyes searched desperately for a source of light that wasn’t a street lamp or a plane. The sky was empty.

At that moment, all the emotions I pushed down flooded back — the pain of leaving my home, of making myself small to satisfy others, of writing my poems that I feared sharing, of being a stranger, the hateful long winters. I couldn’t take it.

I fell to my knees and cried on the street, dragged down by a backpack filled with overpriced textbooks. I was in this place for a better life and yet, I had never been more miserable. I had never felt emptier, unsure of when I would see the skies of my home again. I felt trapped — stuck here with no say in what was the most difficult experience so far in my life.

I lay there until my fingers were numb. I looked up one last time just to be sure and then I finally gave up. My tears froze on my face, and my cheeks went numb. I stood up and kept walking to my dorm room as another homesick poem formed in my mind.

After all, it was November and was only going to get colder.

CBC Calgary is running in-person writing workshops to support community members telling their own stories. That’s part of our ongoing partnership with the Calgary Public Library and in this case, Afros in Tha City. More detail at cbc.ca/tellingyourstory.

We’re also launching a special listening project to make sure young voices are just as much a part of the news as older voices. If you’re between the ages of 16 to 25, would you like to help?