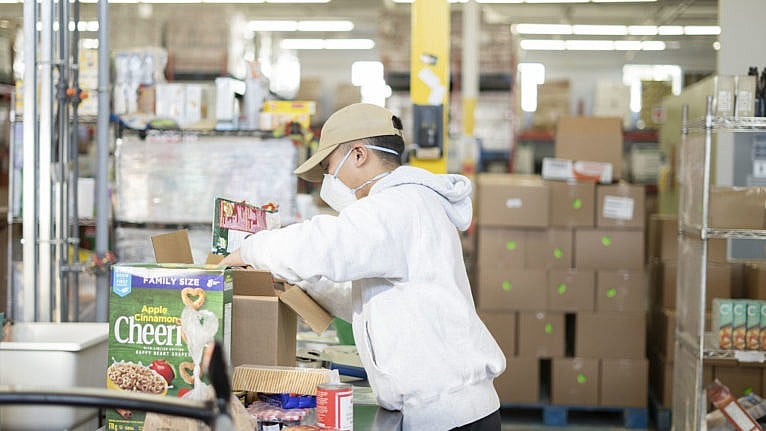 “Clients are telling us they’re considering medically assisted death or suicide because they can’t live in grinding poverty anymore.”

I’ve been working at the Mississauga Food Bank for 13 years. I started as the director of marketing and fund development, and I’m now coming up on five years as CEO. Our work has never been more urgent than it is right now. We’ve seen a 60 per cent increase in demand since the pandemic began. In the past, we were growing proactively, expanding our services to serve more people and reaching out to those living in poverty who didn’t know a food bank was available to support them. That’s very different from how we’ve had to adjust recently.

Throughout the pandemic, the need for food banks steadily increased. We used to serve about 19,000 people per year—now it’s more than 30,000. In October, we had the highest demand on record with more than 11,000 visitors to one of the food banks in our network.

Over the past 12 months, as food prices rose, every month has been a record-breaking one. On average, we’ve seen a 30 per cent increase in new food bank users during the pandemic. Everyday people access our services: about 75 per cent of people who use the food bank have a source of income, whether that’s through employment, social assistance or disability benefits. And this is the first time we’ve had a significant number of people tell us that it’s the cost of food, specifically, that has put them over the edge. A parent of five children who comes to our food bank told us that even when they do have money to shop for their own groceries, they end up leaving half the cart behind because things are too expensive. The weight of bills combined with rising grocery prices is crushing. Like many people living in poverty, this family is stuck in a loop: either they earn enough money to disqualify them for any support when they still need it, or they don’t make enough to cover basic expenses.

In the past, for folks living in poverty, there was still enough room to cut costs in certain places, shuffle things around, and maybe make ends meet. But now that things cost so much more than they used to, people don’t have that little bit to borrow from one pocket to put into another. On average, grocery prices have increased by around 12 per cent—the biggest surge since the early ’80s—and staples have become even more expensive. This year alone, the price of fresh fruit and meat has gone up about 10 per cent. People have no choice but to turn to food banks.

Rising costs also make it harder for us to buy food. We have deals with wholesalers and vendors, but they’re not immune to inflation. We restrict our purchases to high-demand staple items and make substitutions where necessary. For example, we buy turkeys for the holiday season each year—we’re buying the same number of turkeys this year, but spending 20 per cent more than we usually would. We always need milk, and it’s already had two price increases this year. Struggling under the weight of supply-chain issues, vendors are saving their supply to fulfill their contracts at grocery stores, decreasing what’s available to sell to food banks.

Many people don’t know that food banks aren’t entirely government funded. Government grants only account for one to two per cent of our funding: for example, we receive an annual grant of $100,000 from the regional government of Peel. While that might seem like a lot, it only covers 1.6 per cent of our annual operating cost of $6.1 million. During the pandemic, we’ve received more government funding to help us respond to a growing demand for food. We received a grant of $500,000 from the region of Peel last year and we’ll receive that grant again next year. For the most part, however, we rely on donations and fundraising to cover costs. For the fiscal year ending in May, we’ll receive 50 per cent of our funding from individual donations, 20 per cent from companies, 10 per cent from community fundraising events and initiatives, 8 per cent from foundations, and the remaining 12 per cent from elsewhere, including government grants.

The community keeps us afloat, but that support isn’t always where we need it to be. We’ve seen food donations decline over the last few years in addition to an increased demand for food. Prior to the pandemic, we were spending $250,000 a year on food, and now we’re spending up to $1.1 million. We were fortunate to receive incredible donations from the community early in the pandemic. That continues to subsidize our current costs, but we’re not getting enough donations to cover the demand for food right now.

Meanwhile, the government has weakened our social safety net to a disheartening degree. At the provincial level, Ontario Works (our welfare system) and the Ontario Disability Support Program are woefully underfunded. We’re at the point where clients on these programs are telling us they’re considering medically assisted death or suicide because they can’t live in grinding poverty anymore. A client in our Food Bank 2 Home delivery program told one of our staff that they’re considering suicide because they’re so tired of suffering through poverty. Another client asked if we knew how to apply for MAID for the same reasons. We can’t underestimate the effect that poverty has on someone’s mental health. Our clients live with constant worry, and cut corners on needed items like medication, fresh food, or warm clothes—constantly living under that stress takes its toll mentally, emotionally and physically.

I don’t know how to ring the alarm bell any louder. When people start telling us they’re going to end their life because they can’t live in poverty anymore, it’s clear that we’ve failed them.

Charities like ours try to reach people who are falling through the cracks. But charities rely on the generosity of others, and if even they’re feeling pinched, people will go hungry. We’re hopeful that our holiday campaign will raise $1.7 million and 450,000 pounds of food, and we’re grateful for the support of Mississauga Mayor Bonnie Crombie in that campaign. But even if we reach that goal, that only keeps us going until Easter, when we’ll need more money and more food.

So far, the government’s approach to fighting inflation has been to keep businesses afloat, because the idea is that money will trickle down and support workers. And that’s just not working. We need to offset inflation in ways that don’t hurt the people we’re trying to help.

It takes all of us to feed our hungry neighbours, and this year is no different. But beyond supporting your local food bank, it’s going to take all of us to advocate for policies that will reduce poverty so that one day, we won’t need food banks anymore.

— As Told To Liza Agrba