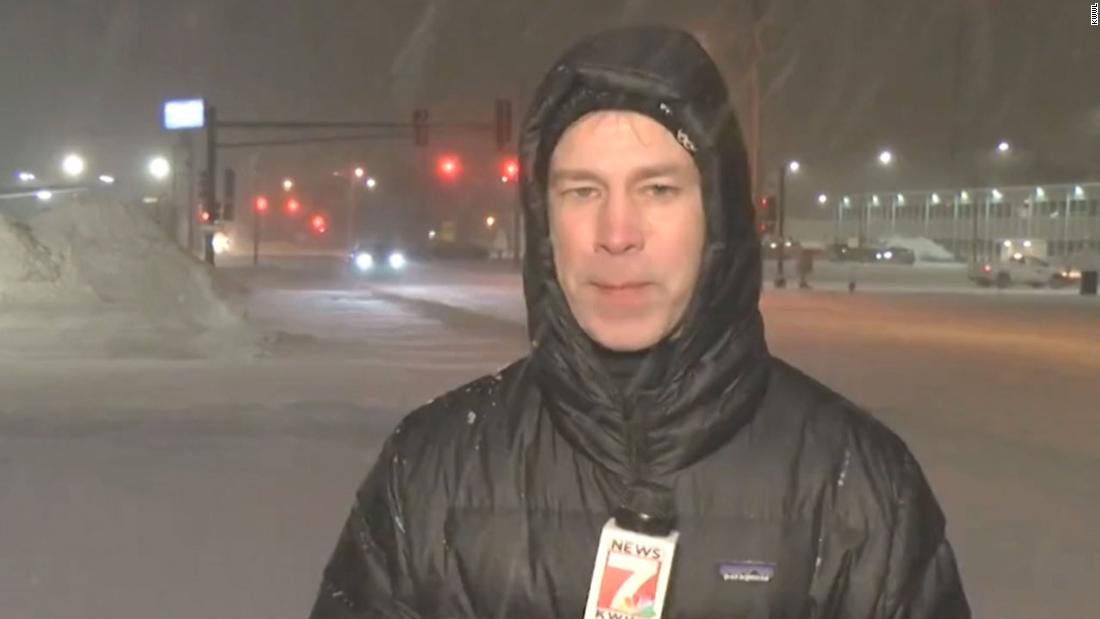 “I usually do sports, everything is canceled here for the next couple of days,” said a sarcastic Woodley in the video, standing outside in snow-covered Waterloo, Iowa. “So what better time to ask the sports guy to come in about five hours earlier than he would normally wake up, go stand out in the wind and the snow and the cold, and tell other people not to do the same?”

“I’m used to these evening shows that are only 30 minutes long, and generally on those shows I am inside,” he said in another segment. “This is a really long show, so tune in for the next couple hours to watch me progressively get crankier and crankier.”

“Can I go back to my regular job?” he griped at another moment. “I’m pretty sure you guys added an extra hour to this hour just because somebody likes torturing me.”

Woodley said that he “didn’t even realize” the channel had a 3:30 a.m. slot — and he didn’t find out he’d be covering that slot until the night before.

As a result, he only slept for around three hours before being sent out into the storm.

“Some of those things I probably wouldn’t have said if I slept for eight hours,” he joked in an interview with CNN on Friday.

Woodley said that his sarcastic remarks were “just a bit of who I am.”

“We cover these things every year, it’s all the same, and I think sometimes viewers tune it out, and I thought maybe if I bring a little attitude to it, viewers would pay attention,” he said. “It’s a very serious storm,” he said, and emphasized the importance of “making sure people know what they need to do to be safe.”

And luckily, Woodley’s managers approve of his on-air attitude.

“At least right now they’re on board with it,” he said. He explained that his offhand remarks were just fraction of the entire time he spent on air.

“It was my sister-in-law who said ‘you gotta tweet this,'” he said. “I put it on twitter, thinking 20-30 people are gonna see this, my managers aren’t gonna care, it’s not gonna go anywhere. Within hours I’m getting these text messages like ‘dude, you’re going viral, Judd aApatow retweeted you.'”

Woodley said that the video “was in good fun” though there “was some truth in it.”

“I think every reporter who’s done this has wanted to say it,” he said.

As for fans’ calls that he should pivot from sports to weather? “That is my absolute nightmare,” he said. “We’re a bit shorthanded, like every newsroom is in the country, that’s why I was in this situation.

“I’m a team player,” he went on. “If asked, sure, I’ll do it, but that would be my absolute nightmare. I hope to God they do not ask me to ever do that again.”