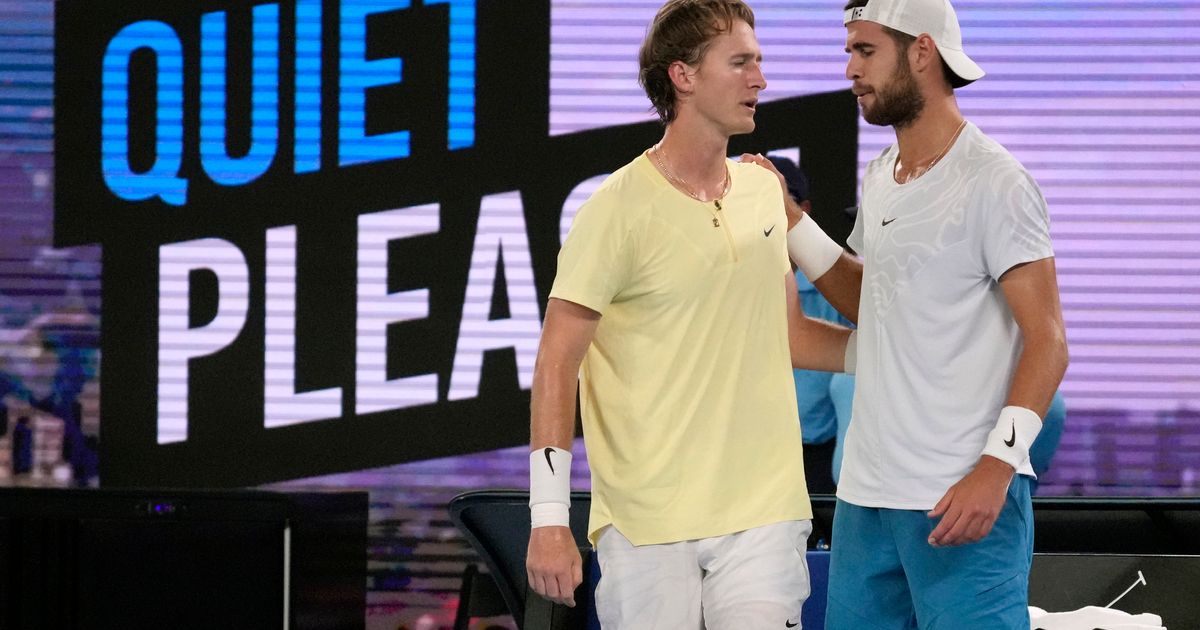 MELBOURNE, Australia (AP) — For a full set, Karen Khachanov’s Australian Open quarterfinal against Sebastian Korda on Tuesday was as tight as can be. Right up until, that is, Khachanov unleashed a down-the-line backhand to cap a 17-shot point and steal a tiebreaker.

Khachanov raised his right index finger to his ear, telling the Rod Laver Arena crowd to let him hear some support, then wagged that finger in a “No. 1!” gesture. Not long after that, early in the second set, Korda, a 22-year-old American whose father Petr was the 1998 champion in Australia, felt pain in his right wrist when he mis-hit a forehand service return. He called for a trainer to examine and tape it.

And early in the third, it was over, because Korda stopped playing while trailing 7-6 (5), 6-3, 3-0, allowing Khachanov to reach his first semifinal at Melbourne Park — and his second consecutive trip to the final four at a Grand Slam tournament, following his run at the U.S. Open last September.

Soon, Khachanov was doing an on-court winner’s interview, telling the spectators to offer applause for his injured opponent, while Korda was walking toward the locker room, a red equipment bag over his left shoulder and a dour look on his face.

“I kind of reinvented myself, I would say. I always believed in myself, but there are always ups and downs,” said Khachanov, a 26-year-old Russian who is seeded No. 8 in Australia. “And sometimes when you have this great result, it just shows you what you are capable of and you start to believe more and more.”

Korda’s wrist first bothered him during a tune-up tournament in Adelaide earlier this month, but he said it seemed to be fine over the past two weeks until Tuesday.

“I kind of felt that spot that I was feeling before,” Korda said. “Some forehands, I couldn’t even hold the racket. Volleying was almost impossible for me. So it was a little tough.”

Earlier Tuesday, reigning Wimbledon champion Elena Rybakina reached her first semifinal at Melbourne Park, beating 2017 French Open champion Jelena Ostapenko 6-2, 6-4 in a match delayed for about 20 minutes in the first set while the main stadium’s retractable roof was shut because of rain.

Rybakina, who hit 11 aces to take her tournament-leading total to 35, will play Jessica Pegula or Victoria Azarenka next.

“I got all the experience at Wimbledon, and it’s helping me now this time, here in Australia, and I know what to expect,” said No. 22 seed Rybakina, who was born in Moscow but has represented Kazakhstan since 2018 because it offered to fund her tennis career. “For sure, it’s just easier in this case.”

Khachanov will face either No. 3 Stefanos Tsitsipas of Greece or unseeded Jiri Lehecka of the Czech Republic for a berth in the men’s final. Tsitsipas and Lehecka were scheduled to play their quarterfinal Tuesday night.

Korda, who was seeded 29th, upset 2021 U.S. Open champion and two-time Australian Open runner-up Daniil Medvedev in the third round, then made it past No. 10 Hubert Hurkacz in five sets in the fourth round.

The younger Korda was one of three 20-something American men to get to the quarterfinals this time, the most for the country at the Australian Open since 2000. The other two, Ben Shelton and Tommy Paul, meet for a berth in the semifinals on Wednesday.

None of the three ever had been to the final eight at a major tournament.

“There is a lot of positives. I mean, way more positives than even negatives. Today was tough, but hopefully it’s nothing serious and I can take care of it so I don’t have it in the future,” Korda said, referring to his wrist. “I’m going to go forward with my head high and keep working.”