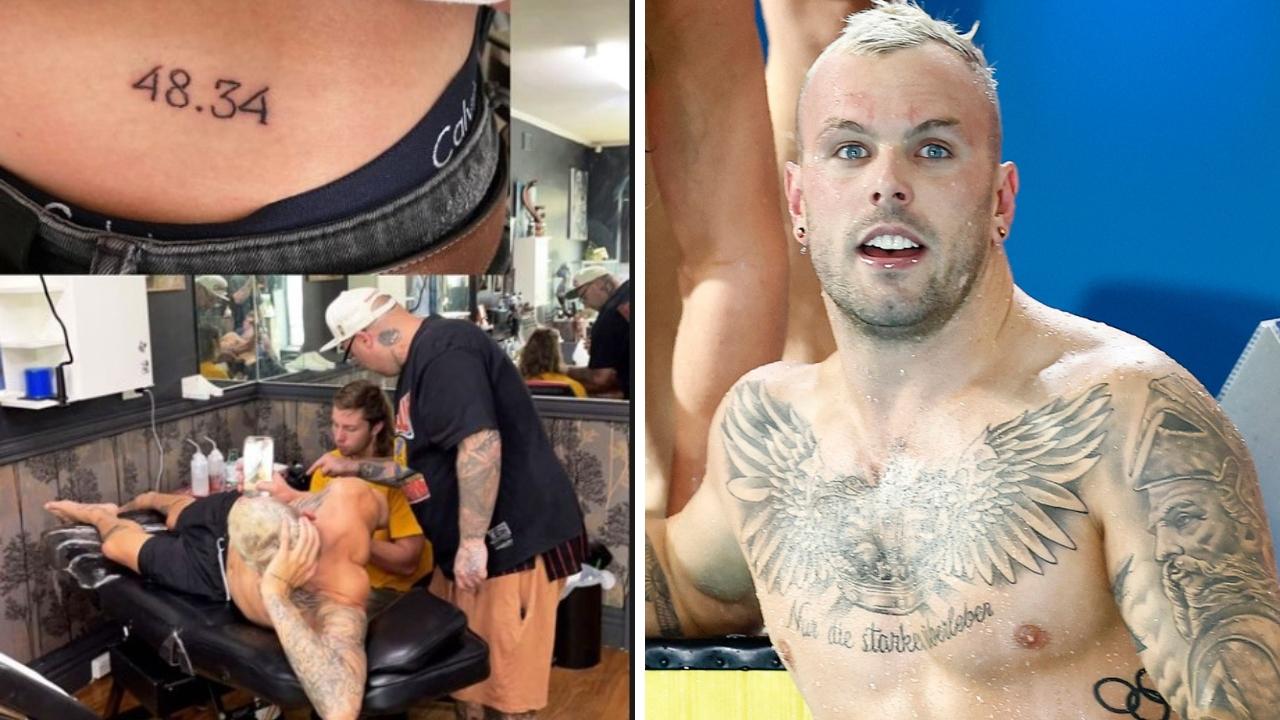 The world short course swimming championships hero had too many options to choose from as he walked into an Adelaide tattoo parlour recently after an historic medal haul in the Melbourne pool.

The South Australian caught fire in his relay events, blowing the world away with superhuman efforts in the men’s 4x100m medley relay and the 4x50m freestyle relay.

His 50m performance of 20.34 seconds — the fastest of the meet — saw him pull Australia from fifth position to win the gold medal.

He backed it up two days later with another mercurial swim, recording the fastest 100m short course split of all time, 44.63 seconds, in the medley event.

Any of the numbers mentioned above seem like obvious fuel to inspire another round of body ink, but Chalmers was instead captivated by another four-digit time.

With Matt Temple setting the fastest time of the entire meet with his butterfly leg in the medley relay — a 48.34 second mark — Chalmers took the extraordinary step of asking his teammate to document it on his body.

In photos posted on Chalmers’ Instagram page, Temple can be seen holding the tattoo gun as Chalmers sits on a bench. The tattoo appears to be located just above the belt line near his waist.

“Matt Temple putting his GOAT time on my journal,” Chalmers wrote on his Instagram stories.

If that wasn’t enough, Chalmers also let Peaty sign his dinkus onto his own calf muscle.

The three-time Olympic champion has been posting photos while holidaying with Chalmers in Adelaide.

It’s hardly the first time Chalmers has left his fans with their jaws hanging around their ankles when it comes to his body art.

He has spoken previously to point out to his fans he views his inkwork as a journal of his life.

His masterpiece work splashed across his chest has previously created plenty of headlines where he has been asked to explain text written in German.

The phrase translates as “only the strong survive” and is written in Deutsch because he studied the language at school where it was his favourite subject.

Fans can expect to see more additions to his skin canvas as he prepares for the 2023 World Championships in July and the 2024 Olympics in Paris.