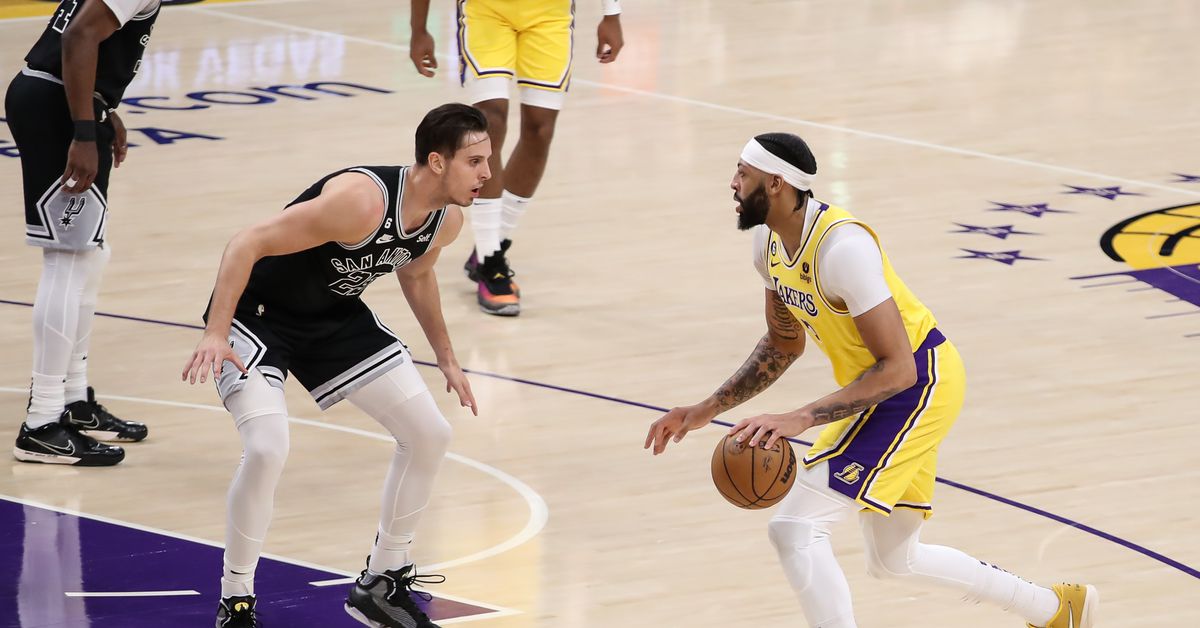 It wasn’t an easy win, but in the fourth, the Lakers did just enough to come out victorious against the San Antonio Spurs and swept the season series, the first time the Lakers have done that since the 1997-98 season. And with a 113-104 victory on the night of Anthony Davis’ return and Rui Hachimura’s debut, the Lakers improved to 23-26 on the season.

Davis scored 21 points in 26 minutes off the bench, the first time he’s come off the bench since 2013. Patrick Beverley had a productive night, scoring 18 points on 50% shooting, and LeBron James fell just short of a triple-double with 20 points, 9 rebounds and 11 assists.

One Laker scored the team’s first six points to start the game. That player was Beverley. After last night’s game, where it felt like LeBron was the only one getting it going offensively, tonight, there was much more balance to the offense.

But while the offense might’ve been balanced, the defense was absent. San Antonio went on a 13-1 run midway through the first to take the lead. Then at the 4:22 mark, Davis finally returned from injury and Hachimura made his debut for the purple and gold. There were no early fireworks from the pair, as neither made a field goal in the first frame and the Lakers trailed by five after the first 12 minutes.

But with the rust wearing off, AD got going in the second. He scored five straight to start the second and scored 10 in the quarter. Meanwhile, Rui finally made his first field goal in the second with a nice three and the Lakers closed out the half on a 7-0 run where LeBron, Russ and AD finally gelled well together.

L.A. started the second half well. Pat Bev followed up his fantastic first-half performance with an equally good second; he did everything but sell popcorn on Wednesday. He was hitting threes, grabbing rebounds and making the occasional hockey assist, helping the Lakers go on a 13-4 run midway through the third.

However, these Lakers can’t ever close anyone early.

San Antonio went on a 12-0 run as the Lakers defended the three poorly in transition and gave up easy layup after easy layup. Keldon Johnson was the beneficiary of this lack of defensive focus ending the night with 25 points.

“Let’s see what kind of mentality this Laker group has when this fourth quarter starts.” These were the word of Lakers broadcaster Stu Lantz as the game entered the final 12 minutes.

The response from the Lakers was appropriate.

They went on an 11-0 run which featured a pair of threes from James and Max Christie and an exclamation point dunk from Thomas Bryant. The rest of the fourth was smooth sailing for the purple and gold as they outscored San Antonio 32-22 in the fourth.

Davis had flashes of brilliance with some nice blocks and dunks, Rui (12 points and 6 rebounds on 4-7 shooting) looked nervous but serviceable, and the Lakers are slowly and surely heading in the right direction.

The main negative today was that Wenyen Gabriel was the victim of AD’s return. He’s averaging 16 minutes a game and was on track for a DNP-CD (Coach’s Decision) until getting 45 seconds of playing time in garbage time tonight. That wasn’t a popular choice on Twitter, and potentially unwise given the lack of depth this team has in the 4 and 5 spots.

Still, it’s better to win with problems than to lose because of them, so hopefully Darvin Ham can figure it out as the Lakers head East to play their rivals, the Boston Celtics, on Saturday.

For more Lakers talk, subscribe to the Silver Screen and Roll podcast feed on iTunes, Spotify, Stitcher or Google Podcasts. You can follow Edwin on Twitter at @ECreates88.