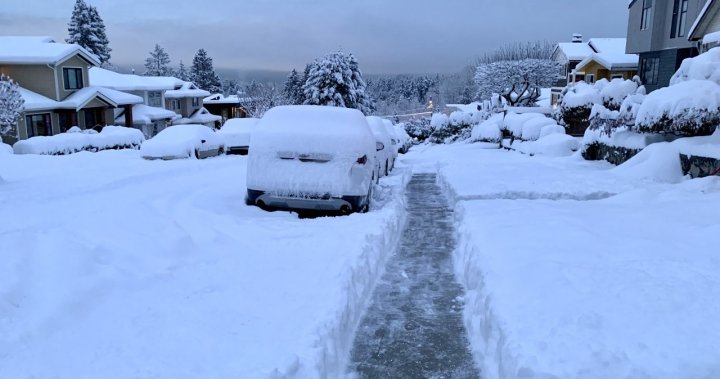 Drivers around B.C.’s Lower Mainland and Metro Vancouver are being asked to avoid non-essential travel Tuesday due to the heavy snowfall overnight.

In a statement, the Ministry of Transportation and Infrastructure said maintenance contractors are out in full force to clear snow and apply sand.

5:56
How is the province responding to latest round of winter weather in B.C.?


At least 25 centimetres of snow have fallen in the Greater Vancouver area and 30 cm on the Malahat and other areas of the Island. Environment Canada forecasts more snow during the next several hours.

Travel Advisories have been issued for the Coquihalla Highway between Hope and Kamloops and Highway 97C between Merritt and Kelowna due to heavy snowfall and strong winds.

Drivers who have to be on the roads are asked to move over safely when they see a vehicle with an amber light approaching as this will allow maintenance crews to clear the snow and improve road conditions.

Transportation Minister Rob Fleming praised the work of snow-removal crews, who he said were on major routes across the province all night.

“You look at Highway 1, the Malahat, on Vancouver Island, even with over 35 cm of snow it’s returned to bare pavement, it was ploughed throughout the night,” Fleming said.

“Most of the major highways in the Lower Mainland received several passes of ploughing, but the snow came down fast and heavy. I can’t remember the last time Richmond had 35 cm of snow, but that’s the situation on the ground.”

Fleming also thanked the public for their patience — and for staying off the roads, where they could.

Compared to the snowstorm at the end of November that paralyzed major routes across the Lower Mainland, there were far fewer calls for tow trucks, and plows were able to do their jobs without getting caught in congestion, he said.

“Obviously a vastly lower volume of vehicles on the roads, we didn’t have congestion and spinouts, people who maybe in the first pass of winter this season took out their cars with tires that aren’t suitable for the condition aren’t doing that as frequently,” he said.

Snow plows from @MainroadLM off and running this morning on #BChwy17 going eastbound in #DeltaBC just before 80th.
Please give them space to do their jobs. pic.twitter.com/5j2bmCIjLb

More than 1,200 ICBC claims filed on Sunday as Lower Mainland hammered by winter


There are also major TransLink service disruptions due to the heavy snow.

Many commuters were delayed at the Lafarge Lake-Douglas Station when the gates didn’t open on time. TransLink said staff could not get there in time to open them.

In addition, TransLink said all SkyTrains are running Tuesday but will likely be delayed and slower.

Many buses are also not running Tuesday morning and TransLink is urging everyone to check their routes before heading out of the house.

On Monday, the province assured drivers that crews were ready to clear roads during the winter conditions.

“The contractors are out in full force. We’ve got 100 pieces of equipment out in the Lower Mainland alone, out there snowplowing, brining, putting out winter abrasives and sand and we have similar numbers on the island as well,” said Ashok Bhatti, executive director for the South Coast region with the Ministry of Transportation and Infrastructure, on  Monday.