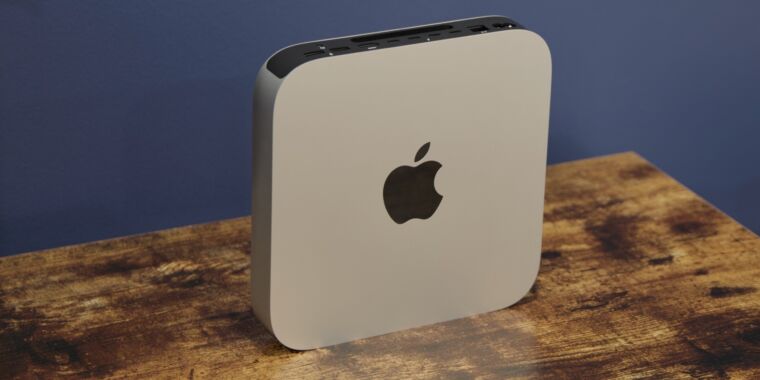 Apple’s Mac Studio was its most interesting desktop in years. It lacks the internal expandability of the Mac Pro, but the raw performance and power efficiency of the M1 Max and M1 Ultra plus a great port selection make it a viable option for plenty of people who would have bought a fully loaded 27-inch iMac or a low-to-mid-end Mac Pro in the Intel era.

But the $2,000-and-up desktop is still overkill for a lot of people, even for pros and power users. There was a lot of room between the cheapest Studio and the best M1 Mac mini for a cheaper-but-more-capable system, something for people who could benefit from pro-level performance and extra ports occasionally but who don’t need them often enough to justify dropping the money on a Mac Studio.

Enter the new Mac minis. Both the M2 and M2 Pro versions are augmented in ways that will benefit multi-monitor multitasking workstations, and they can do so for substantially less money than the Studio—the M2 mini starts at $599, $100 cheaper than the M1 mini and cheaper than any Mac mini has been since 2014. Apple sent us the M2 Pro version of the mini to review, and for many price-conscious power users who prefer or require macOS, it injects just the right amount of Mac Studio performance into the mini’s 13-year-old design.

The M1 and M2 Mac minis are impossible to tell apart from the outside. Both have the same measurements, the same finish, and the same array of ports: two USB-A ports, two Thunderbolt 4 ports, one HDMI port, a gigabit Ethernet port (configurable to 10 gigabit), and a headphone jack.

The M2 Pro version adds an extra pair of Thunderbolt 4 ports, which makes it look exactly like the old 2018 Mac mini from the back (technically, the M2 Pro mini is an upgrade for the 2018 mini, which Apple continued to sell throughout 2021 and 2022). I wish the 2018 mini’s space gray finish was an option here instead of the standard silver, but it’s a minor cosmetic complaint.

As for functional complaints, I wish the Mac Studio’s acknowledgment that ports on the front of a computer can be useful was extended to the mini. There’s certainly less space inside a mini’s case than the Studio’s, but this is 2010’s case design with 2023’s parts inside it—USB-C ports and card readers have been worked into tighter quarters. Apple Silicon-era Mac designs have subtly tilted Apple’s design philosophy toward function over form, with their front-mounted ports and HDMI and MagSafe connectors and reliable keyboards, and it’d be nice to see the mini get a dose of that, too.

The design is otherwise unsurprising. The M2 Pro model has a marginally higher-wattage internal power supply than the regular M2 (185 W, up from 150 W). But there’s no difference in weight between the M2 and M2 Pro models, suggesting that both versions use the same fan and heatsink design. And in our testing, the M2 Pro mini runs just as cool and quiet as the M1 mini did.