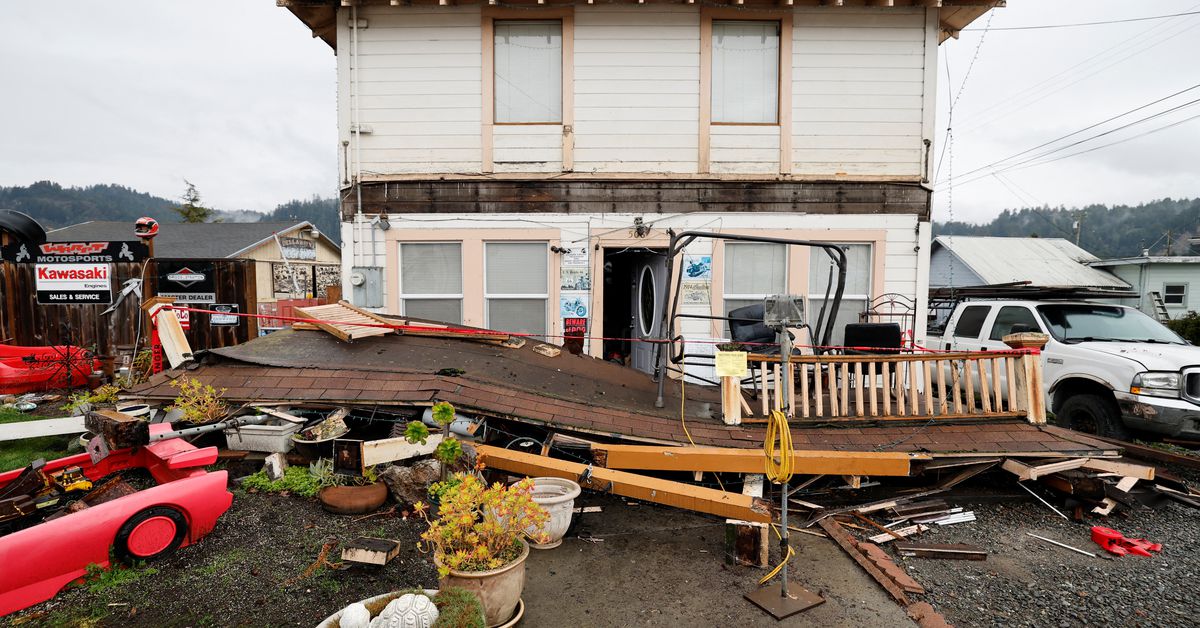 The tremor, which struck at 2:30 a.m. PST and was followed by more than three dozen aftershocks, was centered 215 miles (350 km) north of San Francisco offshore of Humboldt County, a largely rural area known for its redwood forests, local seafood, lumber industry and dairy farms.

The region also is known for relatively frequent seismic activity, although the latest quake appeared to cause more disruption than others in recent years.

Tuesday’s temblor set off one structure fire, which was quickly extinguished, and caused two other buildings to collapse, according to the California Department of Forestry and Fire Protection (CalFire).

The department said its dispatchers fielded 70 emergency calls after the quake, including one report of a person left trapped who needed rescuing, spokesperson Tran Beyea said.

The county sheriff’s office reported two people injured near the quake’s epicenter, where damage to homes and roads was widespread. One of those victims was a child with a head injury and the other an older person with a broken hip, according to local media reports citing the sheriff’s office.

There were no immediate official reports of fatalities.

Police closed the main bridge crossing the Eel River into Ferndale, a picturesque town notable for its gingerbread-style Victorian storefronts and homes, after four large cracks were discovered in the span. The California Highway Patrol also said the roadway foundation there was at risk of sliding.

The highway patrol reported at least four other roads in Humboldt County closed due to earthquake damage, and a possible gas line rupture under investigation. One section of roadway was reportedly sinking, the agency said.

“The shaking was really intense,” said Daniel Holsapple, 33, a resident of nearby Arcata, who recounted grabbing his pet cat and running outside after he was jostled awake in pitch darkness by the motion of the house and an emergency alert from his cellphone.

[1/7] The collapsed second story porch of a house is seen after a strong 6.4-magnitude earthquake struck off the coast of northern California, in Rio Dell, California, U.S. December 20, 2022. REUTERS/Fred Greaves

“There was no seeing what was going on. It was just the sensation and that general low rumbling sound of the foundation of the whole house vibrating,” he said.

Janet Calderon, 32, who lives in the adjacent town of Eureka, said she was already awake and noticed her two cats seemed agitated moments before the quake struck, shaking her second-flood bedroom “really hard.”

“Everything on my desk fell over,” she said.

While earthquakes producing noticeable shaking are routine in California, tremors at a magnitude 6.4 are less commonplace and potentially dangerous, capable of causing substantial damage to buildings, such as a partial collapse or the shifting of structures off their foundations.

Weak shaking from Tuesday’s quake, which occurred at the relatively shallow depth of 11.1 miles (17.9 km) was felt as far away as San Francisco, the U.S. Geological Survey reported.

About five earthquakes of magnitudes ranging from 6.0 to 7.0 are recorded annually in California and Nevada, according to recent data cited by the Los Angeles Times.

Caroline Titus, the former editor and publisher of the Ferndale Enterprise, posted video on Twitter of toppled furniture and household items scattered on the floor of her Ferndale home.

“Sorry for dark video,” she wrote. “Power still out.”

Some 79,000 homes and businesses were without power in Ferndale and surrounding Humboldt County, according to the electric grid tracking website PowerOutage.us.

PG&E crews were out assessing the utility’s gas and electric system for any damage and hazards, which could take several days, company spokesperson Karly Hernandez said.