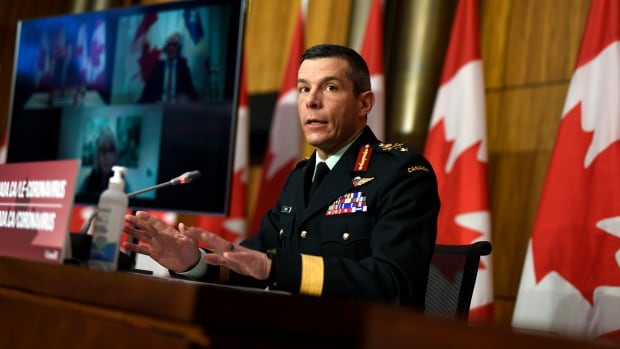 The military will not take administrative action against Maj.-Gen. Dany Fortin after his commander concluded he does not believe Fortin committed sexual assault on campus when he was a cadet more than 30 years ago.

A Quebec judge acquitted Fortin in December of one count of sexual assault laid in response to an alleged incident in 1988 at the Royal Military College in Saint-Jean-sur-Richelieu, Que.

The judge said that while he believed the complainant was sexually assaulted, he was not convinced beyond a reasonable doubt that her assailant was Fortin.

After Fortin’s trial wrapped up, the military conducted its own review to decide if he should face career consequences based on a burden of proof that’s easier to meet than the one employed at criminal trials.

The Department of National Defence (DND) said Vice-Admiral Bob Auchterlonie reviewed Fortin’s case and concluded that “based on the balance of probabilities, he did not engage in sexual misconduct.”

“As such, the process did not result in any administrative action and an administrative review is not required,” said DND spokesperson Daniel Le Bouthillier in a statement to CBC News.

“There are no words to describe my disappointment,” said the complainant, whose identity is protected under a court-ordered public ban.

“This is exactly why women don’t come forward. Nothing has encouraged change toward trusting senior leadership to follow the policies and procedures when it comes to their own.”

Fortin, who has maintained he never had physical contact with the complainant, took issue with DND saying his case is “resolved.”

“I strongly disagree with the notion that my issue has reached ‘resolution’ stage,” said Fortin in a statement sent to CBC News.

Fortin has filed an official complaint with the Military Police Complaints Commission. He said he has concerns with how the military police handled his case.

A judge has acquitted Maj.-Gen. Dany Fortin, who once led Canada’s COVID-19 vaccine rollout, of one count of sexual assault following a trial this fall. Fortin says he is now planning his next legal move, saying his career was derailed by a lack of due process.

He also plans to move forward with his federal court appeal. Fortin alleges the government removed him from his role as the head of Canada’s vaccine task force in 2021 without due process and as a result of political interference. The government has denied the claims.

Fortin said he wants work assignments appropriate to his rank and experience.

“I am looking forward to serving Canadians in a Canadian Armed Forces position that is commensurate with my rank and experience,” he said. “My current assignment certainly does not meet that definition.”

He said he’s currently a senior adviser to the commander of Canadian Joint Operations Command and hasn’t been assigned any work since 2021, when the investigation first launched.

Fortin said he’s had four jobs as a two-star general — as the commander of 1 Canadian Division, Chief of Staff at Canadian Joint Operations Command, commander of the NATO training mission in Iraq and head of Canada’s COVID-19 task force.