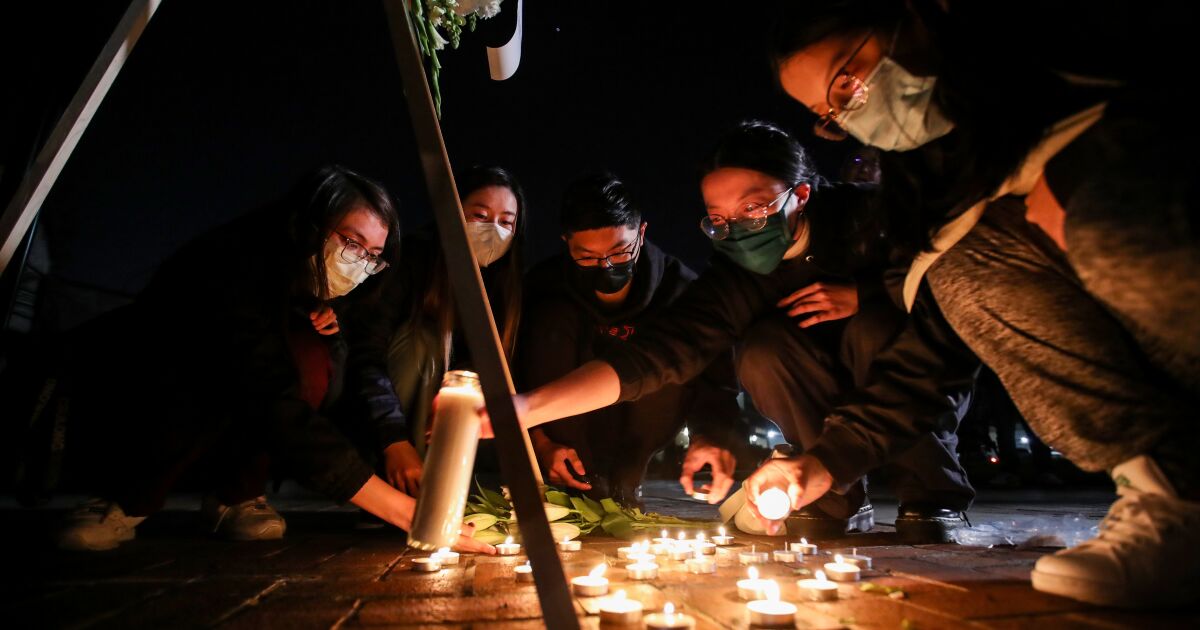 Two weeks before he went on a shooting rampage at a dance studio in Monterey Park, Huu Can Tran showed up in the lobby of a police station 80 miles away to report some far-fetched allegations.

The 72-year-old man told police in Hemet, a small city east of Los Angeles where he lived in a trailer park, that family members had tried to poison him many years earlier. He also claimed to have been the victim of fraud and theft, according to a police account of the meetings. He promised to return with evidence, but never did.

The odd visits, which he made two days apart earlier this month, offer a glimpse into the troubled mind of the man who opened fire on a festive crowd at Star Ballroom Dance Studio in Monterey Park on the eve of Lunar New Year, killing 11 people and wounding nine others. After the shooting, Tran drove to another studio nearby, seemingly intent on continuing his killing rampage, but a man there wrested away his weapon and chased him off.

On Monday investigators continued to work to try to understand what pushed Tran to such violence, zeroing in on his frequent attendance at the two dance studios and the possibility he was driven by jealousy or some other personal resentment, according to law enforcement sources.

Los Angeles County Sheriff Robert Luna offered a few new details Monday about the dark world Tran inhabited. During a search of his home Sunday night in a trailer park in Hemet, Luna said police found hundreds of rounds of ammunition and uncovered evidence Tran was “manufacturing homemade firearm suppressors,” which muffle the sound of a weapon firing. Tran, he added, appeared to have been arrested only once — in 1990 on suspicion of unlawful possession of a firearm.

And at the scene of the shooting, investigators recovered 42 shell casings — one for each of the bullets Tran fired in his fusillade — a handgun manufactured in China and a large-capacity magazine, Luna said.

What else is known about the gunman is gleaned from scant paper trails left from a petty court battle over a security deposit and a divorce, as well as accounts from a few neighbors and friends. Together, they offer a fragmented portrait of a lonely, embittered man for whom dancing may have offered a rare reprieve from an otherwise empty life.

A former friend of Tran, who was also his tenant for years and ended up suing him in 2014 when Tran refused to fully return his security deposit, described Tran as a loner who rarely had visitors and was typically alone except when he was dancing at Star Studio or the Lai Lai Ballroom & Studio, where he drove after the shooting.

“Two simple words that cover the whole thing. He’s a person of distrust. He distrusts people around him. Second word is hate. He hates people around him, especially if he thought someone was doing bad on him,” said the former tenant, who asked not to be named. “He would say, ‘Someday I will get back at you, get even, get revenge.’

“I think his life was so miserable and desperate that he chose that day to end his life and meanwhile he wanted to get people he didn’t like or hated to go with him,” the man said.

After their court dispute, the men remained friends and moved into apartments in the same complex, the man said. Besides dancing, Tran liked to get meals. The two of them would go to restaurants for lunch, never dinner, and would eat classic Chinese staples like dumplings.

He knew Tran to work only a very small amount of time as a carpet cleaner for restaurants. “I seldom saw him go out to work,” he said. “That was the only job he had. He led a very simple life.”

Their once cordial relationship soured when he left for a month to visit Taiwan, upsetting Tran for no clear reason. When he returned, Tran gave him the cold shoulder.

The former friend said Tran occasionally spoke of an ex-wife, complaining that she had led him astray by persuading him to close a trucking business he owned and sell his truck.

Business records filed with the state show Tran started Tran’s Trucking Inc. in 2002 and registered the company in San Gabriel. He dissolved it two years later.

He married his wife in June 2001 and the couple filed for divorce in December 2005, court records show. The woman could not be reached for comment.

Tran seemed happy only when he was dancing, the former friend said.

“That’s the only two places he went pretty much every night,” the man said, referencing the Monterey Park studio and the second studio in Alhambra where he drove right after the shooting.

A Monterey Park resident who would identify herself only as Grace said she had gone to the dance studio, most recently in December, and knew many people who went regularly.

On a WeChat group, she said, the studio’s customers were sharing unconfirmed reports Tran had been jealous that a woman he knew had gone dancing without him on Saturday night and that he went to the studios in a rage searching for her.

Tran had been living at the Lakes at Hemet West, a mobile home park whose sign billed it as “a 55+ active living community,” according to a public record and law enforcement sources. A security guard turned away a Times reporter at the front gate Sunday night.

A resident there, Karen Howard, said Tran “seemed like a perfectly normal neighbor.”

Before moving to Hemet, Tran lived for many years in a small white stucco home in San Gabriel with bars over the doors and windows and an orange tree in the front yard, according to a neighbor.

The man lived across the street from Tran, whom he knew as Andy, and described him as a polite neighbor who helped him jump-start his car.

“He was kind to us, but he was very private,” said the neighbor, who declined to give his name because he didn’t want to be associated with Tran. He never revealed much of his background and kept his personal life to himself, the neighbor said.

A woman appeared to live at the house with Tran for periods, but “the majority of the time he was by himself,” the neighbor said. The police were called to the house several times over the years for unknown reasons, he added.

He believes Tran owned a rug-cleaning business. He recalled him driving a white cargo van that looked similar to the one Tran was driving when police stopped him in Torrance the day after the shooting, although that van looked newer. Tran was found dead at the wheel from a self-inflicted gunshot.

Tran did not seem to be a wealthy man, but he kept an old beige Rolls-Royce parked behind his house and drove a Mercedes-Benz that ran on biodiesel, the neighbor said. “Every once in a while he would pull it out,” he recalled about the Rolls-Royce.

James Densley, president of the nonprofit Violence Project, which tracks mass shootings, said Tran is the oldest shooter in the organization’s database, which dates to 1966. He said mass shootings are “always intended to be a final act” by the shooter — be it by suicide, death or eventual imprisonment.

“I think that is maybe the biggest takeaway here: What would be enough to drive a 72-year-old man to perpetrate a crime like this?” Densley said. “I think what it really comes down to is, they have reached their final breaking point and they no longer care if they live or die.”