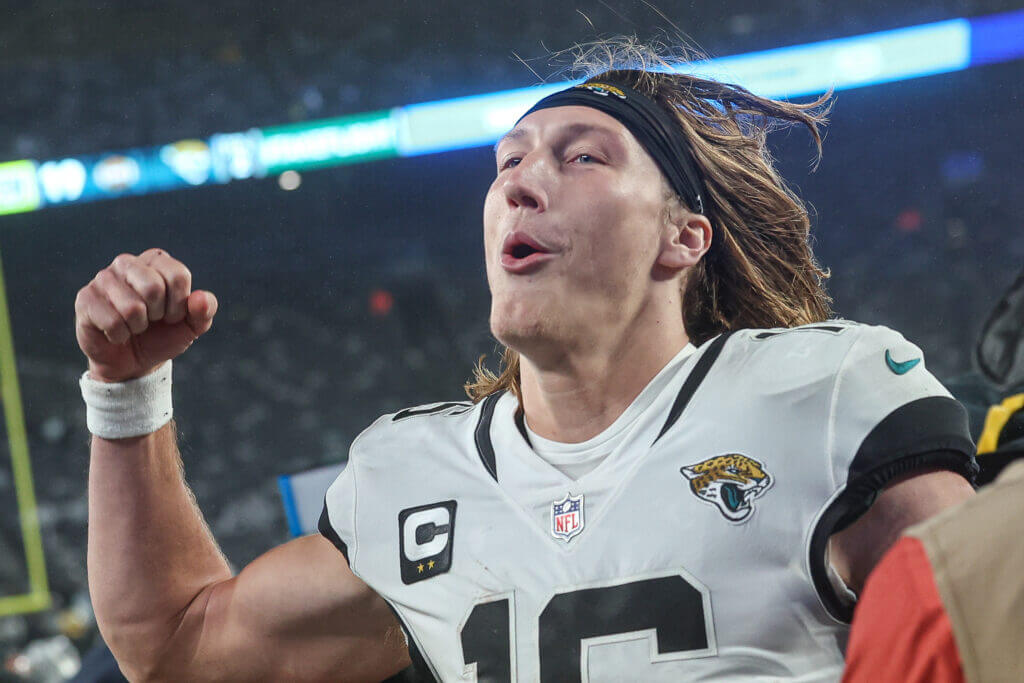 Half of the 14 playoff spots are clinched after the first game of Week 16. Here’s where the NFL playoff picture stands following the Jaguars’ 19-3 win over the Jets on Thursday night. Listed odds to make the playoffs, secure the No. 1 seed and win the Super Bowl are all via The Athletic’s NFL betting model, created by Austin Mock. The projected playoff chances have been adjusted to account for possible Week 18 rest scenarios and injuries to quarterbacks Jalen Hurts, Lamar Jackson and Ryan Tannehill.

Remaining schedule: at Bears, at Bengals, vs. Patriots

The Chiefs clinched their seventh straight AFC West title in Week 15, so the chase for the No. 1 seed is all that’s left for them. After losing head-to-head matchups against both the Bills and Bengals, the Chiefs will need to finish with a better record than both those teams in order to secure a first-round bye and home-field advantage through the conference championship round.

Remaining schedule: vs. Seahawks, vs. Broncos, at Raiders

The Jets’ loss to the Jaguars on Thursday clinched a playoff berth for the Bengals. Cincinnati last made consecutive playoff appearances during its five-year run from 2011-2015. Our model gives the Bengals a 68.5 percent chance to win the AFC North.

Remaining schedule: at Patriots, vs. Bills, vs. Ravens

The Jaguars’ win on Thursday night puts more pressure on the Titans, who have lost four straight, will “most likely” be without Ryan Tannehill for the rest of the season and now hold just a half-game lead in the AFC South standings ahead of Tennessee’s Week 16 game against the Texans.

The Jaguars won the first head-to-head meeting with the Titans. The second head-to-head — in Jacksonville in Week 18 — is setting up to be a winner-take-all matchup so long as the Jaguars post an identical or better record than the Titans over the next two weeks.

If the Titans enter Week 18 a game ahead of the Jaguars, a Jacksonville win in the regular season finale would even the two teams’ overall records and give the Jaguars the head-to-head tiebreaker.

If the Jaguars enter Week 18 a game ahead of the Titans, a Tennessee win would give the Titans the division based on a superior divisional record, as both teams would enter their regular-season finale 3-2 against the AFC South in this scenario. Like the Titans, the Jaguars have one more game against the Texans on their schedule.

Our model gives Tennessee a 46.3 percent chance of winning the AFC South for the third year in a row.

Remaining schedule: vs. Texans, vs. Cowboys, at Jaguars

The Ravens can clinch a playoff berth this weekend with any of five scenarios that involve wins or ties by them and wins, losses or ties by as many as seven other teams. There is even a scenario that gets Baltimore in regardless of its result if the Patriots lose, the Browns, Raiders and Titans lose or tie, and the Chargers win.

But as The Athletic’s Jeff Zrebiec writes, it’ll be difficult to consider the Ravens a serious contender come playoff time without a version of Lamar Jackson who can put this team on his back. The quarterback will miss his third straight game with a knee injury.

Remaining schedule: vs. Falcons, vs. Steelers, at Bengals

The Chargers clinch a playoff berth with a win at Indianapolis on Monday and a combination of losses or ties by the Raiders, Patriots, Jets and/or Dolphins. According to our model, they face the seventh-easiest remaining schedule, starting with a trip to Indianapolis to face a Colts team that will start quarterback Nick Foles for the first time this weekend.

The Chargers hold the head-to-head tiebreaker over the Dolphins and have a better conference record (6-4) than a couple of seven-win teams: the Patriots (5-4) and the Jets (5-6). The Jaguars are also 6-4 against the AFC following their Thursday night win.

Remaining schedule: at Colts, vs. Rams, at Broncos

Losers of three straight, the Dolphins can’t clinch a playoff berth this weekend. Their upcoming games against the Patriots and Jets are potentially high-leverage, given both teams currently sit close behind them in the standings.

Remaining schedule: vs. Packers, at Patriots, vs. Jets

The Eagles, who will be without Jalen Hurts this weekend, punched their playoff ticket in Week 14 but have yet to officially clinch the NFC East or secure the No. 1 seed. Here’s how they can do both in Week 16:

Remaining schedule: at Cowboys, vs. Saints, vs. Giants

Even if the Vikings lose out, they can’t finish worse than the No. 3 seed. They can thank the sad state of the NFC South for that.

According to our model, Minnesota has the sixth-easiest remaining schedule.

Remaining schedule: vs. Giants, at Packers, at Bears

The 49ers recognize their odds of securing the No. 1 seed are slim, but San Francisco made clear this week that it is shooting to win out and overtake the Vikings for the No. 2 seed.

Remaining schedule: vs. Commanders, at Raiders, vs. Cardinals

The 6-8 Bucs remain one game ahead of the three other teams in their division, all of whom are 5-9. Amazingly, the Panthers control their own fate, as they won their first matchup against the Bucs. The second comes in Tampa in Week 17. Our model gives Carolina a 10.4 percent chance to win the NFC South, compared to 83.7 percent for the Bucs.

Remaining schedule: at Cardinals, vs. Panthers, at Falcons

The Cowboys clinched a playoff spot last week when the Giants beat the Commanders, but according to our model, Dallas holds just a 3.6 percent chance of winning the NFC East and a 1.8 percent chance at securing the No. 1 seed.

Remaining schedule: vs. Eagles, at Titans, at Commanders

The Giants can secure their first playoff berth since 2016 this weekend with a win against the Vikings and a combination of losses by the Commanders, Lions and Seahawks. Just a win in Minnesota would push the Giants’ playoff odds over 90 percent.

Remaining schedule: at Vikings, vs. Colts, at Eagles

NFL Playoff scenarios for Week 16: Who benefits and loses with each result?

Washington ceded major playoff leverage by losing to the Giants last week. The Commanders are a seven-point underdog for their road matchup against the 49ers.

Remaining schedule: at 49ers, vs. Browns, vs. Cowboys